An intense low-pressure system that is forecast to affect Ireland and southern Britain on Saturday, October 21 has been named as Storm Brian by Met Éireann, the Irish National Meteorological Service. Before it makes landfall, the system is undergoing explosive cyclogenesis far out in the Atlantic. However, by the time it reaches Britain and Ireland this phase is expected to be complete and it will be a mature, deep low, bringing strong winds with the potential to affect travel over the weekend.

Met Éireann, the UK Met Office’s Irish partner took the decision earlier today to issue an Orange warning for some parts of Ireland on Saturday because of expected impacts across the Irish Republic. Under the collaboration between the Met Office and Met Éireann, storms are named when they have the potential to cause an amber/orange or red warning.

Friday, October 20 will start out dry and clear with light winds, Met Éireann forecasters said. Cloud will thicken this morning in the southwest and heavy rain, accompanied by strengthening southeast winds, will arrive before noon. The strong winds and rain, associated with Storm Brian, will spread quickly through the afternoon to all areas.

The rain will clear to heavy showers with a risk of thunder tonight. The winds will veer to the southwest overnight, becoming variable in direction as the eye of the storm passes over the country, before further veering west to northwest by the morning. On the southwest and south coasts, the west to northwest winds will reach storm force. Lowest expected temperatures are between 7 to 10 °C (44 – 50 °F).

On Saturday morning, October 21, west to northwest winds will reach storm force along coasts of the west and south, winds over land will be strong and gusty and will peak in the afternoon. The strong winds will be accompanied by heavy showers with a risk of thunder.

Showers will become mostly confined to western and northern coasts on Saturday night and a lot of areas will be dry. Strong northwesterly winds will gradually ease overnight and become westerly in direction.

There'll be sunny spells and scattered showers for much of Sunday, October 22 but later in the day, a spell of persistent rain will sweep through the country, turning heavy for a time. Temperatures will be between 12 and 14 °C (53 and 57 °F) and moderate, occasionally fresh, southwest winds will back southwest to south. Sunday night will become mostly dry as the last of the showery rain clears eastwards.

Any lingering rain will clear on Monday morning, October 23 and there'll be scattered showers, mostly on coasts. Temperatures will range from 14 °C (57 °F) in the north to 17 °C (63 °F) on the south coast and winds will be moderate southerly, veering southwesterly with the clearing rain. Continuing unsettled weather is expected on Tuesday, October 24 with another spell of rain and moderate to fresh southwest winds. 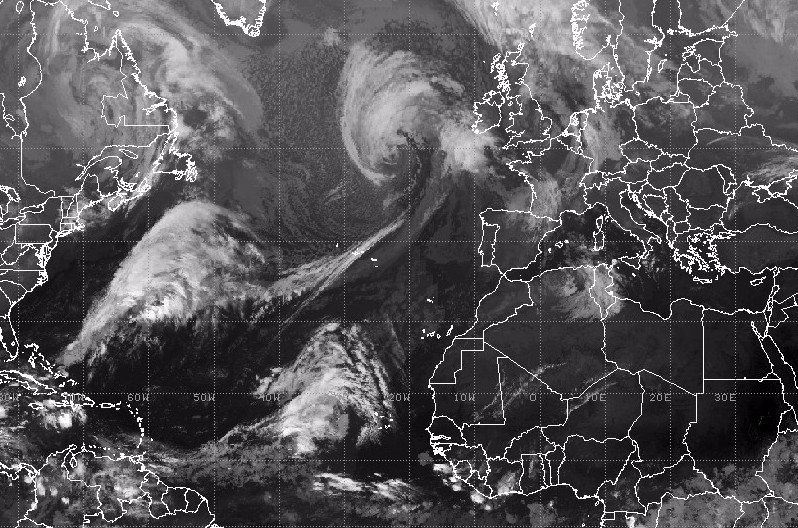 The UK Met Office issued their Yellow wind warning for strong southwesterly winds, valid Saturday from 04:00 local time, covering parts of southern and western England and South and West Wales. Currently, the Met Office has no plans to issue an Amber wind warning for any part of the UK, but the situation will be under continual review, it said.

"Storm Brian is expected to bring strong winds to southern and western areas early on Saturday morning. The first and most significant land-based impacts will be in the southwest of Ireland, hence the Amber warning from Met Éireann. At the moment, we don’t expect the same level of impacts for the UK," Chief Forecaster Dan Suri said.

"As we go through Saturday morning and early afternoon the strong southwesterly winds affecting the South West will transfer east and slowly change direction as they will become westerly towards the end of the warning period. Gusts exceeding 80 km/h (50 mph) are expected widely within the warning area, with gusts of around 112 km/h (70 mph) along exposed coastal areas. These are expected to coincide with high tides, leading to locally dangerous conditions in coastal parts."

Before it makes landfall, the system is undergoing explosive cyclogenesis far out in the Atlantic. However, by the time it reaches Britain and Ireland this phase is expected to be complete and it will be a mature, deep low, bringing strong winds with the potential to affect travel over the weekend.

As the system is expected to bring strong gusts during Saturday, there is the obvious potential of risk to travelers.

"Drivers encountering high winds are advised to reduce their speed, ensure they hold the steering wheel firmly and be prepared for sudden gusts, debris and even fallen branches in the road. Allow plenty of room between your vehicle and the next and take extra care when overtaking cyclists, motorcyclists, and lorries as they are susceptible to being blown around easily by side winds. Be extra cautious when driving on exposed roads, high ground and across bridges where again sudden gusts can blow you off course," RAC spokesman Pete Williams said.

"When you reach your destination consider parking safely avoiding trees, overhanging telephone wires and things which could represent a falling danger," Williams added.

Alison Baptiste, National flood duty manager for the Environment Agency, reminded that some coastal flooding is possible along the south and south-west coasts of England, especially around the times of high tide, with large waves, spray and some overtopping of coastal defenses.

"We urge people to stay safe along the coast and warn against putting yourself in unnecessary danger by taking ‘storm selfies’ or driving through flood water – just 30 cm (11.8 inches) is enough to move your car. Environment Agency teams are on the ground checking defenses and taking precautionary measures such as closing tidal gates," Baptiste said.

Storm Brian is the second named storm of the season, following Aileen which affected parts of the UK on September 12 and 13, 2017.

Ex-hurricane "Ophelia" which affected Ireland and Britain on Monday and Tuesday, October 16 and 17 had a different origin as it developed from a hurricane in the tropical Atlantic. Therefore, Ophelia’s original name was continued rather than using the next predetermined name from the UK and Ireland’s storm-naming process.