Hurricane "Nate" spawned multiple tornadoes across both Carolinas on Sunday, October 8, 2017, forcing evacuations and causing significant damage. As of 07:25 UTC on Monday, October 9, NWS has 22 preliminary tornado reports, 9 from North Carolina and 13 from South Carolina.

Four tornado reports come from Laurens County in South Carolina where a suspected tornado near 4 WSW Cross Hill damaged a building and downed power lines at 20:10 UTC. At 3 NNE Waterloo, several trees were uprooted and trees snapped off along Highway 39 near Beaverdam Church Road at 20:15 UTC. The third report from Laurens County comes from 6 NE Laurens at 20:45 UTC where numerous trees were reported down with many snapped off along Highway 49 near Laurens Academy just north of I385. The worst damage so far in the county comes from 3 ENE Laurens at 21:00 UTC where reports mention significant damage to houses around Cashew Trail and Curry Road area.

In Newbery County, South Carolina, a suspected tornado touched down around 20:26 UTC near 4 NW Chappels where police reported at least one severely damaged house roof and multiple sheds demolished on Salter Road near Highway 39 in Chappels.

Four reports came in from the Pickens County where a suspected tornado touched down around 20:51 UTC near Norris whose police department reported multiple trees and power lines down. At 20:54 UTC, multiple trees and power lines were reported down near 2 WSW Pickens. Several roofs were torn off homes along Liberty Highway in Liberty around 20:55 UTC. The fourth report came in from 4 S Liberty at 21:00 UTC where a single family home lost roof along Bradley Drive.

Another three reports came in from Spartanburg County where trees were reported down and snapped in half near 4 ENE Enoree and 5 SSE Pauline at 20:57 and 21:15 UTC. The worst damage in Spartanburg appears to in 2 SE Pauline where one structure was damaged along with about 40 to 50 trees down near Highways 150 and 215.

Damage was reported to a trailer, siding, storage building and shingles near 4 W Buffalo in Union County at 21:35 UTC. Trees were also reported down and one flagpole was broken. 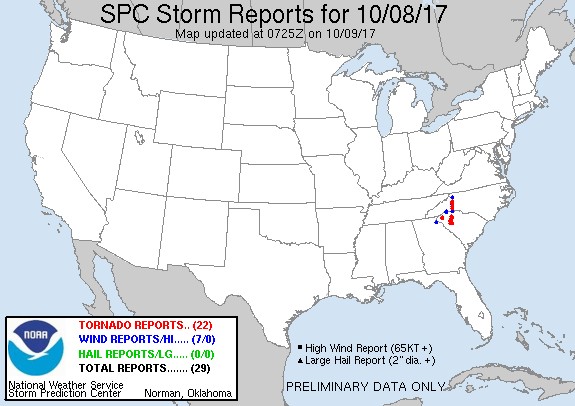 Two reports came in from Cleveland County, North Carolina where multiple power lines snapped off Highway 182 and Charlie Randall Road near 2 E Polkville at 21:00 UTC. Trees were reported down and snapped off along Ankle Road and Dirty Ankle Road near 4 NE Casar at 21:15 UTC.

#Tornado in Lawndale, Cleveland County, NC is one of ~13 via @DrGregForbes spun up with the help of #Nate. Video via Anita & Tori Horn. pic.twitter.com/QrnKESuyTE

@VickiGrafWSOC9 my fiancé took this video on his way home from work. This was a touch down in Casar, NC #HurricaneNate #tornado pic.twitter.com/zvMSD6EzgS

One report came in from Burke County at 21:45 UTC where outbuildings were damaged along Woodlawn Drive from a likely tornado near 1 WSW Connelly Springs.

Six reports came in from Caldwell County. The first at 21:55 UTC near 5 SE Lenoir where a tractor-trailer overturned along Highway 321 at the Caldwell Community College and Technical Institute.

A tornado on the ground was reported by Hudson Fire Department at Redwood Park around 22:00 UTC. Four reports came in from 22:00 to 22:00 UTC from 4 SE Lenoir where a tree fell down on a car on Highway 321 at Mount Herman Road. Five homes were damaged around Fairwood Drive and Mount Herman Road, a steeple was blown off church at Starcross Road and Ellerwood Road. Numerous trees were downed.

Doppler radar and satellite imagery indicate that the precipitation shield associated with Nate is on the northern and eastern side of the circulation as it continues to become more asymmetric. The highest rainfall rates are located in the Southern Appalachians and into Western Mid-Atlantic. Farther north across the Ohio Valley, tropical moisture is interacting with a frontal boundary, leading to moderate to heavy rainfall.

Nate is expected to continue tracking northeastward, moving into eastern portions of the Ohio Valley states by Monday morning (local time) and into northeast Monday evening as a post-tropical cyclone.