A major hailstorm hit the city of Teruel and surrounding region in Aragon, eastern Spain on Friday, September 22, 2017. The event lasted up to 30 minutes, paralyzing traffic on some of the most important city roads.

The hailstorm which began at about 21:00 CET (19:00 UTC) was very intense for about 15 minutes and was followed by another 15 minutes of heavy rain.

According to Meteo Aragón, River Turia suddenly reached flood stage and overflowed, flooding the low-lying areas and causing injuries to four people who had to be treated for hypothermia.

The incident occurred on the Moratilla bridge where a driver was trapped in his vehicle when he was caught by rushing water in a passage under the train line. The water there reached a height of 1.8 m (5.9 feet), leaving the man trapped on the roof of his car. 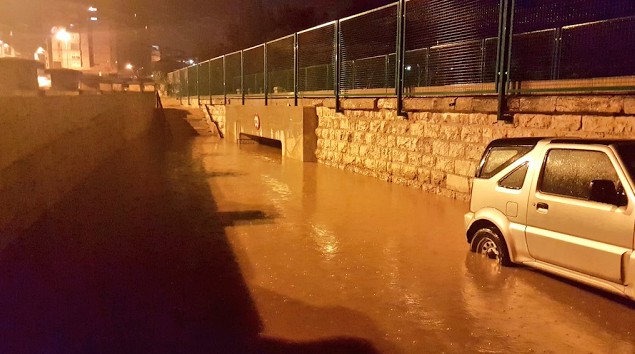 Three firefighters went to rescue him and had to swim in icy cold water for half an hour to help him. All of them had to be transported to a hospital and are now recovering.