Category 4 Hurricane "Maria" made landfall in Puerto Rico at 10:15 UTC (06:15 AST) on Wednesday, September 20, 2017 with maximum sustained winds of 248 km/h (155 mph). This was the first Category 4 hurricane landfall in Puerto Rico since Hurricane "San Ciprian" of 1932. Before it hit Puerto Rico, Maria's eye raged across Dominica for more than 2 hours on September 19, causing widespread devastation. With winds of 260 km/h (160 mph), it was the strongest hurricane to hit the country ever.

On the forecast track, the center of Maria will move away from the northwestern coast of Puerto Rico this afternoon. The center will then pass offshore of the northeastern coast of the Dominican Republic tonight and Thursday, September 21 and then move near the Turks and Caicos Islands and southeastern Bahamas Thursday night and Friday, September 22.

"Buildings that meet the island's newer construction codes, established around 2011, should be able to weather the winds, but wooden homes in flood-prone areas have no chance," Puerto Rico's governor, Ricardo Rosselló, said before the storm hit.

Maria made landfall near the coastal town of Yabucoa at 10:15 UTC (06:15 AST) as the strongest hurricane to make landfall in Puerto Rico since Category 5 Hurricane "San Felipe" of 1928, delivering huge amounts of rain and powerful winds that downed trees, ripped roofs and walls off of buildings and soon knocked out power to the entire island.

Puerto Rico's emergency management director, Abner Gomez, said at a midday press conference that the information they have received so far is not encouraging. "It's a system that has destroyed everything it has had in its path," he said.

Information received by afternoon (AST), the intense gusts had become less frequent and the lashing rains eased, giving residents their first glimpse of the storm's wake.

In the community of Juan Matos, located in Cataño, west of San Juan, 80 percent of the structures were destroyed, the mayor of Cataño told El Nuevo Dia. "The area is completely flooded. Water got into the houses. The houses have no roof. Most of them are made of wood and zinc, and electric poles fell on them."

In the capital of San Juan, buildings shook and glass windows shattered from the force of the storm. Residents of some high-rise apartments sought refuge in bathrooms and first-floor lobbies, but even those who sought out safe ground found themselves vulnerable, The Washington Post reported.

At 18:00 UTC (14:00 AST) on September 20, the center of Hurricane "Maria" was located just offshore of the northwestern coast of Puerto Rico; 29 km (15 miles) W of Arecibo, Puerto Rico and 155 km (95 miles) E of Punta Cana, Dominican Republic. Its maximum sustained winds are 185 km/h (115 mph), making it a Category 3 hurricane on the Saffir-Simpson wind scale. Maria's minimum central pressure based on the aircraft data is 961 hPa.

Maria is moving toward the northwest near 19 km/h (12 mph), and this general motion with a gradual decrease in forward speed is expected through early Friday.

On the forecast track, the center of Maria will move away from the northwestern coast of Puerto Rico this afternoon. The center will then pass offshore of the northeastern coast of the Dominican Republic tonight and Thursday and then move near the Turks and Caicos Islands and southeastern Bahamas Thursday night and Friday.

Little change in strength is forecast during the next 48 hours, and Maria is expected to remain a dangerous major hurricane through Friday. 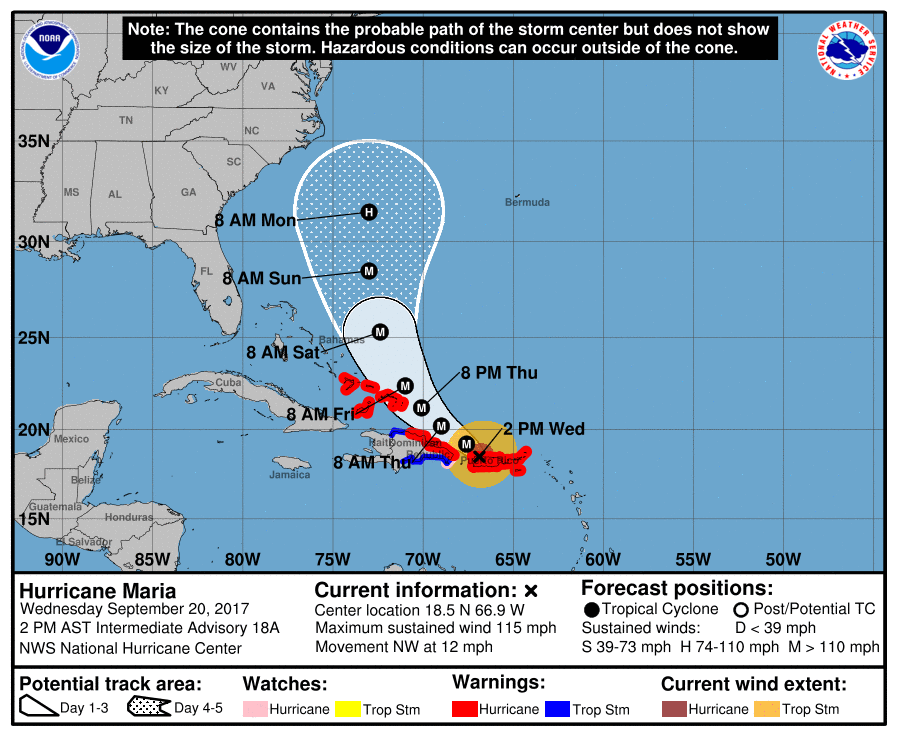 A Hurricane Warning means that hurricane conditions are expected somewhere within the warning area. Preparations to protect life and property should be rushed to completion. 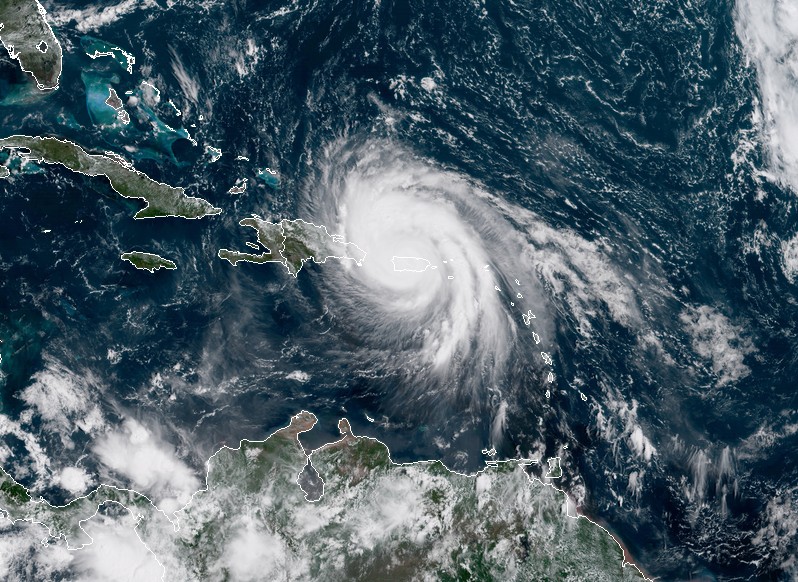 The water is expected to reach the following heights above ground if the peak surge occurs at the time of high tide:

The deepest water will occur along the immediate coast near and to the north and east of the landfall location, where the surge will be accompanied by large and destructive waves. Surge-related flooding depends on the relative timing of the surge and the tidal cycle, and can vary greatly over short distances.

A dangerous storm surge accompanied by large and destructive waves will raise water levels by as much as 1.2 to 1.8 m (4 to 6 feet) above normal tide levels in the hurricane warning area in the Dominican Republic, and 0.3 to 0.91 m (1 to 3 feet) elsewhere along the northern coasts of the Dominican Republic and Haiti.

A dangerous storm surge accompanied by large and destructive waves will raise water levels by as much as 3 to 4.5 m (10 to 15 feet) above normal tide levels in the hurricane warning area near and to the north of the center of Maria for both the Southeastern Bahamas and the Turks and Caicos Islands.

Maria is expected to produce the following rainfall totals through Friday:

Several tornadoes are possible over Puerto Rico and the U.S. Virgin Islands today

Swells generated by Maria are affecting the Leeward Islands, Puerto Rico, and the Virgin Islands. These swells will begin affecting the northern coast of Hispaniola, the Turks and Caicos Islands, and the Southeastern Bahamas during the next day or two.