A relatively large sinkhole has opened up on the edge of Wickiup Reservoir, Oregon's second-largest reservoir, and is slowly draining the water in. The area has been roped off and officials are warning visitors to keep away as the ground is unstable and immediate area around the hole could possibly collapse as well. The most likely cause is a collapsed lava tube. Such features are not uncommon for the area, given its volcanic geology, but it is the first of its kind in recent years.

According to the Bureau of Reclamation spokesman, Dave Walsh, the hole was discovered over the weekend. It is located about 76 m (250 feet) north of the Reservoir Campground boat launch, west of La Pine. Its diameter is roughly 3 – 3.6 m (10 to 12 feet) but the hole appears to be growing.

"A geologist who examined it on behalf of the bureau on Monday, June 26, 2017, estimated the water was flowing down the hole to parts unknown at around 3 400 liters (900 gallons) a minute," Walsh said.

There is a possibility that the cause of the sinkhole is a collapsed lava tube, but geologists are still unable to confirm it. This is, however, the most likely explanation, given the region's volcanic geology, Scott Hammers of The Bulletin said. 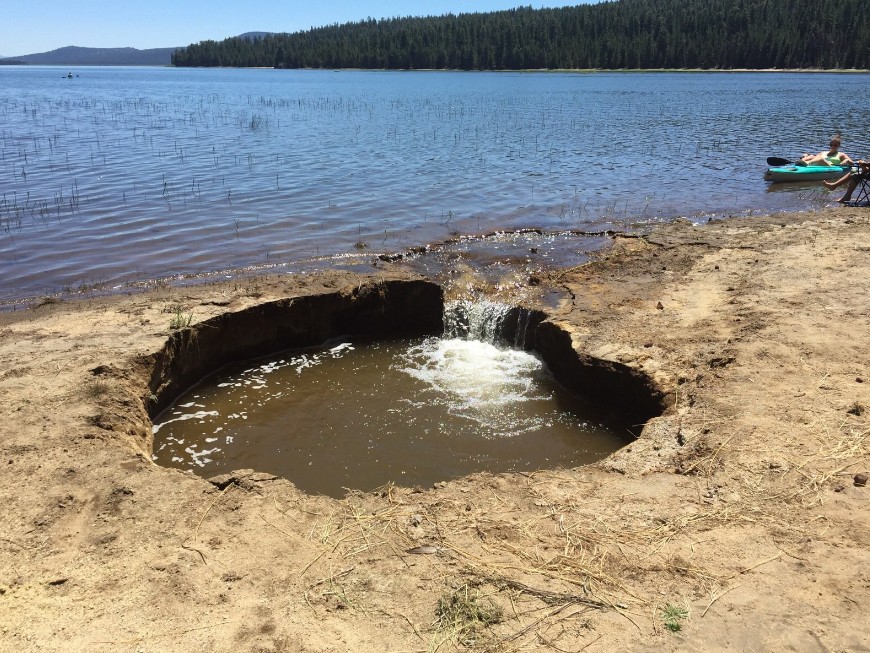 Deschutes National Forest spokesman, Kassidy Kern, said there could be unknown lava tubes a short distance beneath the surface all over Central Oregon. The best known emanate from the now-extinct Newberry volcano. Its last known eruption took place in the year 690 +/- 100 years.

"Once the inspection is complete, the Bureau of Reclamation and the North Unit Irrigation District will work together to create a plan on how to fill it to prevent future leakage," Walsh said.

The campground and boat launch will currently remain open to the public, but this might change in the future.

Because of the hole’s location and size, it is not expected to drain any significant amount of water from the reservoir, experts say.

Newberry volcano, situated east of the Cascade Range, is one of the largest volcanoes in the conterminous United States, covering an area of about 1 600 km2 (617 mi2). This low-angle basaltic to basaltic-andesite shield volcano is dotted with more than 400 cinder cones. Newberry has also produced major silicic eruptions associated with the formation of a 6 x 8 km (3.7 x 5 miles) wide summit caldera containing two caldera lakes.

Six major eruptive episodes from the early Holocene to about 1300 years ago have included both the eruption of basaltic lava flows from flank vents and the explosive ejection of rhyolitic pumice and pyroclastic flows and the extrusion of obsidian flows within the caldera.