Japan's famous Nishinoshima volcano, which gave birth to a new island at the end of 2013, is erupting again and officials say it is comparable to powerful eruptive episode observed in 2014 and 2015 when the island's surface area expanded at a remarkable rate.

The renewed activity was first spotted by Japanese Coast Guard at 05:25 UTC on April 20, 2017, prompting authorities to issue an alert to vessels passing nearby. After that, NASA's Earth Observatory searched their archives and found that satellite images acquired on April 19 showed an area of hot lava in the crater. According to the Tokyo VAAC, the volcanic ash was reaching 2.4 km (8 000 feet) by 08:00 UTC that day. At the time, the plume was not visible in satellite imagery and the Aviation Color Code was not raised.

Based on analysis of gases emanating from the volcano, the Japan Meteorological Agency's Meteorological Research Institute (JMA / MRI) believes there is a steady supply of magma and the eruption is likely to continue for some time.

As reported recently by the Mainichi, the JMA observation vessel Keifu Maru took the readings from May 25 to 27 and recorded Strombolian eruptions about once every 46 seconds. The JMA also observed Vulcanian eruptions about once an hour, scattering ash and other ejecta around the area. The volcano is spewing out about 500 metric tons of sulfur dioxide per day, indicating a high level of activity not seen on Nishinoshima since October 2015.

Volcanic cloud produced at 08:22 UTC today reached an altitude of 3 km (10 000 feet) above sea level and was drifting to the northeast, the Tokyo VAAC said. 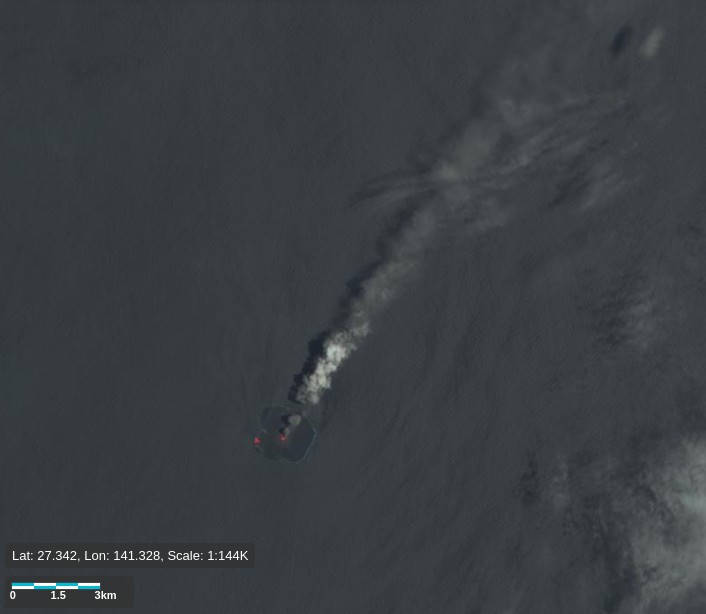 The last eruptive phase of this volcano ended on November 17, 2015.