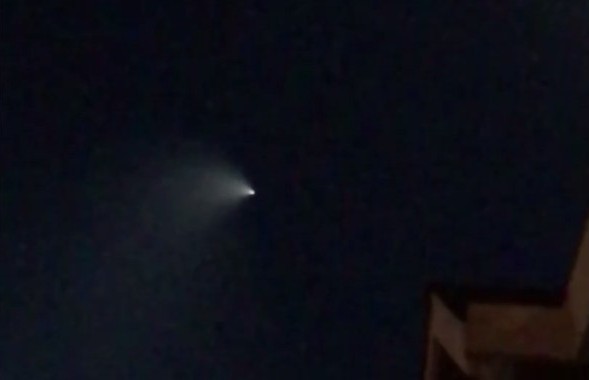 A bright light was seen across the sky over California early Tuesday morning, February 14, 2017, and later identified as a Navy missile test. The object appeared in the sky for at least 45 seconds. Many said it changed trajectories.

The event was described as a bright light with a large, glowing tail that slowly moved across the early morning sky.

Navy Strategic Systems Programs spokesman John Daniels said an Ohio-class submarine off the coast of California, south of the Bay Area, launched two Trident II D-5 missiles, one at 03:30 and another at 06:20 local time.

It was the latter one that was seen by many people who shared images and speculated what it might be.

“It was part of a routine missile test that has been planned for a couple of years,” Daniels said. “This was not in response to any ongoing world activities.”

Daniels said Bay Area residents likely saw stage one, which lasts about a minute, and possibly part of stage two. By stage three, the missile is well-beyond what the naked eye can see, he said, as quoted by East Bay Times.

Possible rocket launch this morning? One of our forecasters took these pics look S from #Monterey of what looks like vapor trails. #cawx pic.twitter.com/WI9Hlg21sX