According to media reports, a river burst its banks on November 7 and flooded 5 sub-districts in Aceh Jaya, Aceh, affecting more than 7 300 people. Flood level in residential areas was around 80 – 150 cm (2.6 – 5 feet).

Extensive flooding was reported on November 9 in Badung, the capital city of West Java province, where floodwaters swept away cars and motorcycles. Four sub-districts were submerged. By November 12, 3 356 houses and 20 bridges have been damaged. 1 498 houses suffered serious damage.

As many as 4 369 people have been forced to evacuate. "They are being evacuated to safe shelters," Tangerang Disaster Mitigation Agency (BPBD) official Kamaludin told Tempo on Monday, November 14, 2016.

Kamaludin said that as of Monday noon (local time), the evacuation process of flood victims continues. 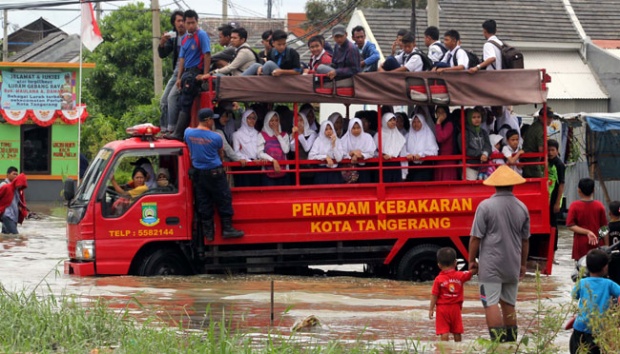 The agency has been moving the people trapped by the flood to shelters and those who were going to work and school as flood has cut off the access road to the area.

Sutopo Purwo Nugroho, the spokesperson for BNPB, said some 41 million people in Indonesia are exposed to medium-high landslide danger.

Nugroho warned the threat of flooding will increase in the coming months, with the peak expected in January 2017.