A strong and shallow earthquake registered by the USGS as M7.2 hit southeast of the Loyalty Islands, New Caledonia at 01:24 UTC on August 12, 2016. The agency is reporting a depth of 10 km (6.2 miles). Geoscience Australia is reporting Mwp7.3 at a depth of 0 km.

There are no people living within 100 km (62 miles). A local tsunami warning has been issued by the Pacific Tsunami Warning Center and the threat has now passed. 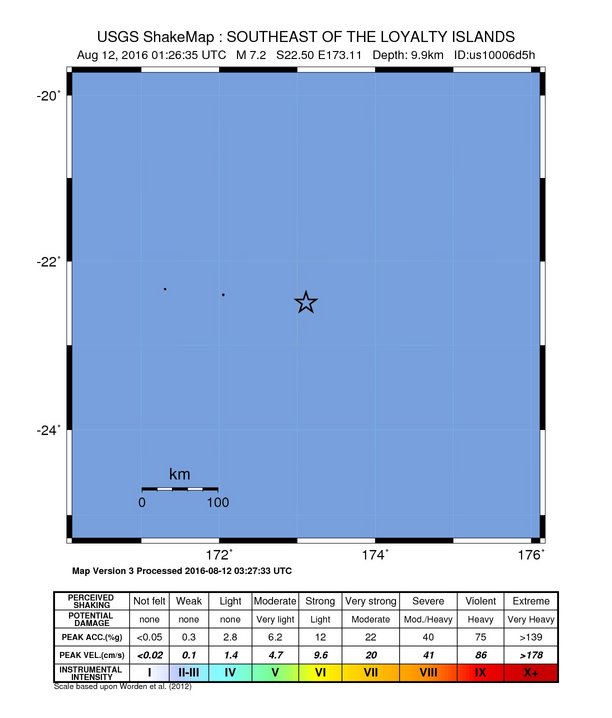 Within the next 2 hours, USGS registered 6 more earthquakes in this region: 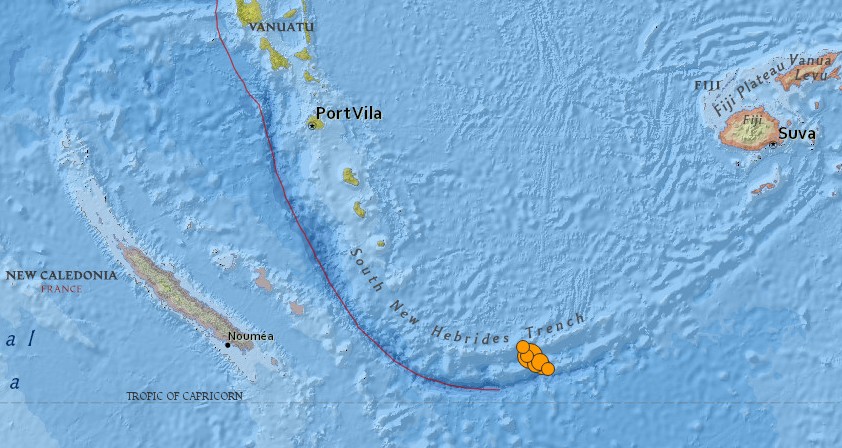 Since 1900 there have been 15 M7.5+ earthquakes recorded near New Zealand. Nine of these, and the four largest occurred along or near the Macquarie Ridge, including the 1989 M8.2 event on the ridge itself, and the 2004 M8.1 event 200 km to the west of the plate boundary, reflecting intraplate deformation. The largest recorded earthquake in New Zealand itself was the 1931 M7.8 Hawke's Bay earthquake, which killed 256 people. The last M7.5+ earthquake along the Alpine Fault was 170 years ago; studies of the faults' strain accumulation suggest that similar events are likely to occur again.

North of New Zealand, the Australia-Pacific boundary stretches east of Tonga and Fiji to 250 km south of Samoa. For 2,200 km the trench is approximately linear and includes two segments where old (>120 Myr) Pacific oceanic lithosphere rapidly subducts westward (Kermadec and Tonga). At the northern end of the Tonga trench, the boundary curves sharply westward and changes along a 700 km-long segment from trench-normal subduction, to oblique subduction, to a left lateral transform-like structure.

Large earthquakes are common along the North New Hebrides trench and have mechanisms associated with subduction tectonics, though occasional strike slip earthquakes occur near the subduction of the D'Entrecasteaux ridge. Within the subduction zone, 34 M7.5+ earthquakes have been recorded since 1900. On October 7, 2009, a large interplate thrust fault earthquake (M7.6) in the northern North New Hebrides subduction zone was followed 15 minutes later by an even larger interplate event (M7.8) 60 km to the north. It is likely that the first event triggered the second of the so-called earthquake "doublet". (USGS) More information on regional seismicity and tectonics