A huge magma chamber may slowly be growing beneath Matata town, southeast of Auckland in New Zealand, according to a new study performed by GNS Science. The discovery of a growing volcano may help to explain a recently observed swarm of earthquakes. Good news is, the scientists don't expect the volcano to erupt anytime soon.

A group of geophysicists at GNS Science performed the research using the GPS data and satellite images. They studied ground motions in the Taupo Volcanic Zone (TVZ) from the radar data coming in from various satellites, including ESA's Envisat. 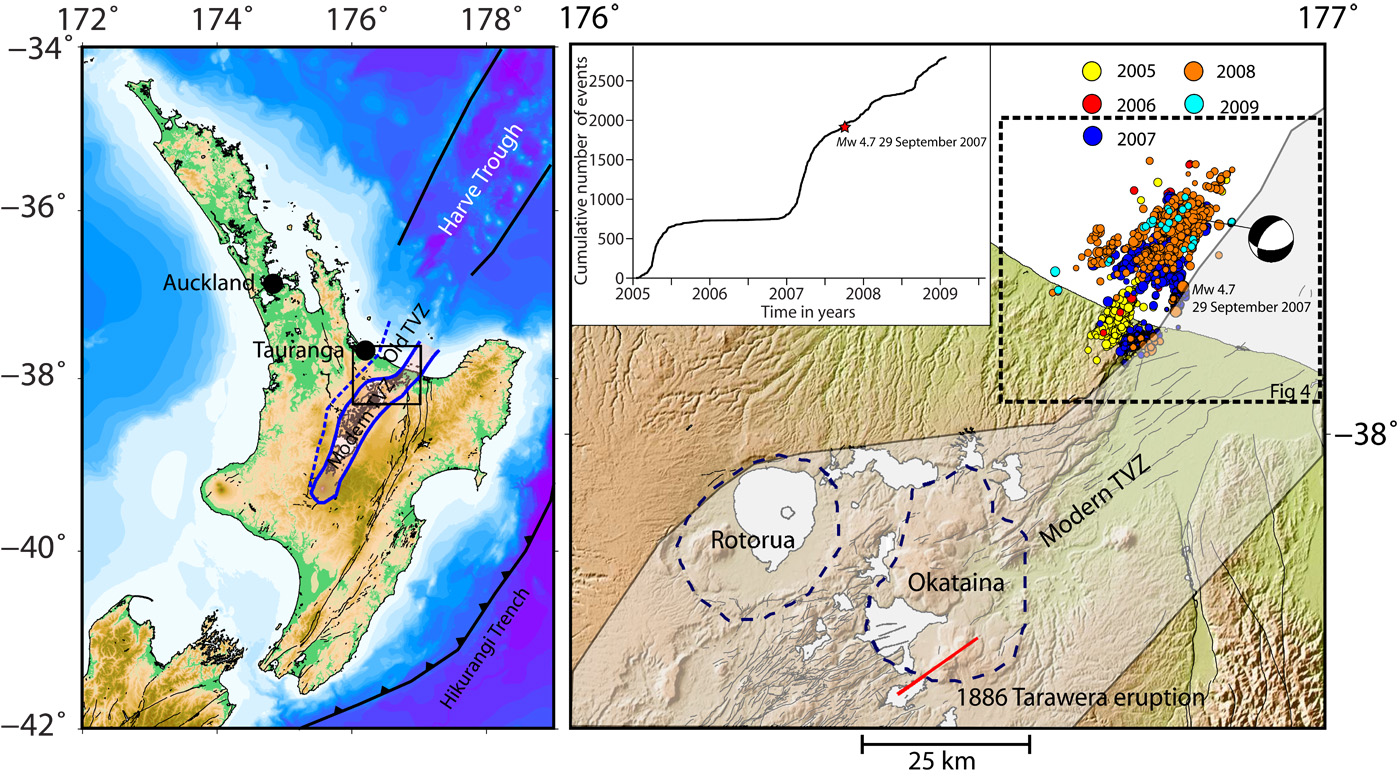 Location maps showing the North Island of New Zealand and the study area at the northern end of the Taupo Volcanic Zone. (Left) Color-shaded relief map of the North Island of New Zealand indicating the study area (black box) and boundaries of the currently active TVZ [<300 thousand years ago (ka); solid blue line] and old TVZ [>300 ka; dashed blue line). (Right) Color-shaded relief of the study area highlighting the location of the modern TVZ (gray transparency), Okataina and Rotorua Caldera boundaries (blue dashed lines), and the relocated 2005–2009 Matata earthquake swarm, which are color-coded by year. The dashed box indicates the region shown in Fig. 4. The moment tensor (MT) solution for the largest event is shown by the beach ball. The inset in the top left shows the cumulative number of earthquakes during the sequence. Image credit: Hamling et al.,2016

The discovery came as a big surprise to the scientists, AP reports, as no active volcanoes have been observed near Matata for al least 400 000 years. In the period between 2004 and 2011 the area experienced a quick uplift, and this event has probably induced the recently observed swarm of earthquakes.

The magma chamber is located about 10 km (6 miles) beneath the surface, and this should be deep enough to prevent the volcano reaching the surface anytime soon. The volcano may form over the next hundred or thousand years, or the existing magma may simply cool and harden.

The scientists hope the future research would enable them to develop a warning system for the earthquakes in the region, likely induced when the magma stresses and breaks the surrounding rocks.