Jason-3, a US – European oceanography satellite launched just over a month ago, has produced its first complete science map of global sea surface height, capturing the current signal of the 2015/16 El Niño.

The map was generated from the first 10 days of data collected once the satellite reached its operational orbit of 1 336 km (830 miles) on February 12. It shows that after peaking in January high sea levels in the eastern Pacific are now beginning to shrink. 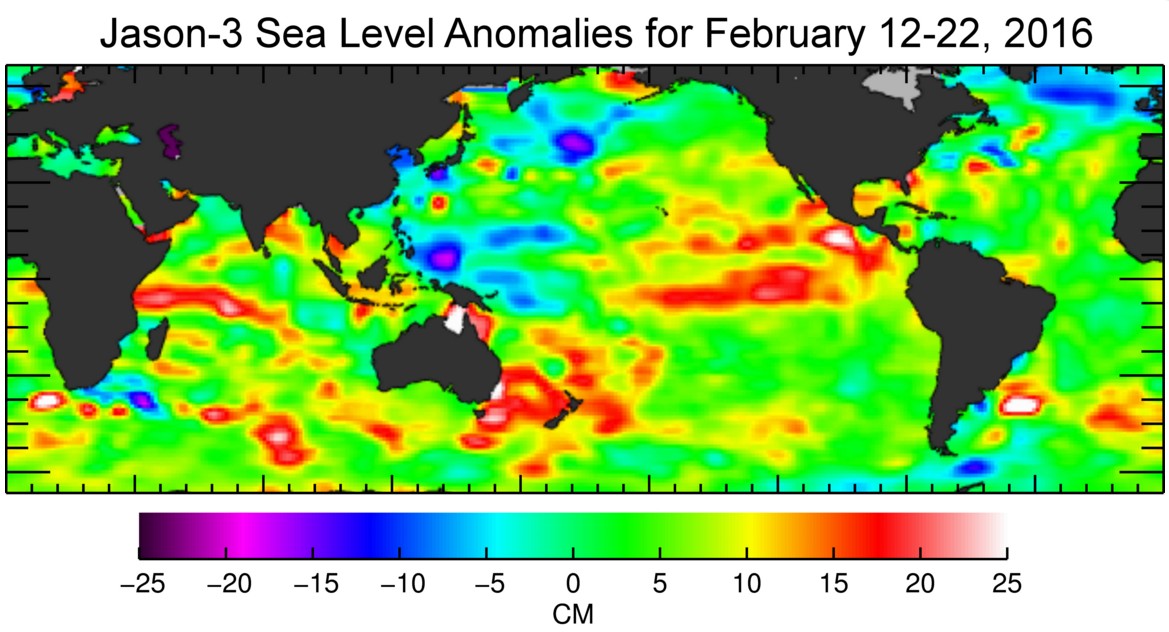 Jason-3's nominal three-year mission will continue nearly a quarter-century record of monitoring changes in global sea level. These measurements of ocean surface topography are used by scientists to help calculate the speed and direction of ocean surface currents and to gauge the distribution of solar energy stored in the ocean.

Information from the satellite will be used to monitor climate change and track phenomena like El Niño. It will also enable more accurate weather, ocean and climate forecasts, including helping global weather and environmental agencies more accurately forecast the strength of tropical cyclones.

Jason-3 data will also be used for other scientific, commercial and operational applications, including monitoring of deep-ocean waves; forecasts of surface waves for offshore operators; forecasts of currents for commercial shipping and ship routing; coastal forecasts to respond to environmental challenges like oil spills and harmful algal blooms; coastal modeling crucial for marine mammal and coral reef research. 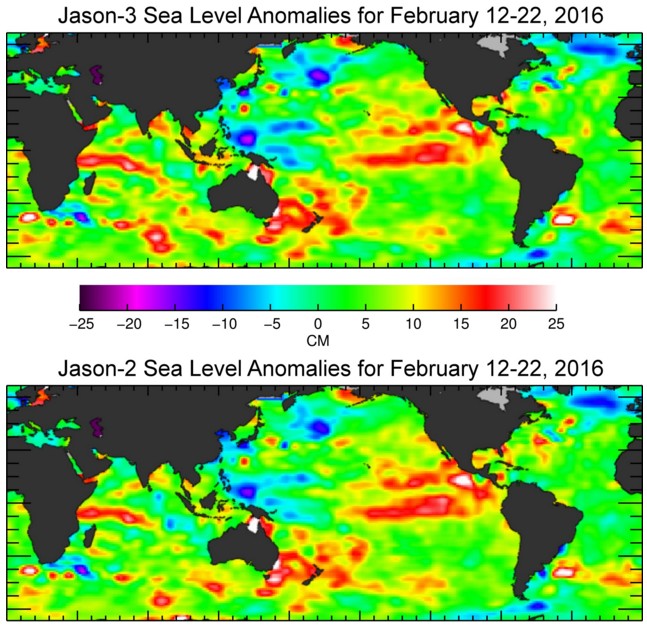 Over the past several weeks, mission controllers activated and checked out Jason-3’s systems, instruments and ground segment, all of which are functioning properly. They also maneuvered Jason-3 into its operational orbit, where it now flies in formation with Jason-2 in the same orbit, approximately 80 seconds apart. The two satellites will make nearly simultaneous measurements over the mission’s six-month checkout phase to allow scientists to precisely calibrate Jason-3’s instruments.

“Jason-3 is continuing the climate data record of sea level change as measured by altimeters going back to 1992. The Jason missions have become the reference for all satellite altimeters. Until the summer, Jason-2 and Jason-3 overfly the same spot of the ocean just 80 seconds apart. This allows us to cross-calibrate those missions with extreme precision of less than one millimeter of sea level, thus ensuring a consistent time series," said Remko Scharroo, Remote Sensing Scientist at EUMETSAT.

“With the Sentinel-3 just launched as well, one of our first efforts during the commissioning of the Sentinel-3 SRAL altimeter will be to calibrate it against the Jason-2 and -3 missions. Taken together, these missions will help us not only to monitor the large-scale changes of the ocean but also those at smaller scales. The myriad of benefits of Jason-3 include near real-time applications such as hurricane forecasting, monitoring of El Niño, and modeling of ocean currents. And also societal benefits for the long-term, such as the monitoring of sea level rise.”

Data from Jason-3’s predecessor missions show that mean sea level has been rising by about 3 mm (0.12 inches) a year since 1993.

Data access in Europe will be secured via the multi-mission infrastructure available at EUMETSAT and CNES, including EUMETSAT’s EUMETCast real-time data dissemination system, Earth Observation Portal and archives, as well as the CNES/AVISO data system.