According to new research, data being collected from Jupiter, Saturn and Saturn’s largest moon, Titan, can provide the new information about the Earth’s past and future atmospheric conditions. A team of scientist will analyze the vast amount of data collected by the Cassini spacecraft to try to obtain a broader perspective on how the climate changes on Earth.

The scientists from NASA's Jet Propulsion Laboratory and the University of Wisconsin-Madison will analyze data collected by instruments on board the Cassini spacecraft, which is currently on a mission to explore Saturn’s systems, and is set to finish by late 2017. The research is led by Liming Li, an assistant professor of physics at the UH College of Natural Sciences and Mathematics. His research team will have the opportunity to study Cassini data and establish its relationship to the climate of our own planet.

The Cassini-Huygens unmanned spacecraft launched aboard a rocket in 1997. It collected data from Jupiter during its passage in 2000 and 2001 and continued towards Saturn. The spacecraft, equipped with the Huygens lander, reached Saturn in 2004 and landed on Titan in January 2005.

"The weather is so different among the various planets. By studying the weather systems on planets, we can get a wide perspective for how the climate changes on Earth," he added.

Earth and Saturn have approximately the same rotational angle which means the changes of season follow similar patterns. The information about the seasonal change is highly significant, as it provides a chance of observing the climate change in a short time span. Measurements conducted by Cassini will range from 2004 to 2017, and will, as such, cover half a Saturn year. This will provide the data from two to three seasons. 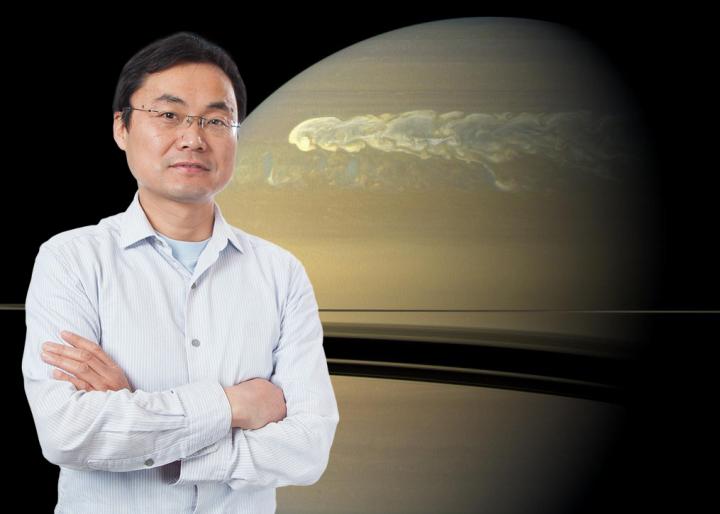 "Saturn’s atmospheric systems differ with the seasons. For example, in spring and summer, there are giant storms. Through Cassini, we observed probably the biggest storm in our solar system. It was 100 000 kilometers wide, which is more than 62 000 miles. That is much bigger than a storm on Earth and, actually, bigger than Earth."

Jupiter, Saturn, and Titan's energy budget will also be analyzed. It will show how much energy is received from the Sun, and what fraction of it is emitted. Energy budget influences the planetary climate and evolution, and, therefore, it's important to know whether it is balanced or not.

According to Li, on Earth, the incoming energy is about the same as the outgoing energy. "That means the temperature doesn’t change dramatically, even with greenhouse effects. Saturn and Jupiter are emitting more energy than absorbed, so they are generating some type of internal heat. Earth and Titan are similar, with no significant internal heat," Li said.

The research group will study the data gathered from three of the Cassini's instruments. The Composite Infrared Spectrometer provides information about the chemical component of the planet’s spectrum from which the scientist will be able to determine the temperature. Cassini's Imaging Science Subsystem contains two cameras, which can provide a narrow-angle, high-resolution view of a fixed area, as well as a wide-angle, low-resolution image of larger areas. By using the wide-angle capabilities, the scientists can identify areas of interest which can then be studied further by using the higher resolution images. The Visible and Infrared Mapping Spectrometer includes a camera and a spectrometer, providing real-time temperature and visual data at the same time.