An outbreak of dangerous tornadoes was reported across Alabama, Florida, Louisiana, and Mississippi during February 23, 2016. 22 tornadoes were reported, and 5 were confirmed by the National Weather Service (NWS) so far. Extreme weather conditions claimed, at least, three lives, and 30 people were injured.

The Prairieville and Paincourtville communities in Lousiana and the greater Pensacola area in Florida suffered the hardest strike.

Governor John Bel Edwards declared a state of emergency for seven parishes in Louisiana, including St. Johns, Assumption and Washington: "I ask all Louisianans to pray for the victims of the terrible storms that touched down in Louisiana today and especially at the Sugar Hill RV Park in Convent. We will do all that we can to help restore the families, businesses, and communities destroyed by this tragedy."

No one was injured, but trees were damaged as a #tornado crossed I-10 in Louisiana. See the raw video. #LAwx pic.twitter.com/8iGK4KjZiR

In south Louisiana, about 20 000 homes lost their power supplies, according to Entergy, and local district schools canceled classes across the affected areas.

Tornadoes have reportedly torn off the roofs and peeled back the facades from the buildings in the Baton Rouge area. A Gold's Gym and a few other buildings in Prairieville suffered moderate damage, while several houses had their roofs completely torn off in Livingston.

A tornado touch down, confirmed by a radar, was observed near Paincourtville in Assumption Parish, after which the tornado moved eastwards. Extensive damage was afflicted to businesses in Paincourtville, a water tower was devastated, semi trucks tipped over and numerous homes were completely destroyed. Severe damage was also reported in Belle Rose.

A possible tornado was reported near the Louis Armstrong International Airport in Kenner on the morning of February 23 (local time), and several nearby structures sustained damage. A few cars parked near the airport also suffered damage, and the wall behind the New Mount Bethel Baptist Church fell down. Several homes and downed power lines have been reported between Franklin and Baldwin St. Mary Parish while other possible tornadoes were observed north of Lake Pontchartrain and west of the city in St. Charles and Ascension parishes.

The southern Marion County and Bogalusa area in Pearl River County in Mississippi reported two tornadoes, confirmed by radars on the early evening of February 23 (local time). A state of emergency was issued throughout the affected areas. Schools and universities were closed across the districts ahead of the storm.

A tornado touch-down was observed in the Escambia County, Florida. The twister was confirmed by the NWS. Several cars and a tractor trailer were flipped over on the Escambia Bay Bridge, 24 units of the Mooring Apartment Complex in Pensacola were devastated, and 6 sustained a minor degree of damage.

A catastrophic gas leak was also reported in the region, according to the Escambia County Fire and Rescue. The search and rescue operations for people possibly trapped by debris are ongoing in the county. 10 000 households reported power loss in Pensacola.

A state of emergency was declared in Alabama by Governor Robert Bentley, on the evening of February 23 (local time) in the wake of the storm. About 10 000 homes reported power outages in Del Rio, Texas. A school bus flipped along Highway 288, and the bus driver sustained minor injuries. Luckily, no students were on the bus at the time. An NWS-confirmed EF0 tornado was reported on the early morning on February 23 (local time) in Wharton County.

More tornadoes are expected as the storm will continue to spread across the Gulf Coast to the Southeast and mid-Atlantic on February 24. NOAA's NWS issued a tornado watch for southwestern Georgia and parts of the Florida panhandle, including Albany, Georgia and Tallahassee. The watch will be in effect until 3 am CST (4 am EST/9:00 UTC). The watch for parts of central Georgia, including near and southeast of Macon will be in effect until 6 am EST (11:00 UTC).

Dr. Gref Forbes, the expert of the Weather Channel said the Tornado Conditions Index for February 24 is 6 (on a 1 to 10 scale) for portions of eastern and central North Carolina and eastern Virginia, meaning there is a 60% likelihood of a twister within an 80-km (50-mile) radius of any location within the area. EF2 or higher rank tornadoes are possible in eastern North Carolina. 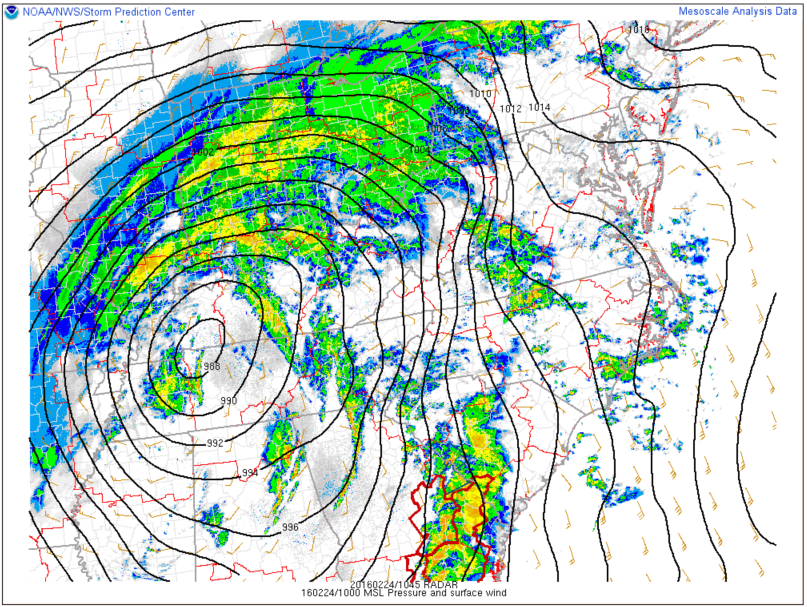 Intense thunderstorms are expected across Georgia and North Florida to the Carolinas, eastern Virginia and parts of mid-Atlantic. Tornadoes are possible within the squall line and individual thunderstorms ahead to the line. Jacksonville, Florida, Raleigh, North Carolina, Richmond, Virginia, and Savannah, Georgia should expect extreme weather conditions.

Heavy rainfall and severe thunderstorms are forecast from the Tennessee Valley and Ohio Valley to the East Coast. Flooding is possible, and rainstorms might spread into the Northeast. Flood watches have been issued from Georgia to Maryland, as up to 50.8 mm (2 inches), and locally higher precipitation amounts are expected.