Winter Storm "Jonas" is expected to hit parts of the US East Coast on January 22, 2016. The storm will continue throughout the coming weekend, bringing heavy snowfall and major ice accumulations accompanied with strong winds. Coastal flooding along some parts of the Atlantic coast is also possible, National Weather Service (NWS) warned.

A blizzard watch for the afternoon of January 22 through late night on January 23 was already issued by the NWS for Washington, D.C. and Baltimore. This is the first watch of this kind ever issued in advance of the coming storm. Strong winds could cause power outages across the affected areas.

First winter storm watches were issued for portions of Kentucky, West Virginia, and neighboring states on January 20. The majority of them will be in effect from the night of January 21 until January 23.

Although the approaching storm will most likely have a high impact, forecasters are still uncertain of its exact track and length.

Winter Storm "Jonas" will start with light snow across the central and northern Plains on January 21. Snow, sleet and freezing rain could occur from Oklahoma and Arkansas into Kentucky, the Appalachians and Piedmont of Virginia and North Carolina.

The Tennessee Valley will be affected by the snowstorm on January 22. It will then spread south of the New York City while the wind will start to intensify along the coast from the Carolinas to the Jersey Shore, and near the Chesapeake Bay during the night of the same day.

January 23 will see a heavy snowfall across the Appalachians and parts of the Mid-Atlantic which will then spread to southern New England. Rainfall is expected to turn into snow near the Mid-Atlantic coast, while strong, even damaging winds will affect the area from the Delmarva Peninsula to Cape Cod.

On the following day, the snowstorm is expected to ease along the Mid-Atlantic Seaboard but may still affect the coastal New England.

Meteorologists predict at least 30.5 cm (1 foot) of snow across the Appalachians from eastern Kentucky into a major part of West Virginia, Virginia apart from the southeast area, Maryland, D.C., northern Delaware and extreme northwest North Carolina. Over 50.8 cm (20 inches) of total snowfall is possible locally.

I-95 corridor northward through New York City and the Long Island will receive at least 15.2 cm (6 inches) of snow while areas situated along the northern edge of the weather system, from south-central and east-central Pennsylvania to southern New England could see more than 15.2 cm (6 inches) of snow. However, in this area, there is still a significant degree of forecast uncertainty present. 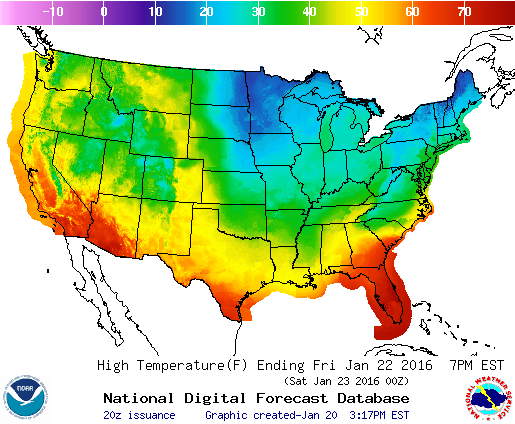 Strong to damaging winds are expected across Delmarva Peninsula, Chesapeake Bay, New Jersey, and Long Island on January 23. Wind gusts could rise to 96.5 km/h (60 mph) locally, which could lead to power outages, downed trees and limbs and structural damage. 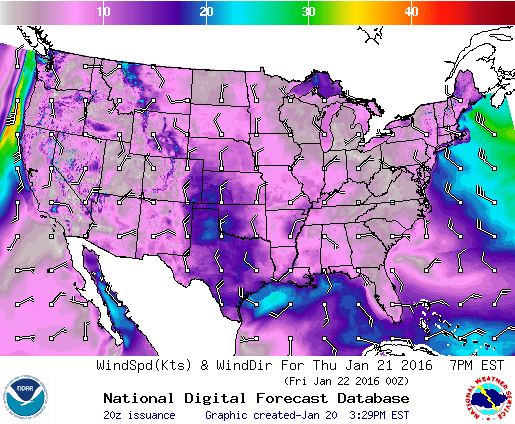 The impact of coastal flooding can still not be determined exactly. Tides will probably be high during the weekend due to a full moon, and this could aggravate the flooding. Areas of particular concern include Delaware, the western side of Chesapeake Bay, and the Jersey shore.

Major coastal flooding is possible across these areas during January 23, with potential beach erosion and even property damage. Moderate flooding is also possible in the west end of Long Island Sound, the south shore of Massachusetts, Cape Cod, Martha's Vineyard and Nantucket Island.