Heavy rainfalls triggered floods and landslides in portions of West and North Sumatra on November 29, 2015. More than 500 homes have been inundated and some reported severe damage, being completely buried by the landslides.

Severe rainstorms which have been affecting parts of Sumatra over the last 3 days have caused flooding and landslides, media reports. The extreme conditions have caused traffic delays and road cutoffs across the country, as a 150 m (490 feet) long stretch of an important highway connecting West Sumatra and Riau in Jorong Sopang, Limapuluh Kota regency was overflown by about a meter of water (3.3 feet). 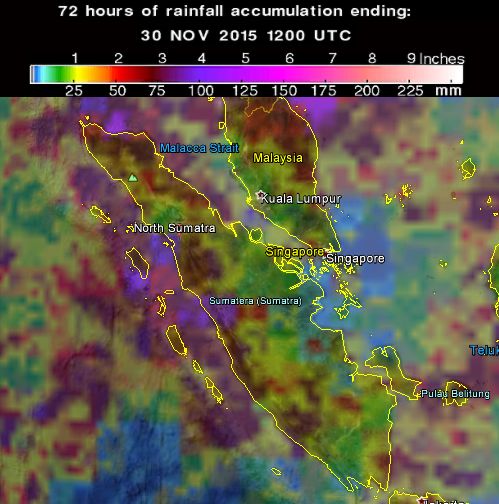 The floods across the country have been caused by the Batang Manggilang River which overflew its borders, according to the Limapuluh Kota Disaster Mitigation Agency (BPBD). The villages of Taram and Sarilamak in Harau district, Payakumbuh, Guguk, LAreh Sago Halaban and Kapur Sembilan were among the areas struck by flood conditons.

“Only large trucks were able to pass, resulting in other vehicles from Pekanbaru and Payakumbuh backing up 2 km (1.2 miles) for eight hours,” Nasriyanto, the lead of BPBD said.

Numerous locations suffered consequences of severe weather conditions, and at least 500 homes were left overflown as more than 50 cm (164 feet) of water inundated the area. 8 homes were hit by the landslides. Luckily, no victims have been reported so far and residents are currently being transferred to safer areas.

Several landslides have been reported across the region. One of them took place in Agam regency on the morning (local time) of November 29 where the road was buried in several places by the rocks. The trans-Sumatra highway to Medan in North Sumatra was completely cut off by a landslide which struck on the morning of November 28.

The severe landslide in Doulu village burried 4 houses and a motorcycle on November 28 causing the economic loss of millions of rupiah, according to the Karo regency administration of North Sumatra.

The landslide also buried several houses in the region.