Severe rainfalls over the last few weeks have inundated Brazil and Uruguay, media reported on October 20, 2015. More than 1 000 people have been left homeless in the city of Porto Alegre, Brazil, while 200 have been displaced in northern Uruguay. 3 people have been reported dead so far.

One of the violent storms lashed Porto Alegre in Rio Grande do Sul, Brazil on October 14, causing the Guaiba Lake to flood the city. 32 mm (1.3 inches) of rainfall was estimated to fall in 24 hours across the already wet grounds. Heavy rainfalls were affecting the regions over the previous few weeks, as well, as over 100 mm (3.9 inches) of rain was reported to fall between October 8 and 10. 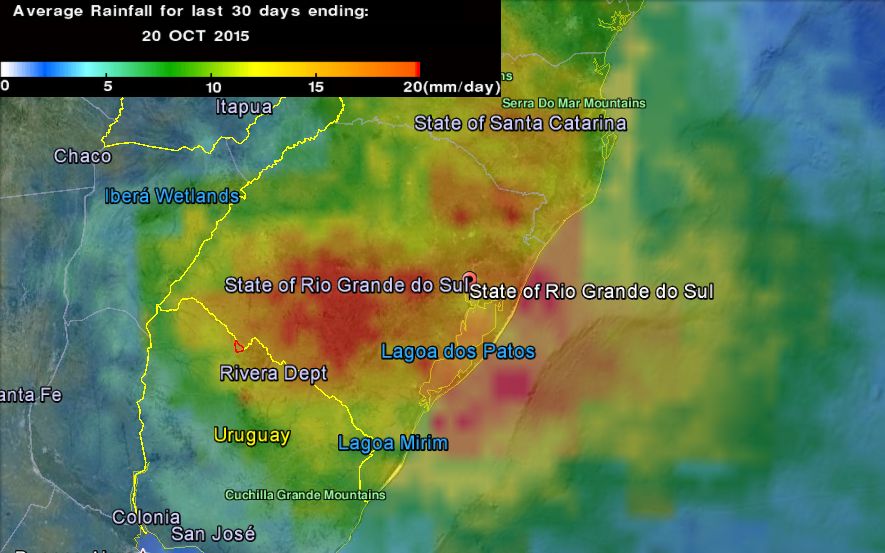 The floods have displaced at least 1 500 people in the city of Porto Alegre alone, while 12 000 were affected, as of October 18. Temporary shelters have been prepared across the affected areas, currently hosting about 600 people, while another 230 found their temporary accommodation in the Tesourinha Gym.

In total, 55 municipalities across Rio Grande do Sul have been affected by extreme weather conditions of last week, according to State Civil Defense.

At the same time, almost 200 people have been forced to leave their homes in the northern areas of Artigas, Salto, Rivera and Tacuarembo, Uruguay.

Torrential downpours caused the Uruguay River to overflow, according to the National Emergency System of Uruguay (SINAE). 183 people have been evacuated and traffic was suspended on four routes as flooding waters inundated areas on the border with Brazil.