Scientists from Moscow Institute of Physics and Technology (MIPT) and the RAS Geosphere Dynamics Institue have discovered that a large asteroid can deliver more water to the lunar surface than the cumulative fall of comets over a billion year period.

At the beginning of the space age, during the days of the Apollo program, scientists believed the Moon to be completely dry, MIPT writes.

At these earliest stages in satellite evolution, the absence of an atmosphere and the influence of solar radiation were thought enough to evaporate all volatile substances into space. However, in the 1990s, scientists obtained data from the Lunar Prospector probe that shook their confidence: the neutron current from the satellite surface was indicative of a larger fraction of hydrogen at the near-surface soil of some regions of the moon, which one could interpret as a sign of the presence of water."

In order to explain how water could be kept on the moon’s surface, scientists formulated a theory known as “cold traps.” The axis of the moon’s rotation is nearly vertical, which is why in the polar regions there are craters with floors that are never exposed to sunlight. When comets consisting mostly of water ice fall, evaporated water can gravitate into those “traps” and remain there indefinitely, as solar rays do not evaporate it.

In recent years, lunar missions (the Indian Chandrayan probe, the American LRO, data from the Cassini probe and Deep Impact) have brought scientists two pieces new information. The first is that there are indeed considerate quantities of water and hydroxyl groups in the near-surface soil on the moon. The LCROSS experiment, in which a probe purposely crashed onto the moon resulting in the release of a cloud of gas and dust that was later studied with the use of a spectrometer, directly confirmed the existence of water and other volatile substances. The second piece of new information came when the Russian LEND apparatus mounted on board LRO generated a map of water distribution on the moon’s surface. 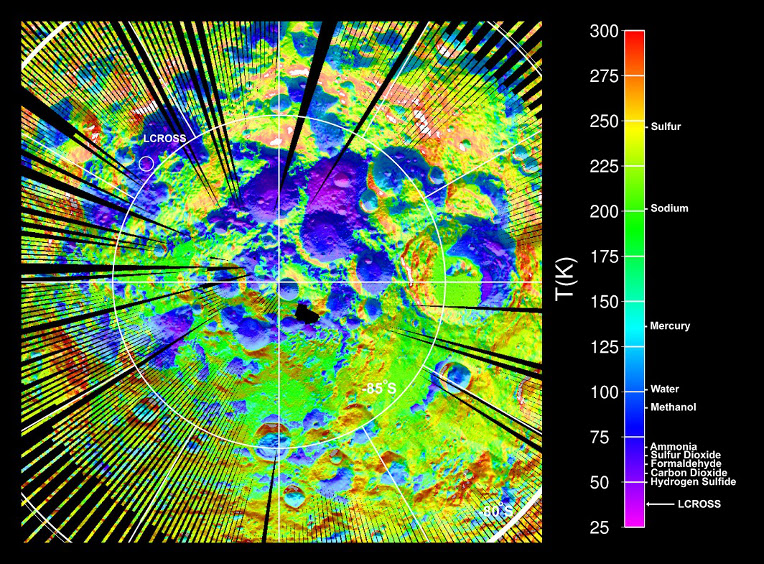 Temperature of the surface around the southern pole of the moon according to LRO data. Image credit: NASA

But this second piece has only partly proven their theory: the map of “cold traps” did not correspond to the map of water deposits. The scientists had to refine the theory, and the idea of “lunar congelation” was proposed. It allowed accepting that “survival” of water ice in the regions exposed to sunlight is possible under a soil blanket. It was also suggested that a substantial part of “water” seen by the probes is implanted solar wind: hydrogen atoms from solar wind react with oxygen atoms and form an unstable “dew” of water molecules and hydroxyl groups. Scientists left the possibility open that water could exist in a bound state, i.e. in hydrated minerals.

There was still the matter of determining how water had appeared on the moon and how much of it there could be. At the same time, another issue may prove to be of practical importance in the coming years: if manned stations are to be constructed on the moon in the nearest future, we should know what kind of resources we can count on, preferably before construction begins.

Vladimir Svettsov and Valery Shuvalov, who have been researching the fall of comets and asteroids, including the computerized simulation of the Tunguska catastrophe as well as the Chelyabinsk meteorite fall, decided to develop the most probable mechanism of water delivery to the moon and an approximate the “supply” volume. For this they used the SOVA algorithm, which they created themselves, for the computerized modelling of the fall of cosmic bodies onto the surface of the moon. Each body had its own velocity and its own angle of fall. In particular, at the output, the model demonstrated the distribution of maximum temperatures when the falling body’s mass heated up during impact as well as its dynamic.

The scientists first decided to check whether the comets are able to fulfill the role of main “water suppliers.” The typical velocity of an ice comet ranges from 20 to 50 km per second. The estimates suggested that such a high impact velocity causes from 95 to 99.9 percent of the water to evaporate into space beyond retrieve. There is a family of short-period comets whose velocity of fall is much lower – 8-10 km per second. Such short-period comets account for about 1.5 percent of lunar craters. Nevertheless, the simulation has shown that when these short-period comets do fall, almost all the water evaporates and less than 1 percent of it remains at the impact point.

“We came to the conclusion that only a very small amount of water that arrives with a comet stays on the moon, and from this decided to explore the possibility of an asteroid origin of lunar water,” Shuvalov says.

The scientists decided to take a closer look at asteroids and found that they consist of initially non-differentiated construction materials of the solar system and contain a rather considerable proportion of water. In particular, chondrite carbonaceous, the most common type of asteroids and meteorites, can contain up to 10 percent water.

However, water in chondrites is effectively protected: it is in a chemically bounded condition, and it is “blocked” in a crystal lattice of minerals. Water starts to seep out only when it is heated to 300-1200 degrees centigrade depending on the type of hydrous mineral. This means that it has the potential of remaining in the crater together with the asteroid.

The simulation has also revealed that when the velocity of fall is 14 km per second and the angle of fall is 45 degrees, about half of the asteroid’s mass will never even reach the fusing temperature and remains in a solid state. One-third of all asteroids that fall on the moon have a velocity of less than 14 km per second just before impact. When this happens, the major part of the fallen body remains in the crater: 30-40 percent is left after an oblique impact, and 60-70 percent after a vertical one.

“We’ve concluded that the fall of asteroids containing water could generate “deposits” of chemically bounded water inside some lunar craters,” Shuvalov says. “The fall of one two-kilometer size asteroid with a rather high proportion of hydrated minerals could bring to the moon more water than all of the comets that have fallen over billions of years,” he adds.

Calculations reveal that around 2 to 4.5 percent of lunar craters could contain considerable supplies of water in the form of hydrated minerals. They are stable enough to contain water even in areas exposed to the Sun.

“That is very important because the polar cold traps are not very convenient areas for the construction of lunar bases. There is a small amount of solar energy and it is difficult to organize radio communication and, lastly, there are dramatically low temperatures. The possibility of obtaining lunar water in regions exposed to the Sun could make the issue of satellite exploration much easier,” concluded the scientist.