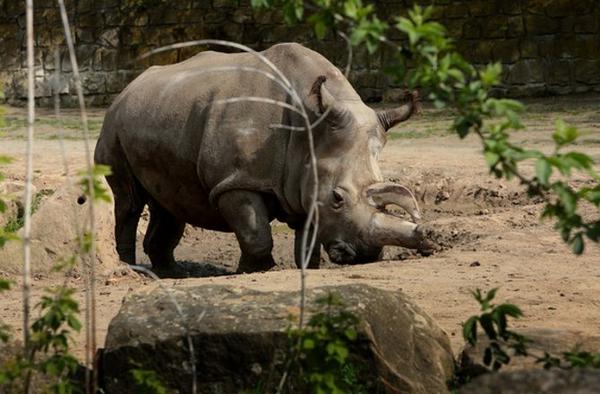 A 31 year old female of Northern White Rhino (Ceratotherium simum cottoni), one of the last five of these species, died of a ruptured cyst at the Dvur Kralove Zoo in the Czech Republic on Monday, July 27, BBC reports.

Nabiré was born the Dvur Kralove Zoo, November 15, 1983. Her health was severely impaired with uterine cysts, which is why she wasn't able to breed naturally.

"The pathological cyst inside the body of Nabire was huge. There was no way to treat it", said Jiří Hrubý, a rhino curator at the zoo.

With Nabire's death, only three females and one male remain alive. One Northern White Rhino is currently at the San Diego Zoo, while the last three live at the OI Pejeta Conservancy reserve in Kenya.

In an attempt to save the species from extinction, four rhinos were moved from the Czech zoo to Kenya's natural environment, in 2009, in hope that living in their natural surroundings would prompt the rhinos to breed. Unfortunately, the attempt was unsuccessful.

The Northern Whito Rhino species are facing extinction for years because of natural habitat loss and hunting. Nabire was long hoped to save the animals from extinction, as she was the only fertile female alive. The conservationists were planning to harvest eggs from her ovaries, and use it for in vitro fertilization (IVF).

The problem is that the females of the white rhino species produce only one mature egg in a 30 day period, so the harvested eggs are immature. The scientists are hoping to find a way to artificially mature the eggs in the lab. In a case of successful maturation, the eggs would have to be fertilized by the last living white rhino male, or by using sperm samples collected and frozen throughout the years.

If this happens, the baby rhino would have to be carried by a female of closely related species, presumably of the Southern White Rhinoceros.

The Dvur Kralove Zoo is planning to put every effort into saving the species from extinction: "It is our moral obligation to try to save them. We are the only ones, perhaps with San Diego Zoo, who have enough of collected biological material to do so", zoo director P. Rabas said in a statement.

Nabire's keepers feel very sorry for her loss: "Nabire was the kindest rhino ever bred in our zoo", Rabas explained.