Water levels in Russian Lake Baikal, world's oldest and deepest body of freshwater, fell to their lowest point in 60 years during January 2015. Authorities in Buryatia and Irkutsk regions declared a state of emergency to allow a solution to be found.

During Summer and Autumn of 2014 a complicated hydrological situation developed in Angara and Baikal basin due to high temperatures and considerable deficit of rainfalls which led to shortage of water in the rivers of the basin, EMERCOM of Russia explained, but the crisis is also being blamed by many on excessive drainage for a major hydroelectric station.

As of January 23, 2015, the water level in Lake Baikal is at 456.08 m and scientists expect the critical point of 456 meters might be reached in the first half of February.

Russia’s Natural Resources Minister, Sergei Donskoy, asked the government to intervene with fears over disruption to heat and water supplies in both Buryatia and Irkutsk.

Vladimir Artamonov, State Secretary – Deputy Minister of Emergency Situations, said that to prevent a disaster of extreme shortage of water in Lake Baikal there was a working group of the Government Society Functioning Commission set up in 2015.

The working group prepared and introduced to the Russian Government a bill on setting maximum water levels in Lake Baikal for economic and other activities during autumn and winter 2014 – 2015. This measure is temporary and will stay in place until the situation is stabilized, EMERCOM said.

“In order to ensure immediate functioning of the society and stable operation of social and potentially hazardous facilities, facilities of energy and economics in conditions of extreme shortage of water in 2015, managing bodies, forces and facilities of the territorial subsystems of the Single State Disaster Management System and Main Offices of the Russian Emergencies Ministry for Buryatia and Irkutsk Region were put on standby,” Mr. Artamonov said.

Buryatia officials have accused the Irkutsk Hydroelectric Power Station of having contributed to the crisis through its excessive drainage of the lake during Spring and Summer last year to produce more power, the Siberian Times writes.

Governor of Buryatia, Vyacheslav Nagovitsyn, said there were already reports of underground springs drying up, fish disappearing and wildfires increasing. 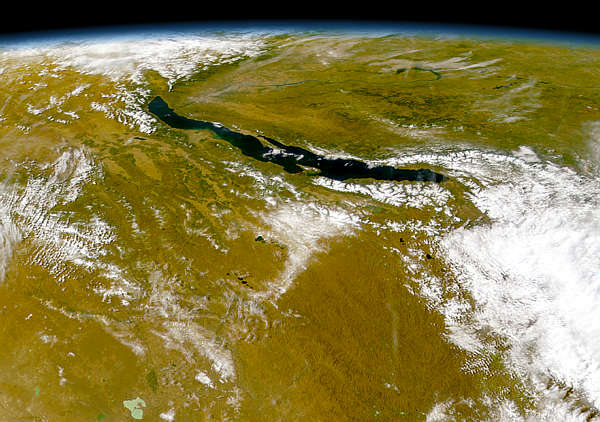 Lake Baikal is the largest reservoir of fresh water on Earth. It contains 20% of the unfrozen drinking water on the planet and is a home to a rare and diverse ecosystem. According to UNESCO, the lake is home to 1 340 animal species and 570 plants. Of these, 745 animals and 150 plants are found nowhere else on Earth. Its depth is some 1 700m (5 577 feet). The lake is also the world's oldest, dating back about 25 million years.