Hawaiian Volcano Observatory (HVO) said in their Kilauea volcano status update issued 03:42 UTC today, that the leading edge of the lava flow has not advanced since Thursday, October 30 when it was in a residential area approximately 155 meters (170 yards) above Pāhoa Village Road, but active breakouts of lava were present within 10 meters (11 yards) of the stalled front and for several hundred meters (yards) upslope. 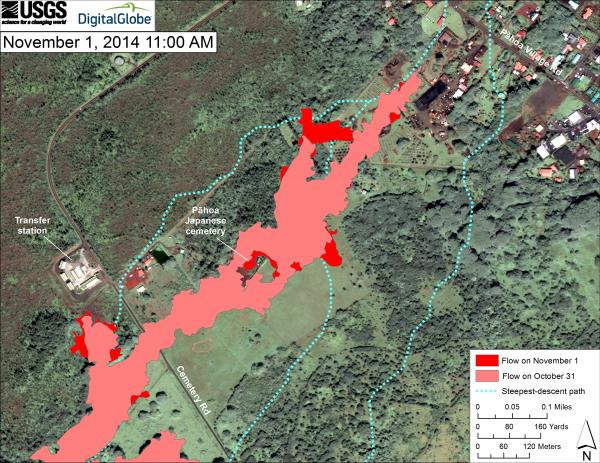 This map uses a satellite image acquired in March 2014 (provided by Digital Globe) as a base to show the area around the front of the June 27th lava flow. The area of the flow on October 31, 2014, at 12:25 PM is shown in pink, while widening and advancement of the flow as mapped on November 1 at 11:00 AM is shown in red. The dotted blue lines show steepest-descent paths in the area, calculated from a 1983 digital elevation model (DEM). The dominant breakout is that northeast of the Pāhoa cemetery. This breakout reconnected with the north edge of the flow on private land farther downslope, forming a kipuka. The breakout near the transfer station was also active, but had slowed considerably. The leading edge of the flow has not advanced since Thursday, October 30, 2014, and remains at 19.49590, -154.95256 (Decimal Degrees; WGS84). Steepest-descent path analysis is based on the assumption that the DEM perfectly represents the earth's surface. DEMs, however, are not perfect, so the dotted blue lines can be used to infer only approximate flow paths. For calculation details, see http://pubs.usgs.gov/of/2007/1264/. (see large map) Image credit: USGS / HVO

Activity behind the lava flow's leading edge continued with localized breakouts of molten lava within the flow's interior and along its side margins. Kīlauea summit's most recent episode of DI tilt that began on Wednesday, October 29 appears to have concluded, with inflationary tilt leveling off early Sunday morning. The level of the summit lava lake at Halemaʻumaʻu Crater, as reflected in web cam images, has recovered somewhat since the bottom turn of the DI that registered on October 31.

No significant changes were noted near Puʻu ʻŌʻō, HVO reported on Sunday, November 2, 2014 at 19:05 UTC. Seismic tremor continued at low and relatively steady amplitudes, no earthquakes were located in the vicinity of the cone, and webcams revealed no strong variations in the pattern of glow from degassing vents nor the configuration of the crater floor. The tiltmeter is still recovering from Thursday's malfunction, so it is difficult to interpret tilt data at this time.

The most recent sulfur-dioxide emission-rate measurement for the East Rift Zone was 340 tonnes per day (from all sources) on October 23, 2014.

The most recent sulfur-dioxide emission rate measurements for the summit were 2,700–3,600 tonnes/day for the week ending October 21, 2014. A small amount of particulate material was carried aloft by the plume.

Near-vent areas could erupt or collapse without warning with spatter and/or ash being wafted within the gas plume.

In addition, potentially-lethal concentrations of sulfur dioxide gas may be present within 1 km downwind of vent areas. Active lava flows within forested areas can produce methane blasts capable of propelling rocks and other debris into the air.

All recently active lava flows are within Hawaiʻi Volcanoes National Park and adjacent State land managed by the Department of Land and Natural Resources or the Office of Hawaiian Affairs.