A moderately strong solar flare reaching M2.1 at its peak time erupted from a region located off the east limb today. The event started at 15:20, peaked at 15:26 and ended at 15:31 UTC.

If CME was generated by this eruption Earth directed component is very unlikely. However, this region is about to rotate into Earth view and we'll probably see more action from it.

NOAA SWPC forecasters estimate 85% chance for M-class and 40% chance for X-class solar flares in the next two days. Prime concern for further activity on the Sun are Regions 2157 and 2158 located at the center of the disk.

CME from yesterday's full halo X-class solar flare is closely following and is expected to arrive later in the day pushing conditions to the severe storm level (G3 – Strong) by the beginning of Saturday, September 13. Read more about it here. 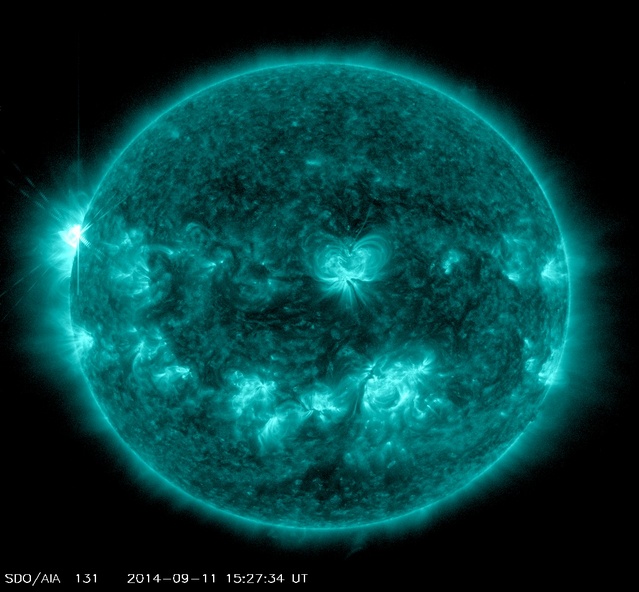 Region 2158 (N15W00, Dkc/beta-gamma) is in perfect geoeffective position today and has the potential to release strong eruptions on the Sun. Being so close to the center of the disk CMEs this region could produce would most likely be Earth directed.

This region appeared to display signs of slight decay and spot consolidation in the trailer portion of the sunspot group yesterday. It had a noticeable separation of the penumbral area, separating into two distinct magnetic polarities, thus losing its delta magnetic configuration.

It exhibited a fairly pronounced ring of intermediate spots surrounding the main leader spot during the night, indicative of significant mixing and instability, but has since shown signs of decay and reorganization of these spots.

Region 2157 (S14W11, Ekc/beta-gamma-delta) is also located in perfect geoeffective position today. It showed consolidation in its leader and intermediate spots yesterday but maintained its delta magnetic configuration in last 12 hours (by 12:30 UTC today). Though it's still fairly inactive this region harbors energy for strong to major eruptions on the Sun. Should it produce CMEs in next couple of days they will most likely be Earth directed.

The remaining spot groups appeared to be stable and predominantly inactive. 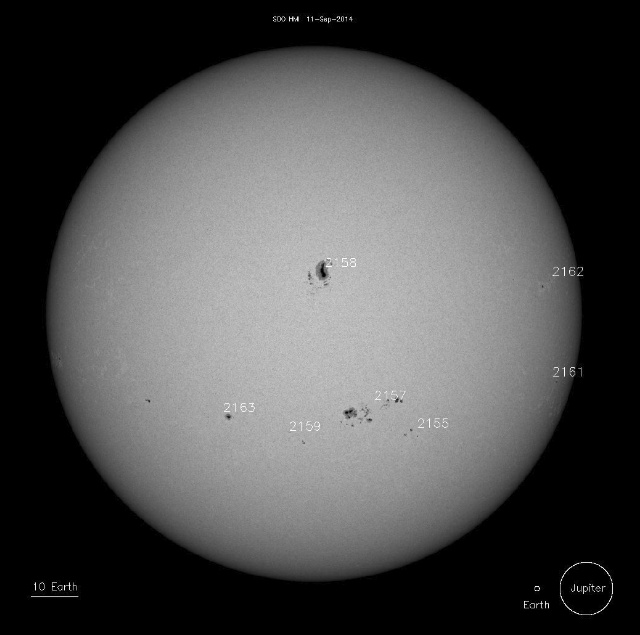