NOAA's Central Pacific Hurricane Center (CPHC) issued a Tropical Storm Watch for Hawaii and Maui Counties in Hawaii on August 6 at 12:00 UTC as hurricanes "Iselle" and "Julio" continued on their path toward the islands. Weather officials said Iselle isn't weakening as previously predicted.

Hurricane "Iselle" reached Category 4 status on Monday before it weakened to a Category 1, but then gained some strength again on Wednesday.

When Iselle makes landfall Thursday night it will be Hawaii's first direct hit in 22 years!

According to latest warning issued by JTWC at 10:00 UTC today, Hurricane "Iselle" was located approximately 401 nautical miles (461 miles, 740 km) east-southeast of Hilo, Hawaii, and has tracked west-northwestward at 16 knots (18 mph, 29 km/h) over the past six hours.

CPHC expects the outer winds of Iselle may reach the easternmost Hawaiian Islands early Thursday afternoon. Heavy rains may bring flash floods and mudslides as Iselle approaches. Large and dangerous swells from Iselle were expected to reach the main Hawaiian Islands on Wednesday, August 6, while winds of tropical storm strength are possible on the Big Island on Thursday, August 7. 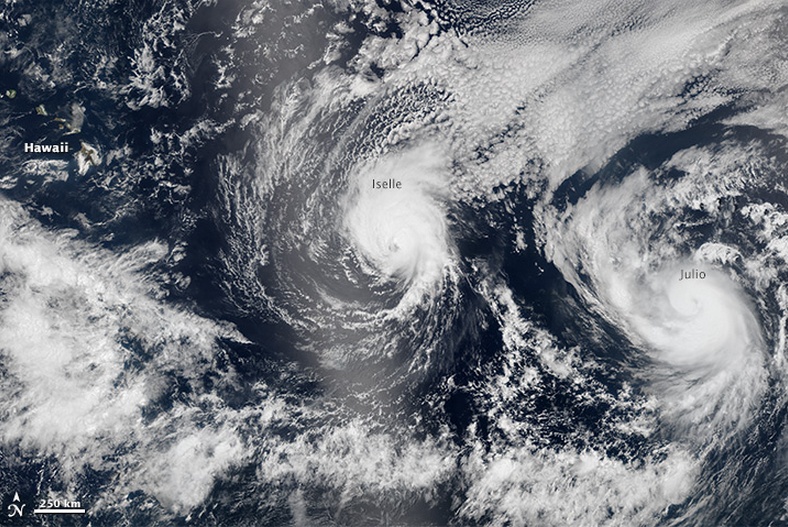 Iselle is closely being followed by Hurricane "Julio", which reached hurricane status at 09:00 UTC on August 6 thus becoming fifth hurricane of the 2014 Eastern Pacific Ocean hurricane season. Julio is expected to gradually strengthen today and tomorrow.

Forecasts suggest that the eye of Julio will pass north of the Hawaiian Islands on August 10, but it is possible that there will be some effects on land. 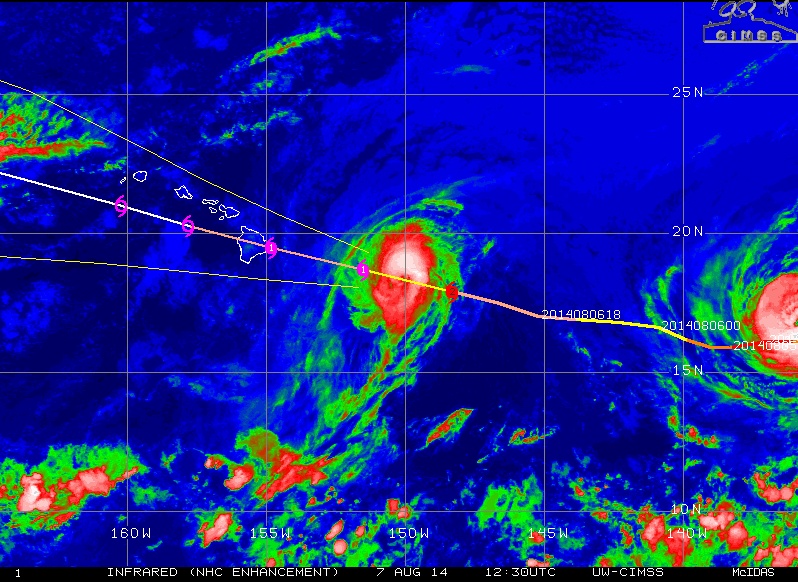 System 98E is expected to move to the west then west-northwest over the next couple of days and the National Hurricane Center gives it a very low (10 percent) chance of developing into a tropical depression over that time.

Genevieve revived and strengthens into a hurricane

Satellite data shows that the structure of Genevieve has improved rapidly into a hurricane. At 15:00 UTC on August 6, the center of Tropical Storm "Genevieve" was located near latitude 12.8 north and longitude 176.8 west. That puts the center of Genevieve about 1,065 miles (1,710 km) south of Midway Island and about 555 miles (895 km) west-southwest of Johnston Island.

CPHC noted that Genevieve is moving toward the west-northwest near 17 mph (28 km/h) and this motion is expected to continue through Thursday. Maximum sustained winds are near 75 mph (120 kph) and Genevieve is expected to become a typhoon in the west Pacific in the next day or two. (Goddard)

Video below shows Iselle, Julio and Genevieve in motion from August 2 – 4, as observed by the GOES-West weather satellite.