The weekend of July 12 – 13 brought another outbreak of noctilucent clouds (NLCs) to Europe, SpaceWeather reports.

Across the northern reaches of the continent, skies were criss-crossed by signature ripples of electric blue, like these photographed by Jaan Jalgratas of Tartu, Estonia: 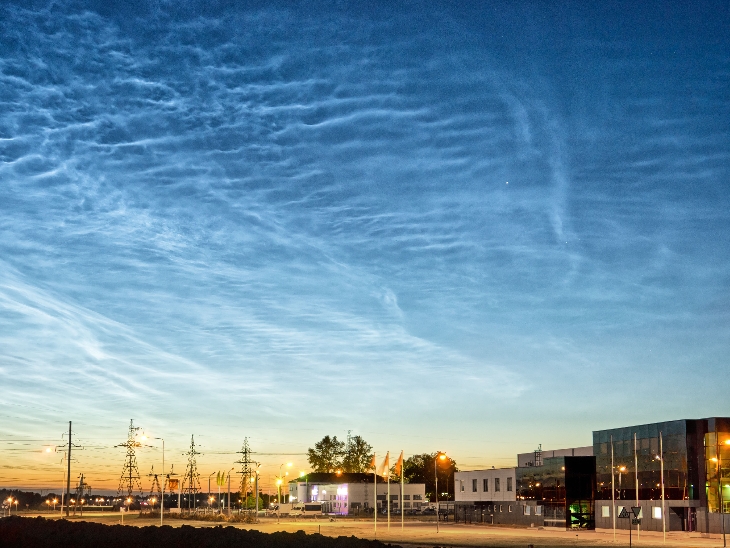 "The display was very bright and it extended at least 35 degrees above the horizon," says Jalgratas. "It was my best sighting ever."

SpaceWeather explains, "The natural habitat of noctilucent clouds is the Arctic Circle. In recent years, however, they have spread to lower latitudes with sightings as far south as Utah and Colorado. This will likely happen in 2014 as well. Observing tips: Look west 30 to 60 minutes after sunset when the Sun has dipped 6o to 16o below the horizon. If you see blue-white tendrils zig-zagging across the sky, you may have spotted a noctilucent cloud."

Night clouds or noctilucent clouds are tenuous cloud-like phenomena that are the "ragged edge" of a much brighter and pervasive polar cloud layer called polar mesospheric clouds in the upper atmosphere, visible in a deep twilight. They are made of crystals of water ice. Noctilucent roughly means night shining in Latin. They are most commonly observed in the summer months at latitudes between 50° and 70° north and south of the equator. They can only be observed when the Sun is below the horizon.

They are the highest clouds in Earth's atmosphere, located in the mesosphere at altitudes of around 76 to 85 kilometres (47 to 53 mi). They are normally too faint to be seen, and are visible only when illuminated by sunlight from below the horizon while the lower layers of the atmosphere are in the Earth's shadow. Noctilucent clouds are not fully understood and are a recently discovered meteorological phenomenon; there is no record of their observation before 1885.

Noctilucent clouds are first known to have been observed in 1885, two years after the 1883 eruption of Krakatoa. It remains unclear whether their appearance had anything to do with the volcano eruption, or whether their discovery was due to more people observing the spectacular sunsets caused by the volcanic debris in the atmosphere. Studies have shown that noctilucent clouds are not caused solely by volcanic activity, although dust and water vapour could be injected into the upper atmosphere by eruptions and contribute to their formation.

There is evidence that the relatively recent appearance of noctilucent clouds, and their gradual increase, may be linked to climate change. The author of this study, atmospheric scientist Gary Thomas of the Laboratory for Atmospheric and Space Physics at the University of Colorado has pointed out that the first sightings coincide with both Krakatoa and the nascent Industrial Revolution, and they have become more widespread and frequent throughout the twentieth century, including an uptick between 1964 and 1986.