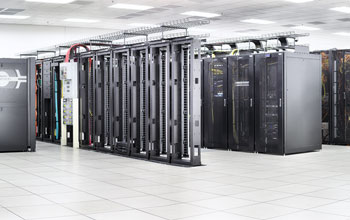 Blue Waters of the National Center for Supercomputing Applications (NCSA) at the University of Illinois, is a petascale supercomputer, one of the fastest in the world. On August 08, 2007, the resolution was passed to fund the acquisition and deployment of the world’s most powerful leadership-class supercomputer and $208 million were awarded to it by the NSF.

Blue Waters was formally announced available for research usage on April 2, 2013. A partnership among NSF, the State of Illinois, the University of Illinois and the Great Lakes Consortium for Petascale Computation, this supercomputer is a class in itself.

It is capable of a peak performance of nearly 12 petaFLOPS (12 quadrillion floating point operations per second) and showed sustained performances of humongous proportions for activities of scientific nature.

“With Blue Waters, scientists are beginning already to predict the behavior of complex biological systems, understand how the cosmos evolved after the Big Bang, design new materials at the atomic level, predict the behavior of earthquakes, hurricanes and tornadoes, and simulate complex engineered systems like the power distribution system of airplanes and automobiles,” said Alan Blatecky, NSF division director for Advanced Cyberinfrastructure.

Blue Waters has enabled 30 scientific research teams, since March 2012, to advance in research related to elementary particle physics, molecules and materials, tornadoes and climate change and cosmology. This research has thrown light upon the change and evolution of the world as a whole, showing that this supercomputer can help in the understanding of daily activities and environmental changes.

“Blue Waters is an example of a high-risk, high-reward research infrastructure project that will enable NSF to achieve its mission of funding basic research at the frontiers of science,” said NSF Acting Director Cora Marrett. “Its impact on science and engineering discoveries and innovation, as well as on national priorities, such as health, safety and well-being, will be extraordinary.”

The five major activities that have been the forte for Blue Waters have been Modeling HIV, Global climate change, Earthquake prediction, Flood assessment, drought monitoring, and resource management and Fundamental properties of nature.

Blue Waters has enabled Klaus Schulten and his team at UIUC to understand the HIV genome and go deep into detailed minute details about this fatal virus. The team is using Blue Waters to investigate complex and fundamental molecular dynamics problems requiring atomic level simulations that are 10 to 100 times larger than those modeled to date, providing unprecedented insights.

The role of clouds in the ever-changing Global Climate has been brought under scrutiny by Cristiana Stan and James Kinter of George Mason University for modeling the climate change and future scenarios.

Earthquake prediction is essential for the safety and security of the people of this world. Blue Waters helped in leading large scale stimulations to incorporate the whole of Los Angeles, including all natural and human infrastructures. This type of research was of magnitude of unprecedented proportions.

Patrick Reed and his team from Penn State, Princeton and the Aerospace Corporation, use Blue for space-based Earth science satellite constellation designs that require optimization and greater understanding.

“Blue Waters enables us to perform the most detailed and realistic simulations of sub-atomic particles and their interactions to date,” said Robert Sugar, professor of physics at the University of California, Santa Barbara. “Studies such as these are a global endeavor, and the large data sets produced on Blue Waters will be shared with researchers worldwide for further discoveries.” He has used Blue Waters for the understanding of the fundamental nature of the universe.

Titan Cray XK47 at Oak Ridge National Laboratory (17.59 petaflops/s) is the world’s fastest supercomputer and helps research of similar nature. Sequoia BlueGene/Q, the second fastest, at Lawrence Livermore National Laboratory (16.33 petaflops/s) and Fujitsu’s K, the third fastest, at the RIKEN Advanced Institute for Computational Science in Kobe, Japan (10.51 petaflops/s) complete the list for the top three of the world’s supercomputers.

These computers are faster as compared to Blue Waters and of greater efficiency and are involved in the same type of research. The plus point for Blue Waters is its availability to the public for better research purposes.

“Today’s dedication celebrates Blue Waters, which promises to accelerate the pace of scientific progress across multiple disciplines,” said Farnam Jahanian, head of NSF’s Directorate for Computer and Information Science and Engineering. “Blue Waters is a national resource that will allow researchers access to the most powerful computational resources available today, furthering research across all scientific disciplines and enabling the investigation of problems not possible before.”

Featured image: Blue Waters has been configured to solve the most challenging compute-, memory- and data-intensive problems in science and engineering. It has tens of thousands of chips (CPUs & GPUs), more than a petabyte of memory, tens of petabytes of disk storage, and hundreds of petabytes of archival storage.