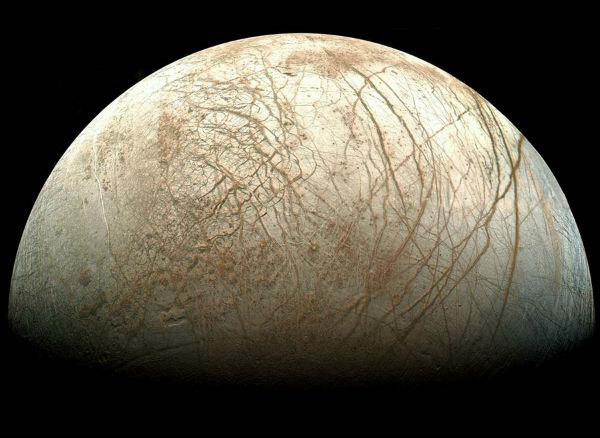 Early in December NASA officials announced that they plan to launch a $1.5 billion rover to Mars in 2020. NASA investigates the possible habitability of Europa, Jupiter’s fourth-largest moon. One concept that may be gaining traction is a so-called “clipper” probe that would make multiple flybys of the moon, studying its icy shell and suspected subsurface ocean as it zooms past. It is believed that Europe is the best candidate for life beyond Earth in Solar System. About 3,100 kilometers (1,900 miles) wide moon Europe gains a large ocean of liquid water beneath its icy shell. It is considered that this ocean is likely in direct contact with Europa’s rocky mantle, raising the possibility of all sorts of interesting chemical reactions. The irradiation of Europa’s surface and tidal heating of its interior also mean the moon likely has ample energy sources. 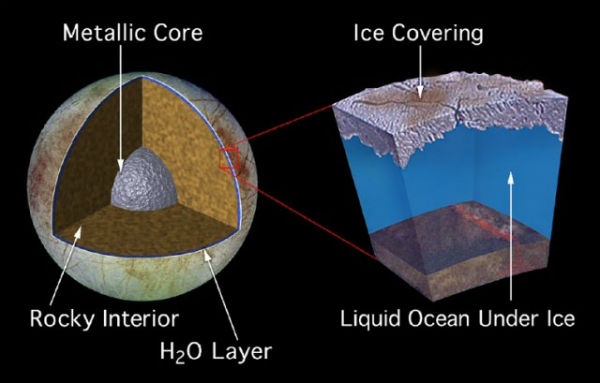 NASA has long been interested in exploring the Europe and its ocean. Several years back, NASA drew up an ambitious mission concept called the Jupiter Europa Orbiter (JEO). According to the 2011 Planetary Science Decadal Survey,  JEO mission (which would have made detailed studies of Europa and the volcanic moon Io) was the second-highest priority among large-scale missions, just behind Mars sample-return. But the planned cost of $4.7 billion was just too high.

Researchers got to work developing a leaner, cheaper Europa mission that would fit under a firm $2 billion cost cap and they came up with two main options: the clipper and a Europa orbiter. New orbiter would not be able to carry an instrument that could investigate the composition and chemistry of Europa’s surface, atmosphere and ocean. Europe got the intense radiation environment around Europa so the orbiter would have to be heavily shielded which adds weight and cost. 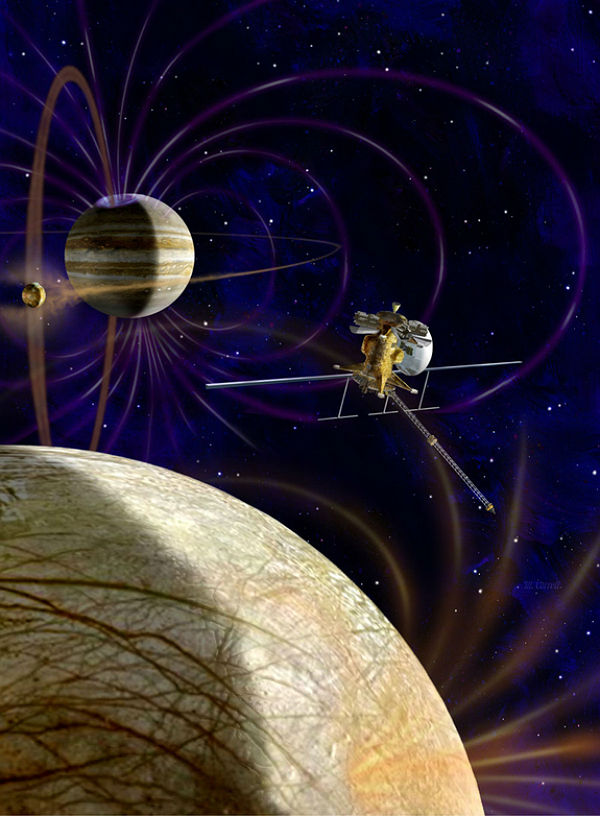 The Clipper would carry a number of scientific instruments, including ice-penetrating radar, a topographical imager, a magnetometer, an infrared spectrometer, a neutral mass spectrometer and a high-gain antenna. Clipper may need to be powered by solar arrays which are considerably cheaper than advanced stirling radioisotope generators, which convert the heat from plutonium-238’s radioactive decay into electricity.

The Clipper would enter into orbit around Jupiter, then study Europa during dozens of flybys over the course of 2.3 years. On its closest passes, it would come within just 25 km (15 miles ) of the moon’s frozen surface. This should help the probe collect important data such as the thickness of its ice shell and the saltness and approximate depth of its ocean.

This information, along with the spacecraft’s detailed imagery of the moon’s surface, could help guide a potential lander mission that would search for signs life on Europa. The Clipper could probably be ready to launch between 2020 and 2022 and its journey to Europa would take about six years.

Mission proponent David Senske, of NASA’s Jet Propulsion Laboratory in Pasadena, California and rest of the team will continue developing the mission concept. Preliminary concept review is scheduled for April. Some scientists who want close-up studies of potentially habitable moons such as Europa and the Saturn satellite Enceladus were disappointed that NASA selected another Mars rover mission for 2020. But Senske said the agency’s mounting successes at the Red Planet — and the public interest missions such as Curiosity have generated — could eventually make more far-flung exploration efforts possible.

Featured image: Europa, as viewed from NASA’s Galileo spacecraft. Visible are plains of bright ice, cracks that run to the horizon, and dark patches that likely contain both ice and dirt. (Credit: NASA/Ted Stryk)