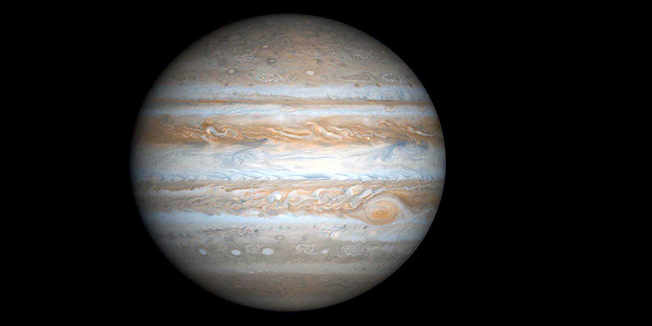 There has been a visual sighting of an apparent fireball on Jupiter on September 10, 2012. The amateur who observed the flash was Dan Petersen, from Oregon, who made the observation at approximately 11:35 UTC on September 10.

Petersen reported it to Richard Schmude of the Association of Lunar and Planetary Observers (ALPO). From the time and position given, the flash was on the North Equatorial Belt at approximately L1=335, L2=219, L3=257. 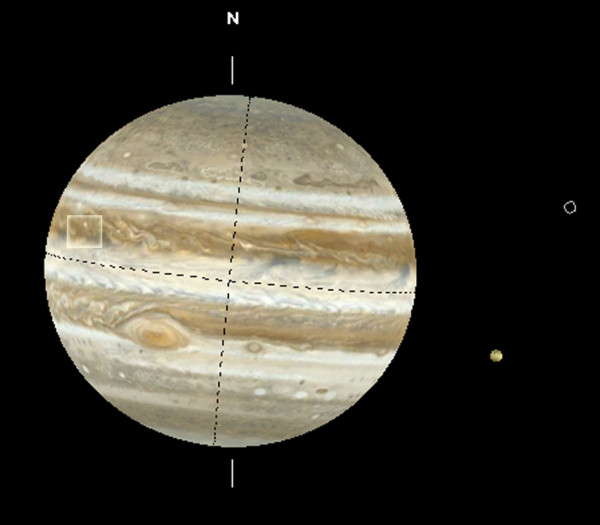 On the Cloudy Nights astronomy forum, Petersen described his sighting:

This morning (9/10/2012) at 11:35:30 UT, I observed a bright white two second long explosion just inside Jupiter’s eastern limb, located at about Longitude 1 = 335, and Latitude = + 12 degrees north, inside the southern edge of the NEB. This flash appeared to be about 100 miles in diameter. I used my Meade 12″ LX200 GPS telescope and a binoviewer working at 400X for the observation, seeing was very good at the time. I was thinking about imaging Jupiter this morning but decided to observe it instead, had I been imaging I’m sure I would have missed it between adjusting webcam settings and focusing each avi. We’ll have to wait and see if a dark spot develops inside the southern regions of the NEB over the next day or two. Good luck imaging this. My best guess is that it was a small undetected comet that is now history, hopefully it will sign its name on Jupiter’s cloud tops.

An amateur astronomer in Dallas Texas, George Hall captured the impact flash in his webcam (website and image). 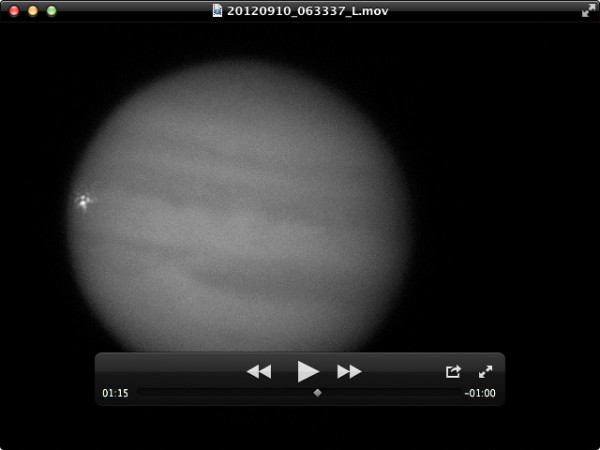 The fireball was probably caused by a small asteroid or comet hitting Jupiter. Similar impacts were observed in June and August 2010. An analysis of those earlier events suggests that Jupiter is frequently struck by 10 meter-class asteroids–one of the hazards of orbiting near the asteroid belt and having such a strong gravitational pull.