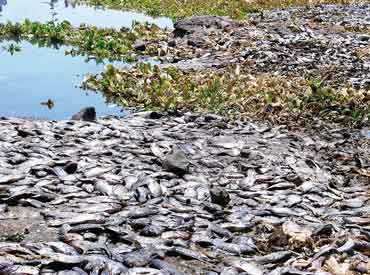 Since last week, thousands of Mozambique Tilapia fish were found dead on the river banks at Hatvalan in Daund division, about 76 km from Pune.

The fish apparently died because of thick blackish water flowing in the river bed. Ironically, Mozambique Tilapia is considered as one of the most resilient species of fish, known to withstand unfriendly environmental conditions.

To make matters worse, the same dead fish were taken to market to be sold by local fishermen. Pune and Mumbai are the primary markets for these fish. According to experts, in May freshwater springs that open into the river dry up, and hence the dissolving factor of oxygen in the water changes accordingly.

This increases the pollution level, causing the fish to die. A study conducted by Jal Biradari and Maharashtra Vikas Kendra last year had shown that the nitrate level in the Bheema river was 10-50 mg per litre, whereas the permissible limit specified by the Bureau of Indian Standards (BIS) is 45 mg/litre. The natural nitrate level should be less than 1 mg/litre, but due to pollutants, the level has shot up.

Dr Ashok Rasage, taluka medical officer of Daund, said, “For a week, large numbers of fish were found on the river banks. We have sent them and the samples of water to the state health laboratory and are waiting for the lab report.”

Dr Sudhakar Kokane, district health officer, also confirmed the incident but said he would get more information from officials.

For activists though, the matter is of serious concern. Ankush Kotwal of Shetkari Sanghtana, said, “The chemical effluents from nearby factories which manufacture sulphuric acid enter the river directly.  Also, the Pune Municipal Corporation(PMC) does not treat the sewage water and instead releases it directly into the river. This has caused havoc on the aquatic life here.”