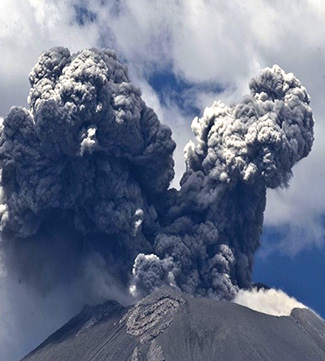 Fresh blasts from Mexico’s Popocatepetl volcano spewed fiery rock and caustic ash over residents around the Mexico City suburb of Puebla, already on edge after weeks of ongoing eruption.

Residents of the nearby village of Santiago Xalitzintla rushed into the town square during the middle of the night as terrifying rumblings and blasts caused buildings to shudder. Last week residents in eastern parts of Mexico City were provided with face masks to protect them against ash raining over the region from Popocatepetl’s blasts.

Prevailing winds have so far spared the capital district from significant ash falls.

Popocatepetl has become increasingly active during 2012.

Volcán Popocatépetl, whose name is the Aztec word for smoking mountain, towers to 5426 m 70 km SE of Mexico City to form North America’s 2nd-highest volcano.The glacier-clad stratovolcano contains a steep-walled, 400 x 600 m wide crater. The generally symmetrical volcano is modified by the sharp-peaked Ventorrillo on the NW, a remnant of an earlier volcano.

At least three previous major cones were destroyed by gravitational failure during the Pleistocene, producing massive debris-avalanche deposits covering broad areas south of the volcano. The modern volcano was constructed to the south of the late-Pleistocene to Holocene El Fraile cone.

Three major plinian eruptions, the most recent of which took place about 800 AD, have occurred from Popocatépetl since the mid Holocene, accompanied by pyroclastic flows and voluminous lahars that swept basins below the volcano. Frequent historical eruptions, first recorded in Aztec codices, have occurred since precolumbian time.

A major eruption in 2000 forced 50,000 people to evacuate in three states that surround the towering mountain.