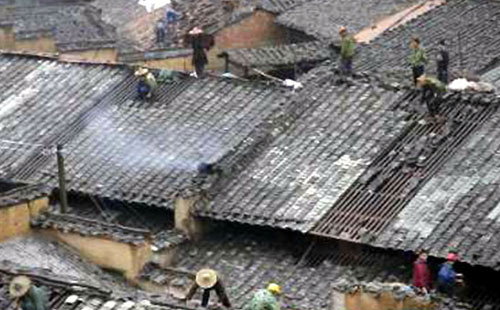 From China’s Hunan province came reports that a bridge has collapsed. It is unknown how many people were on the bridge when it buckled and fell into the river at around 8:30am (local time).

Fire department official Su Tao told Xinhua that witnesses say they saw people falling into the water when the bridge collapsed. He says firefighters have not rescued anyone yet but some people have managed to climb ashore.

Nearly 3,500 homes have been destroyed, and about 29,000 people are sheltering in evacuation centres. Relief teams are said to have reached the affected area in Minxian county.

County officials said many roads had been blocked, homes destroyed and farmland ruined by the rainstorms.

The downpours were said to have lasted only about an hour but brought up to 70mm of rain in some parts.

Some 2,000 officials and 800 military personnel have been deployed to bring blankets and other relief materials to the affected zones.

The death toll had risen to 42 and 17 others remained missing as of 4 p.m. Sunday, May 13, 2012 after hail and torrential rains battered a mountainous county in northwest China, authorities said late Sunday.

The storms had affected 358,000 people in Minxian county, Gansu province, forcing the evacuation of nearly 30,000 local residents. Another 87 people had been hospitalized.

More rains are expected to hit the county on Monday, according to the local weather bureau.