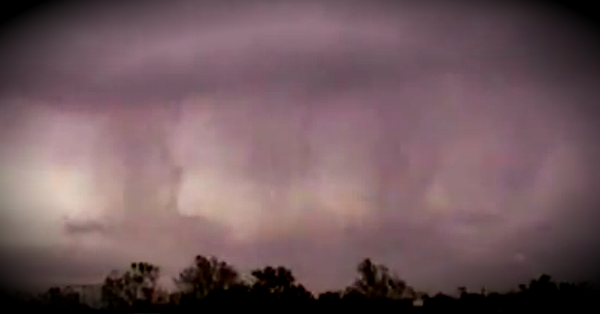 A rare heat burst occurred on Thursday in Bussey, about 50 miles southeast of Des Moines, Iowa, when suddenly  temperatures spiked more than 10 degrees. Data from the Mesonet/KCCI Schoolnet 8 weather station shows the sudden temperature change  shot up from about 74 degrees to about 85 degrees and at the same time the dew point dropped from about 73 to about 54. It started about 8 a.m. and was over by about 10 a.m. 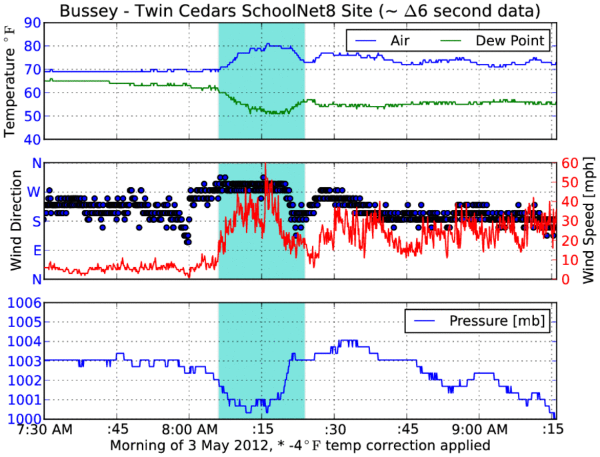 The weather station also recorded a sudden change in the peak wind gusts, jumping from about 15 mph to about 60 mph at about 8 a.m. National Weather Service reported non-thunderstorm wind gusts of 60 mph at 8:12 a.m. The Pella Airport also reported a wind gust of 76 mph 08:11 a.m according to KCCI-TV in Des Moines.

A  heat burst is much more rare than a severe thunderstorm. A similar heat burst was recorded last August 23 in Atlantic when a sudden 20 degree jump was recorded. A heat burst is characterized by a rapid increase in temperature, as much as 20 degrees, a drastic drop in humidity and gusty winds. Heat bursts usually happen at night when there are thunderstorms in the area. Recorded temperatures during heat bursts have reached well above 90 °F (32 °C), sometimes rising by 20 °F (11 °C) or more within only a few minutes. More extreme events have also been documented, where temperatures have been reported to exceed 120 °F (49 °C), although such extreme events have never been officially verified. Heat bursts are also characterised by extremely dry air and are sometimes associated with very strong, even damaging, winds.

If the air is very high aloft and the air is much more dense than the surrounding air then it will accelerate toward the surface. In the case of a heat burst, all the precipitation that cooled the air aloft has been vaporized. Therefore, the precipitation can no longer absorb latent heat. As this dense air accelerates toward the surface it rapidly warms at a dry adiabatic lapse rate compression. What must make a heat burst so rare is that this downdraft must reach extremely high velocities. Velocities must be high enough so that the momentum of the sinking air offsets the fact that it is becoming warmer in temperature and thus less dense than the environmental air it is falling into.

Not only is the air in a heat burst anomalously hot but it is also extremely dry. The extremely high temperatures combined with extremely dry air plus the wind can remove all the moisture out of vegetation. Just like any atmospheric phenomena, heat bursts have differing intensities. The worst heat bursts persist for a significant amount of time and have temperatures that go over 120 F, even in the middle of the night. This extremely hot and dry air can remain in place for several hours before temperatures return to normal.