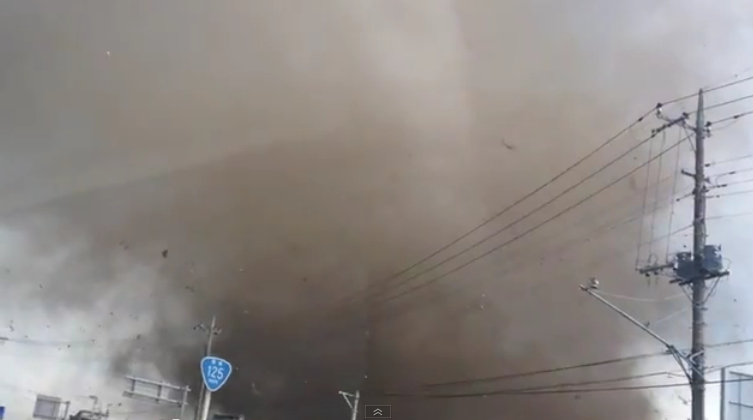 A teenage boy died, around 40 people were injured and up to 250 houses were damaged on Sunday, May 6, 2012 after an apparent tornado hit Ibaraki and Tochigi prefectures, north of Tokyo, local police and firefighters said.

An aerial shot from a Kyodo helicopter shows the path of an apparent tornado that struck Tsukuba, Ibaraki Pref. Sunday afternoon.

Thunderstorms also caused lightning damage and temporarily disrupted bullet train services on the Tohoku, Yamagata and Akita shinkansen lines, according to East Japan Railway Co. The twister, which occurred at around 1 p.m., shattered windows and blew away the roofs of 150 to 200 homes in Tsukuba, Ibaraki Prefecture, leaving two people seriously wounded, one of whom, a 14-year-old boy, died after being taken to hospital.

The city is located around 50 km northeast of Tokyo. In the city of Moka and the towns of Mashiko and Motegi in Tochigi, around 50 houses were damaged and 10 people were injured, they said.

The Japan Meteorological Agency said local observatories had warned the Tokai, Kanto and Tohoku regions of central, eastern and northeastern Japan to brace for possible tornadoes intermittently from Sunday morning as atmospheric conditions were unstable. According to the Mito observatory in Ibaraki, a thunderstorm advisory was issued early Sunday for the whole prefecture.

Hailstones fell in Mito, the prefectural capital, at around 1:20 p.m.Following the gusts, which the Mito observatory attributed to either a tornado or downburst, and the thunderstorms, around 20,000 households in Tochigi, Ibaraki and Saitama prefectures suffered power outages, Tokyo Electric Power Co. said.In Okegawa, Saitama Prefecture, a 40-year-old mother and her 11-year-old daughter fell unconscious after being struck by lightning around 2:20 p.m., police said.

In Uozu, Toyama Prefecture, Yoshihito Yaguramaki, a 64-year-old farmer, was found collapsed in a field and pronounced dead an hour later. Police suspect he was hit by lightning.