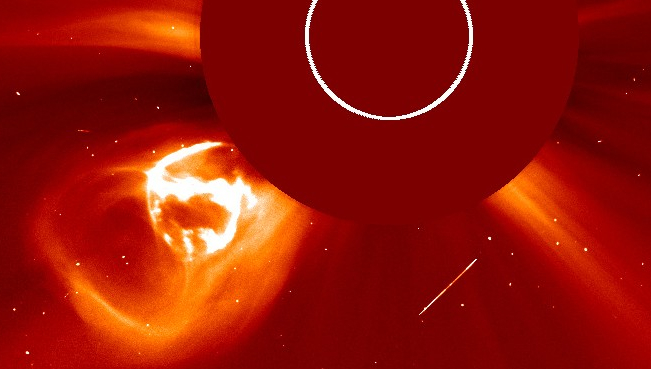 A spectacular Filament Eruption (Prominence) ripped off the lower southeast quadrant of the Sun today and large Coronal Mass Ejection followed but is not heading for the earth. Video by: Solarwatcher.net

Filaments are large regions that contain very dense, cool gas, held in place by the Sun’s magnetic field in the Photosphere Region. These Solar Filaments can sometimes last for several days or months. Filaments and Solar Prominences are the same type of event. This type of event is considered a prominence when it is located off the limb of the Sun and appears bright against the darkness of space. It is called a filament when the cooler gas inside makes it appear darker against the background of the Sun.

GEOMAGNETIC SUDDEN IMPULSE ALERT:
A Geomagnetic Sudden Impulse was detected at 09:21 UTC. This signals the passage of an IP Shock.

CME IMPACT from a coronal mass ejection released from the sun march 10 has slammed into the Earth’s magnetosphere causing a sharp deviation on the interplanetary magnetic field (IMF), which saw the Bz component deviate 96 nT. Solar winds jumped from 400km/s to almost 600km/s on the impact.