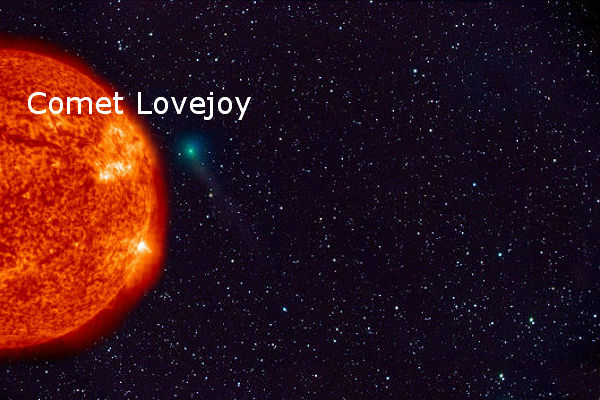 Comet Lovejoy (C/2011 W3) could become as bright as Jupiter or Venus when it "flames out," the glare of the sun will hide the event from human eyes. Solar observatories in space, however, will have a grand view. Yesterday the brightening comet entered the field of view of NASA's STEREO-B spacecraft. Reports are still coming in and the consensus seems to be that the comet is brightening!  It will be the brightest Kreutz-group comet that SOHO has ever observed.

This comet is a true sungrazer, and will skim approximately 140,000 km (1.2 solar radii) above the solar surface on Dec. 15/16," notes Battams. At such close range, solar heating will almost certainly destroy the icy interloper,creating a cloud of vapor and comet dust that will reflect lots of sunlight. The Solar and Heliospheric Observatory (SOHO) will have a particularly good view. (SpaceWeather)

The STEREO spacecrafts are very  far away and we only have limited contact time with them in order to download the data they take. Right now there's two, 5-hour contacts per day. Sungrazer website gave  a direct link to a BIG 103MB zip file containing all the FITS imagesfrom Dec 12 in STEREO/SECCHI HI-1B. It recommends the DS9 tool for viewing FITS images but there are several others you can use. Here are two (very large) files containing all the full-res data released on Sungrazer website on Dec 11. (71MB .tar.gz file ,71MB .zip file )

Where to look for Comet Lovejoy

STEREO/SECCHI will be the first spacecraft to get a clear view of the comet, and in fact it has been visible in our HI-2A imager for the past few days now but still faintly. As the comet approaches perihelion, we will perform our routine COR-2 observations until it reaches the COR-1 (inner coronagraph) camera late on the 15th. We will then focus our attention on that and the extreme ultraviolet (EUVI) instruments. The STEREO spacecraft are very far from Earth and so this only gives us a pretty small amount of data to send back. Both STEREO spacecraft are currently performing as expected and taking science data on a regular basis. 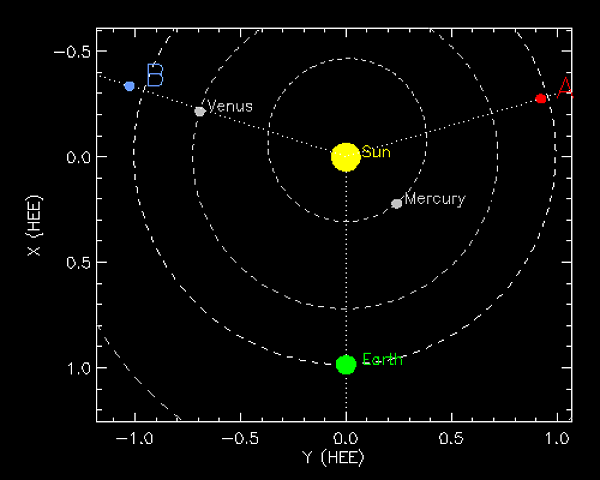 SOHO/LASCO is another sun-watching spacecraft that could observe Comet Lovejoy. The comet will enter LASCO C3 on the 14th at the very lower-left edge of the field of view. LASCO gives the standard 5 images per hour.  UVCS instrument on SOHO has the ability to point itself at a the track of the comet and get some observations. According to calculations derived from a Minor Planet (MPC) Circular, Comet Lovejoy should enter the LASCO C3 field of view early on December 14 (look for it here), entering from the south. 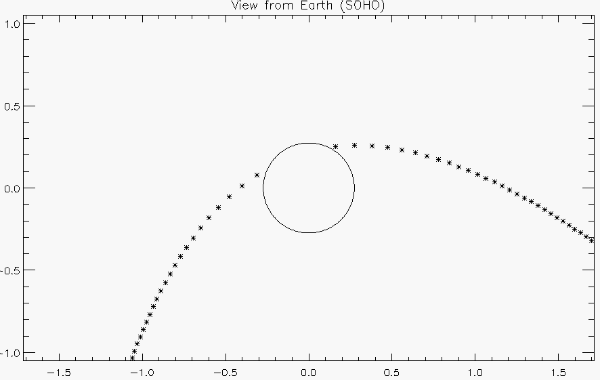 SDO spacecraft observed a comet evaporating in the solar corona in July: the first ever observations of its kind. The comet will reach perihelion behind the Sun as seen from SDO. So SDO will only have a relatively brief window in which to see it before it disappears behind the solar limb. But the SDO team are planning to do some special operations to maximize our chances of observing the comet.

PROBA 2A is an ESA microsatellite pointing to the Sun from LEO. They have an EUV imager that they plan to try and use to observe the comet. A couple of hours after the event, the data in movie format will appear here and in FITS format here. 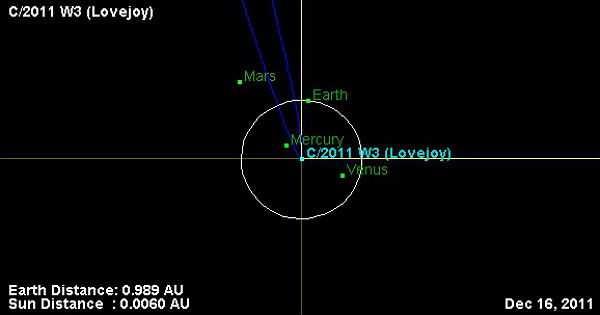 Solar activity has been fairly low with only a pair of low level C-Class flares being detected within the past 24 hours. They took place around Sunspots 1363 which is now out of direct Earth view and 1367 which is about to rotate onto the western limb as well. A new region that rotated into view off the northeast limb should be numbered 1376 on Tuesday. This appears to have been a much bigger sunspot group at one point, based on its large magnetic area. NOAA/SWPC forecasts only 5% possibility of M-class solar flares and 1% for X-class solar flare. 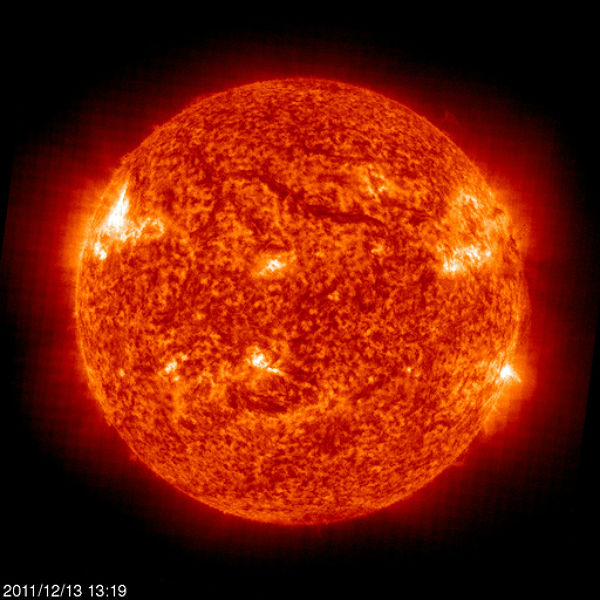 End of comet older than life on Earth

Discovered on Dec. 2nd by amateur astronomer Terry Lovejoy of Australia, the comet is an unusually large member of the Kreutz family. Kreutz sungrazers are fragments of a single giant comet (probably the Great Comet of 1106) that broke apart back in the 12th century. SOHO sees one plunging into the sun every few days, but most are small, no more than 10 meters wide. Comet Lovejoy is at least ten times larger than usual.

This comet is older than life on Earth and now we would watch his spectacular end. For ground-based observers, the comet is now all but lost in the blinding glare of the Sun. But for Sun-watching spacecraft such as SOHO and STEREO, it is an incresingly easy target to view.

And by the way, don't forget, tonight is Geminid meteor shower peak night as well. Lot's of sky events.