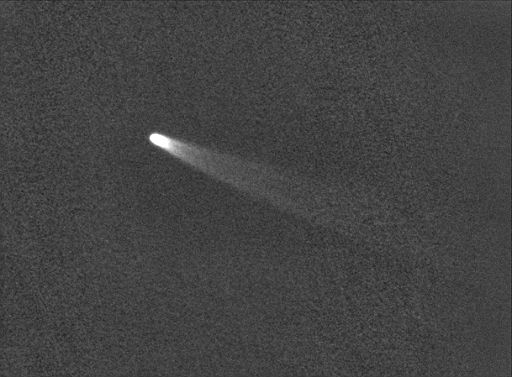 The unexpected survival of comet Lovejoy has amazed astronomers because most comets that have close encounters with the sun are destroyed. Many researchers predicted the comet would likely fizzle out, as the chances of its survival were so low. Comet Lovejoy  zoomed within 87,000 miles (140,000 kilometers) of the sun's surface, making its closest approach at about 7 p.m. EST Thursday (midnight GMT on Dec. 16). Instruments called coronographs aboard several sun-watching space observatories caught the unexpected solar sight.

On Dec.16 between 7pm and 8pm (ET), the SDO team blogged and tweeted live the passage of the comet through SDO's extreme ultraviolet AIA camera. Not long after the first images were made available came the announcement that the comet was seen plunging into the solar atmosphere. A short time later it was seen to re-emerge as Karl Battams reports on his Sungrazing Comets website.

As Comet Lovejoy recedes intact from its Dec. 16th close encounter with the sun, researchers are pondering a mystery of the comet's tail wiggle in transit through the sun's atmosphere. Many experts were predicting Comet Lovejoy would not survive perihelion, where it came within about 120,000 km from the Sun. But some extraordinary videos by NASA’s Solar Dynamics Observatory showed the comet entering and then surprisingly exiting the Sun’s atmosphere. Researchers suggest there could be some kind of helical motion going on, or perhaps there's a projection affect and we're seeing tail material magnetically "clinging" to coronal loops and moving with them. Comet tails are created when their icy surfaces warm up, creating a gas that gets blown outward by the sun's solar wind. Charged particles from the sun can also turn some of a comet's gases into charged ions to form an ion tail. Comet tails always point away from the sun.

We here at the Watchers give a sincerely respect to Karl Battams of Naval Research Lab who runs Sungrazing Comets website for enormous energy and effort and for all hard work on processing the images of Comet Lovejoy from all sunwatching spacecrafts. 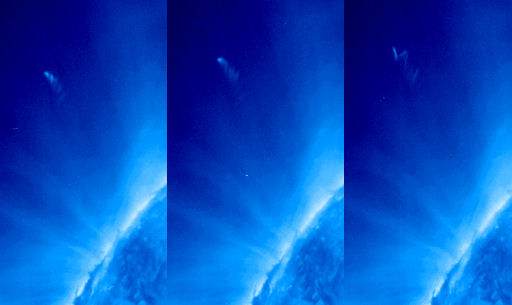 There have been some great images and video of Comet Lovejoy’s close encounter with the Sun, but video put together by Scott Wiessinger from Goddard Spaceflight Center combines and zooms in on the best views from the Solar Dynamics Observatory (SDO), which adjusted its cameras in order to watch the trajectory as seen below.

Lovejoy has a core about 660 feet (200 meters) wide. It belongs to a class of comets known as Kreutz sungrazers, whose orbits bring them very close to the sun. All Kreutz sungrazers are thought to be the remnants of a single giant comet that broke apart several centuries ago. They're named after the 19th-century German astronomer Heinrich Kreutz, who first showed that such comets are related.

Lovejoy is quite large for a sungrazing comet, and experts expected it to die an impressive death. The website Spaceweather.com, for example, predicted Lovejoy would blaze as brightly as Jupiter or Venus in the sky as it neared the sun.

Comet Lovejoy  survived being immersed in the several million-degree solar corona for almost an hour and has re-emerged back into the views of the LASCO and SECCHI coronagraphs, almost as bright as before! The only noteable exception is that it appears to have lost its tail. Its tail is still gently floating out in space where it was before perihelion – probably the dust particles following the same path as the comet, but just at a slightly slower speed.

"I trust that most here appreciate that we are witnessing one of the most extraordinary events in cometary history." Astronomer John Bortle

Scientist will use these images and combined similar images from STEREO-A on the other side of the sun to produce a three dimensional picture. With  SDO images combined it would give an opportunity for unique 3-D picture of how this comet is reacting the the intense coronal heat and magnetic loops.

"This is not simply "news-worthy", or even "of great interest"; this is indeed competely extraordinary." Karl Battams of the Naval Research Lab

STEREOs, SOHO, SDO, PROBA and HINODE – an amazing fleet of sun-watching spacecraft recorded non-stop and there is no missing data from any time of passage of Comet Lovejoy. Astronomers obtained unprecedented scientific data from different spacecraft. The result is an almost overwhelming catalog of visual, narrow-band filtered, extreme ultraviolet, and spectroscopic data of a comet experiencing the most extreme environment the solar system has to offer. Scientists will likely learn about its mass, its physical size, its composition, the size of its dust and dust production rates, and so much more. Objects like this can also provide us with a tremendous amount of information about the solar wind and conditions in the solar corona, which in turn allows us to gain more understanding of the Sun as a driver of "Space Weather" at Earth. 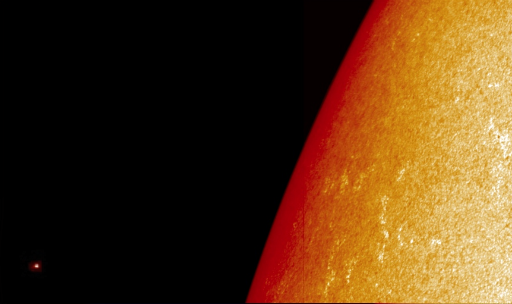 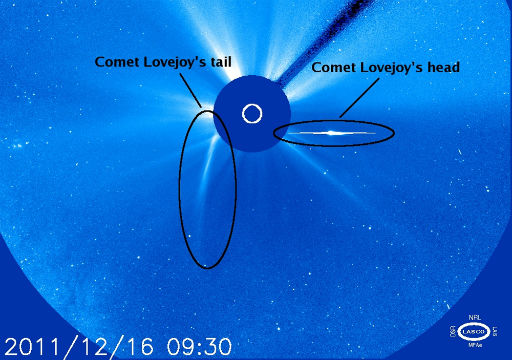 Amateur astronomers are finding themselves able to photograph Comet Lovejoy as it emerges from the glare of the sun. A team led by Czech astronomer Jan Ebr captured this image at dawn on Dec. 17th: 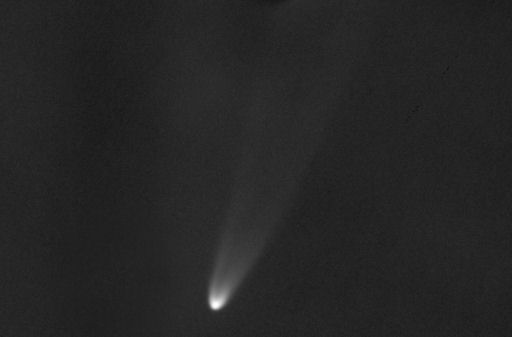