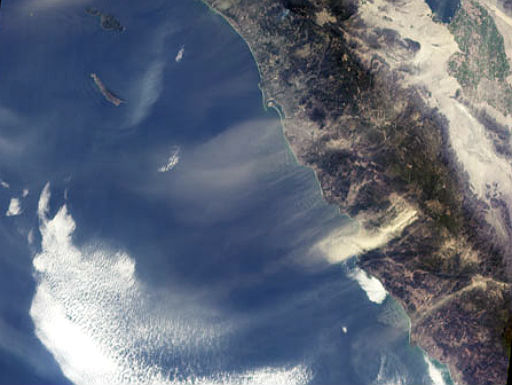 Southern California, San Francisco, Las Vegas, Salt Lake City and other locations from Utah to California and far western Arizona bracing for potentially damaging winds. The Wasatch Range will experience especially powerful east to northeast winds in this situation. The setup in the Wasatch is known as a bora.

Major Pacific Storm Faith is now a category four on the one through five scale. One side of the Southern California area will be dry with damaging winds, the other side with thunder, pounding mountain snow, blizzards, and rainfall. TWS’ Southern California Weather Authority has issued a Severe Weather Statement for areas south and east of Los Angeles County effective now. The alert is for a pending Severe Thunderstorm Watch as high winds and thunderstorms come in on Thursday morning through Friday. 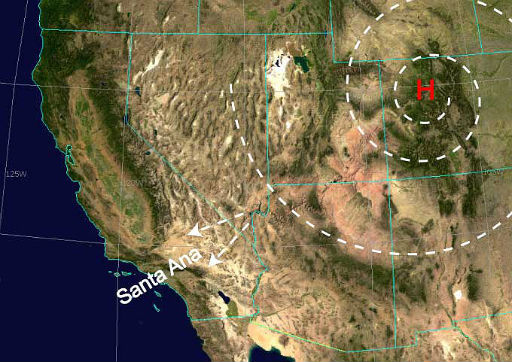 SCWXA has also upgraded the Santa Ana Wind Watch issued a couple days ago to a full Santa Ana Wind Warning. Wind gusts, according to TWS SCWXA wording, will be over 60 mph in the valleys with 80 mph gusts possible and even a mention of 100 mph gusts in the pass locations. This is a dangerous situation.

“A once a decade type wind storm,” is how AccuWeather.com Western Expert Meteorologist Ken Clark is describing the impending Santa Ana winds. The populated Santa Ana wind-prone areas will endure gusts to 70 mph, while the highest gusts on the neighboring mountaintops will range from 80 to 100 mph.

Winds of this magnitude are able to cause damage

Dry air often accompanies Santa Ana events and makes the fuel, such as dry brush, more ready to burn. Any fires that get started and are not extinguished quickly could be whipped into a frenzy by the strong winds.

What are Santa Ana winds?

During the fall and early winter, high pressure over the high desert of the Great Basin region causes winds on the southern side of the high to blow from the east, toward the Pacific Ocean and lower air pressure offshore. The winds push dry air from the inland deserts of California and the Southwest over the mountains between coastal California and the deserts. 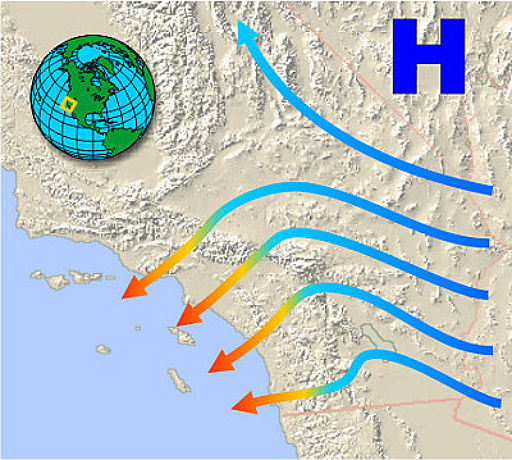 As the air descends from mountains, it is compressed and the temperatures increase. These hot, and very dry winds(relative humidty of 10 to 20% or lower are common) dry out vegetation, increasing the fuel available to feed fires. The gusty winds and eddies of winds swirling through canyons and valleys also fan flames and spread tinders. (NOAA Watch) 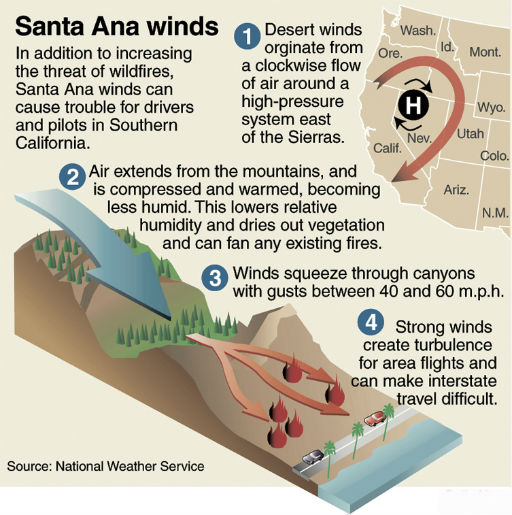