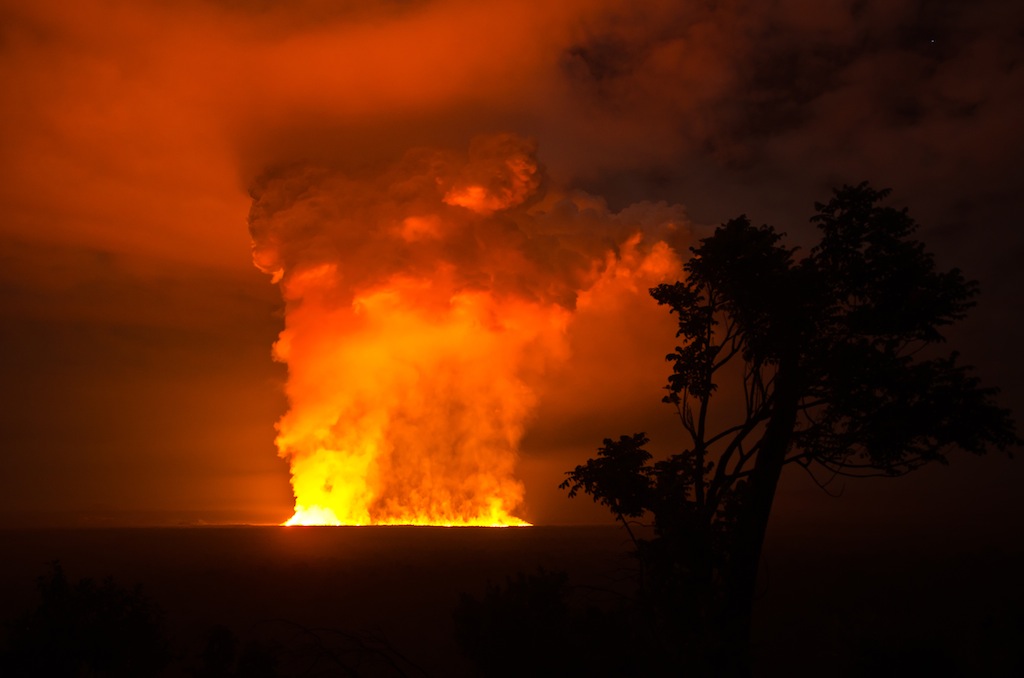 A spectacular fire show started last night when Nyamulagira volcano (also known as Nyamuragira) began an eruption that happens about every two years. The eruption could be seen clearly from the Virunga park headquarters. It appears that the eruption is not happening on the volcano itself, but on the side and lower to the ground. 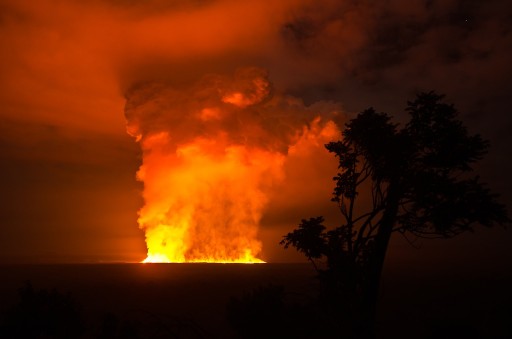 This is not the volcano that tourists hike to see the lava lake, but a far more active volcano just to the north. Most of the lava flows north into an area where no one lives, so it shouldn’t bring harm to people or wildlife as the flow is moving slowly. Eruptions like this one can go on for days, weeks, or even months. (EarthquakeReport/ gorilla – Virunga National Park)


Africa’s most active volcano, Nyamulagira is a massive high-potassium basaltic shield volcano that rises about 25 km north of Lake Kivu, NW of Nyiragongo volcano. Nyamuragira, also known as Nyamulagira, has a volume of 500 cu km, and extensive lava flows from the volcano blanket 1500 sq km of the western branch of the East African Rift. The broad low-angle shield volcano contrasts dramatically with its steep-sided neighbor Nyiragongo.

The 3058-m-high summit of Nyamuragira is truncated by a small 2 x 2.3 km caldera that has walls up to about 100 m high. Historical eruptions have occurred within the summit caldera, frequently modifying the morphology of the caldera floor, as well as from the numerous fissures and cinder cones on the volcano’s flanks. A lava lake in the summit crater, active since at least 1921, drained in 1938, at the time of a major flank eruption. Historical lava flows extend down the flanks more than 30 km from the summit, reaching as far as Lake Kivu. (Smithsonian Institution GVP)

MODIS report:
On the evening of November 6, 2011 a fissure on the flank of Nyamuragira opened, spewing fountains of lava and plumes of volcanic gas and ash in a spectacular night time eruption. Rangers at the Virunga National Park, where Nyamuragira is located, were the first to report the eruption, and described the display as a “monstrous fountain” of lava, which lit the sky up with a bright red glow. Residents of the city of Goma, about 22 miles south of the volcano, also reported a visible red glow. 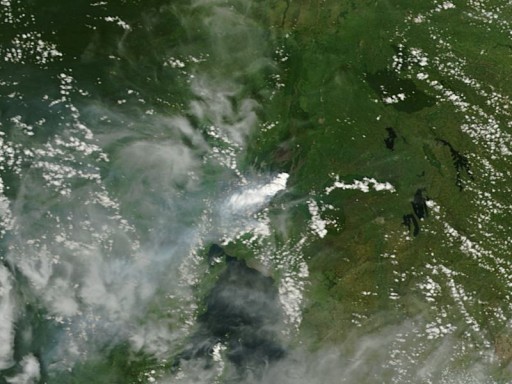 On November 7, the Moderate Resolution Imaging Spectroradiometer (MODIS) aboard NASA’s Terra satellite captured this true-color image of the still-erupting volcano. Although the night-time glow has passed, plumes of volcanic ash and smoke cover the region to the south and west of Nyamuragira, nearly obscuring parts of Lake Kivu. The land around the volcano appears brown and gray, probably discolored by volcanic ash and possibly lava. The eruption is expected to continue for days or possibly weeks.

Located in the Democratic Republic of the Congo, Nyamuragira is a massive high-potassium basaltic shield volcano located north of Lake Kivu, and covers an area of about 800 square miles. It is Africa’s most active volcano. Between 1865 and 2011 there have been 43 confirmed eruptions, with a historical average of 3.5 years between eruptions. Since 1980, there has been an average of one eruption every two years.

The last eruption at Nyamuragira began on January 2, 2010, with lava flowing over 21 miles to the south and southwest of the volcano. The lava flows stayed within the boundaries of Virunga National Park, but the effects of ash and gas emissions were felt in Goma. Drinking water from open spring and rainwater cachements were contaminated by ash, and residents around the volcano reported deaths of domestic animals and damage to crops. At the time of this report, no damage has been reported from the current eruption. (MODIS)