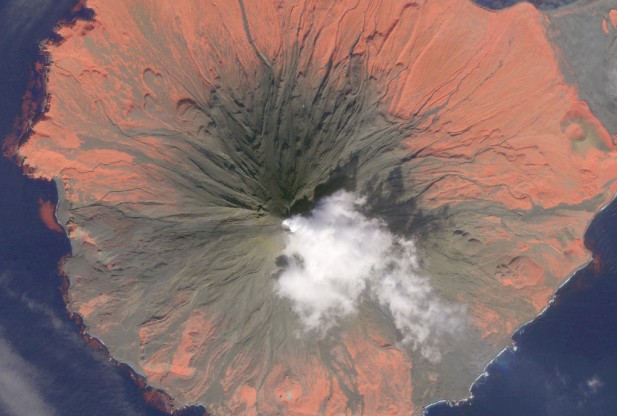 A thermal anomaly was observed in satellite data over the past day, which is consistent with continued growth of the lava dome. No ash emissions have been observed during this current eruptive episode that began in mid-July 2011. No other new reports have been received regarding the volcano.

The current episode of dome growth resumed around September 3. A growing lava dome in the crater increases the possibility of an explosive eruption, but does not necessarily indicate that one will occur. Short-lived explosions could produce ash clouds that exceed 20,000 ft above sea level. These events can occur without warning and may go undetected in satellite imagery for hours.

If lava dome growth continues, it could overflow the crater rim to produce a lava flow and/or collapse to produce pyroclastic flows. Collapse of a lava flow or dome would likely result in the generation of a volcanic ash cloud.

Without a real-time seismic network on the volcano, AVO is unable to track local earthquake activity related to volcanic unrest, provide forecasts of eruptive activity, or confirmation of explosive, ash-producing events. AVO will continue to monitor the volcano using multiple sources of satellite data. (AlaskaVolcanoObservatory)

The two-month long, low-level eruptions occurring at a volcano in Alaska’s Aleutian Islands have volcanologists worried that there could be a larger eruption forthcoming.

Satellite imagery has reportedly shown a lava dome growing inside the volcano’s crater, and the observatory has reports that Mount Cleveland continues to generate heat. To date, there have been no signs of ash clouds, but those, too, could come with little warning.

Scientists are concerned that the dome could completely seal off the crater vent, thus causing pressure to build until it is released suddenly and violently. Alternatively, the dome could topple, which would trigger  molten flow down the mountain that releases gas and ash into the atmosphere while lava and rocks tumble.

Cleveland Volcano rests underneath a flight path between North America and Asia that is said to be utilized by several major airlines, which means that an eruption there could create havoc when it comes to airline travel.

Twenty-one confirmed eruptions have taken place at Cleveland Volcano over the past 230 years, with the only fatality coming in 1944, when a US soldier stationed there during World War II went missing and was presumed dead following a VEI 3 level eruption. The mountain erupted twice in 2010 and three times in 2009.