Petermann Ice Island drifting in the North Atlantic off the shores of Newfoundland, Canada

After more than a year and several thousand kilometers of sailing the seas, Petermann Ice Island is still drifting in the North Atlantic off the shores of Newfoundland, Canada. The ice island has splintered several times since it dropped off the edge of Greenland's Petermann Glacier. Yet still it behaves a bit like the massive ice sheet it left 14 months ago.

Astronauts on the International Space Station used a digital camera to capture this view of Petermann Ice Island A, fragment 2, off of the northeast coast of Newfoundland on August 29, 2011. Spanning roughly 4 kilometers by 3.5 kilometers (2.5 by 2 miles), the ice island is covered with melt ponds and streams, much as the surface of Greenland looks in mid-summer. 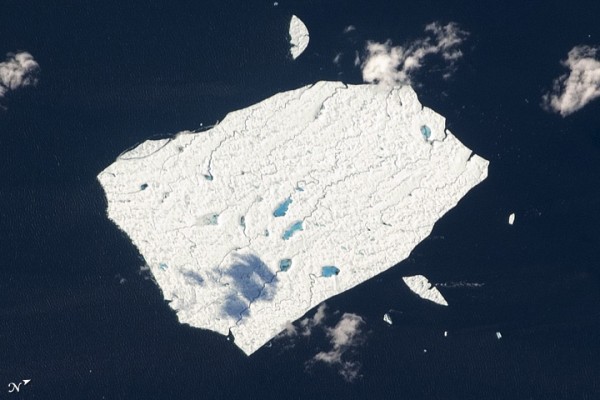 As ice melts on top of the Greenland ice sheet, the melt water forms streams and pools in the depressions on the ice surface. Drawn downslope by gravity—much like streams on a mountainside—water also runs toward the edges of the ice. In some cases, it cracks through it and rushes to the bottom. Such processes appear to be at work on the ice island as well.

August 2011 was a busy month in the life of the ice island, according to the Canadian Ice Service. On August 7, it became grounded on a shoal or shallow seafloor off of St. Anthony, Newfoundland, where it sat for 11 days. By August 18, the ice island broke free and began drifting again, only to split into two large pieces about five days later. The Ice Service last reported on it on August 25. (EarthObservatory)