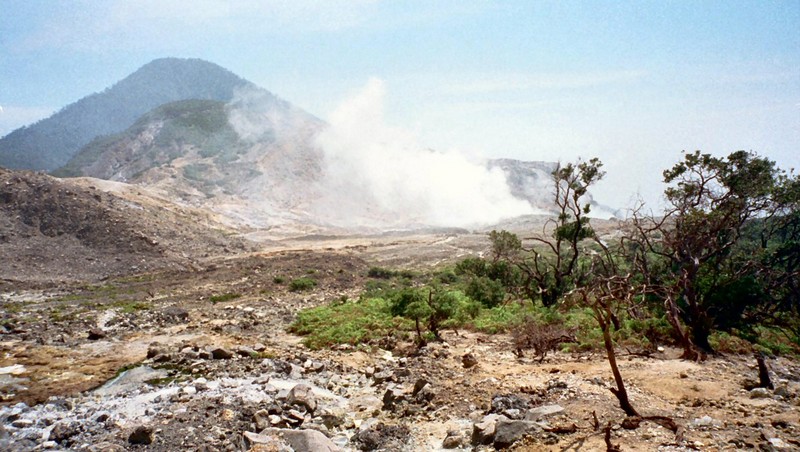 The alert level of Mount Papandayan in Garut, West Java has gone up a notch to alert level 3 — just one level below eruption.

According to the National Disaster Mitigation Agency (BNPB) the 2,665-meter volcano had shown a significant increase in tectonic earthquake activity since Friday. BNPB has dispatched a quick-response team to assess the necessary emergency action local government and other agencies need to take in order to ensure the safety of residents living around the volcano. Mount Papandayan last erupted on November 11, 2002.

Even though there were no deaths or casualties, dozens of houses were destroyed by the lava that swept through the villages within the volcano’s 10km radius. It’s earliest recorded eruption was in 1772 when it destroyed 40 villages and killed 2,951 people. (JakartaGlobe)

​Indonesian officials have warned people to stay more than a mile (two kilometers) from two craters on a smoking volcano spewing noxious gas. Government volcanologist Surono says visitors and villagers have been told to stay away from the yellow craters on the 2,665-meter (8,743-foot) Mount Papandayan. The craters are tourist attractions but are now emitting dangerous hydrogen sulfide. Another danger may come from avalanches on the steep crater cliffs.  Eventual lava flows have a free flow out towards a surrounding valley with a number of villages.

Papandayan is a complex stratovolcano with four large summit craters, the youngest of which was breached to the NE by collapse during a brief eruption in 1772 and contains active fumarole fields. The broad 1.1-km-wide, flat-floored Alun-Alun crater truncates the summit of Papandayan, and Gunung Puntang to the north gives the volcano a twin-peaked appearance. Several episodes of collapse have given the volcano an irregular profile and produced debris avalanches that have impacted lowland areas beyond the volcano. A sulfur-encrusted fumarole field occupies historically active Kawah Mas (“Golden Crater”). (ER)