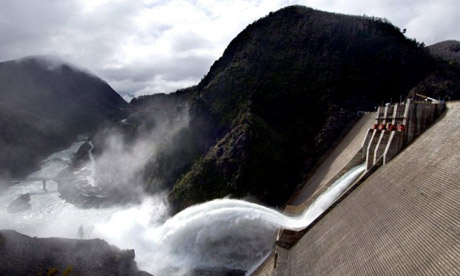 Increasing numbers of Chileans are turning against a government plan to build giant dams in the south, in stark contrasted to muted protests in Brazil over a similar mammoth hydroelectric project there. Unlike Brazil, where government departments deployed influence to silence critics of an Amazonian dam complex that will displace 25,000 indigenous people, Chileans of all persuasions joined forces to oppose the HidroAysen project, which calls for five giant dams to be built on two largely unspoiled rivers of Patagonia, an area noted for its stunning beauty but not easily accessible by land.

Opposition to the project grew throughout Chile in the wake of massive demonstrations protesting the government’s approval earlier in May. An overwhelming majority of Chileans now reject the hydroelectric project, daily newspaper La Tercera reported after conducting an opinion survey. La Tercera said opposition to the project reached 74 percent of those polled. That compared with the 61 percent rejection recorded in polls before the government announced its approval for the project.

Officials argue the complex of dams is vital to ensuring energy security for Chile’s growing economy. Critics say the project is ill-conceived and will create a giant monopoly over Chile’s power grid dominated by the two companies involved, Italy’s Enel/Endesa and Chilean Matt group’s Colbun.

Further protests are likely as details emerge of ambitious plans to build about 1,400 miles of transmission lines. Since the protests began demonstrators have converged on downtown Santiago every day, often swelling to throngs of up to 50,000 people. Police said the resulting riots and clashes with law enforcement agents caused more than $20 million in material damage to shops and establishments.

More demonstrators gathered in central areas of Iquique, Talca, Valparaiso and Concepcion. Pinera and aides argue the dams will ensure Chile’s steady transition to clean energy and eventually replace huge investments in electricity generation plants that use coal and diesel, adding to the country’s carbon footprint. Critics also say traditional hydroelectric projects no longer make economic sense, cause vast ecological damage and will soon be out of date as rapid advances are made in solar and wind power. (TerraDaily) 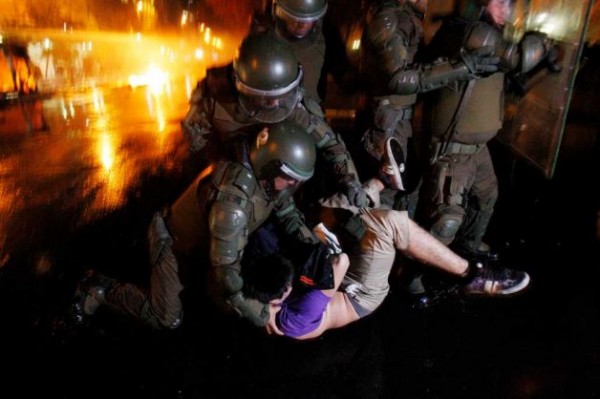 Rio Baker is the most important Chilean river in terms of runoff, with an annual mean discharge of about 1000 m3/s . Glacier Nef is one of the main glaciers feeding Rio Baker. Rio Baker is a critical hydropower resource for Chile. Hidroaysen Project is proposing 5 dams on the Baker and Pascua River generating 2750 MW of power. Glacier Nef retreated 3400 m from 1945-2000, 2400 m retreat of the retreat occurred in the 1994 collapse of the terminus tongue into the proglacial lake, which is now 3.5 km long as seen in the image from Pierre Chevallier IRD. 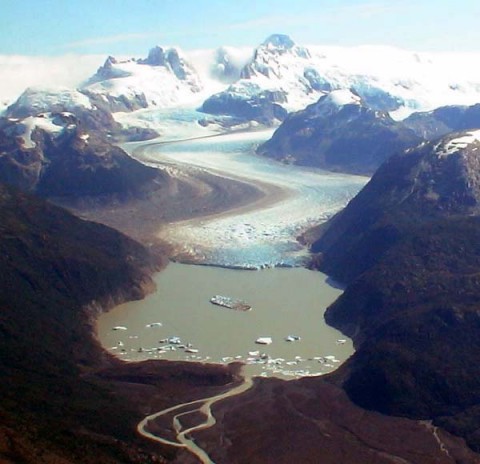 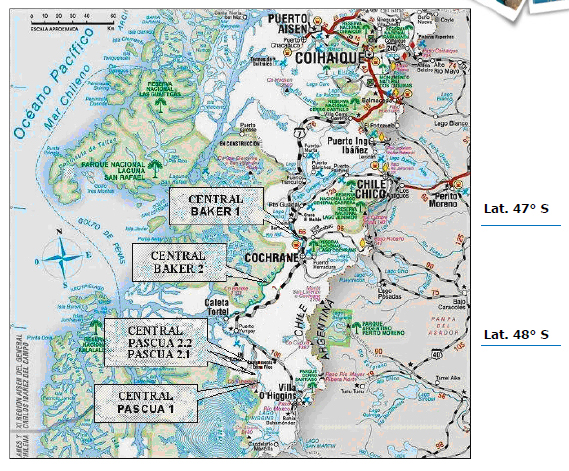 The glaciers feeding Rio Baker remain quite large and will remain a large meltwater source for the forseeable future. The majority of Glacier Nef is above the recent equilibrium line altitude of 1200 m. The section of the Rio Baker below is where one of the dams will go. (GlacierChange)