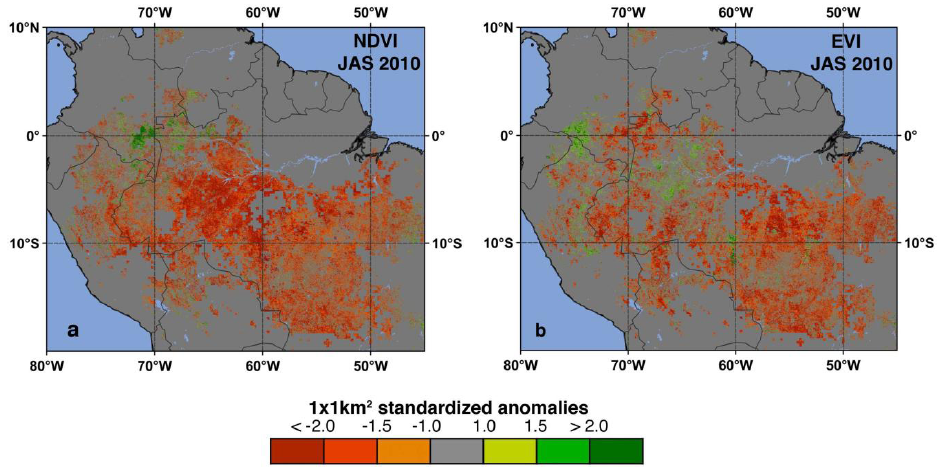 Last year record-breaking drought caused widespread reductions in the greenness of Amazon forests. A new  NASA-based study has revealed that the level of Amazonian vegetation decreased dramatically over an area more than three and one-half times the size of Texas. It didi not recover to normal levels, even after the drought ended in late October 2010.

The drought sensitivity of Amazon rainforests is a subject of intense study. Computer models predict a changing climate with warmer temperatures and altered rainfall patterns could cause moisture stress leading to rainforests being replaced by grasslands or woody savannas. This would release the carbon stored in rotting wood into the atmosphere, which could accelerate global warming. The United Nations’ Intergovernmental Panel on Climate Change has warned similar droughts could be more frequent in the Amazon region in the future. 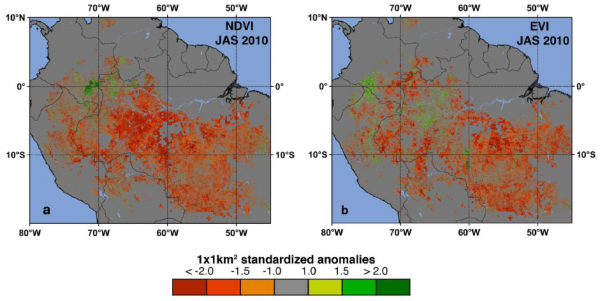 The comprehensive study was prepared by an international team of scientists using more than a decade’s worth of satellite data from NASA’s Moderate Resolution Imaging Spectroradiometer (MODIS) and Tropical Rainfall Measuring Mission (TRMM). Analysis of these data produced detailed maps of vegetation greenness declines from the 2010 drought. The study has been accepted for publication in Geophysical Research Letters, a journal of the American Geophysical Union.

The study shows maps of drought-affected areas using thresholds of below-average rainfall as a guide and identifies affected vegetation using two different greenness indexes as surrogates for green leaf area and physiological functioning. The maps show the 2010 drought reduced the greenness of approximately 965,000 square miles of vegetation in the Amazon – more than four times the area affected by the last severe drought in 2005.

The severity of the 2010 drought also was seen in records of water levels in rivers across the Amazon basin, including the Rio Negro which represents rainfall levels over the entire western Amazon. Water levels started to fall in August 2010, reaching record low levels in late October. Water levels only began to rise with the arrival of rains later that winter.

“Last year was the driest year on record based on 109 years of Rio Negro water level data at the Manaus harbor,” said Marcos Costa, co-author from the Federal University in Vicosa, Brazil. “For comparison, the lowest level during the so-called once-in-a-century drought in 2005 was only eighth lowest.“

The reports of a severe drought began to appear in the news media last summer, the authors started near-real time processing of massive amounts of satellite data. They used a new capability, the NASA Earth Exchange (NEX), built for the NASA Advanced Supercomputer facility at the agency’s Ames Research Center in Moffett Field, Calif. NEX is a collaborative supercomputing environment that brings together data, models and computing resources. 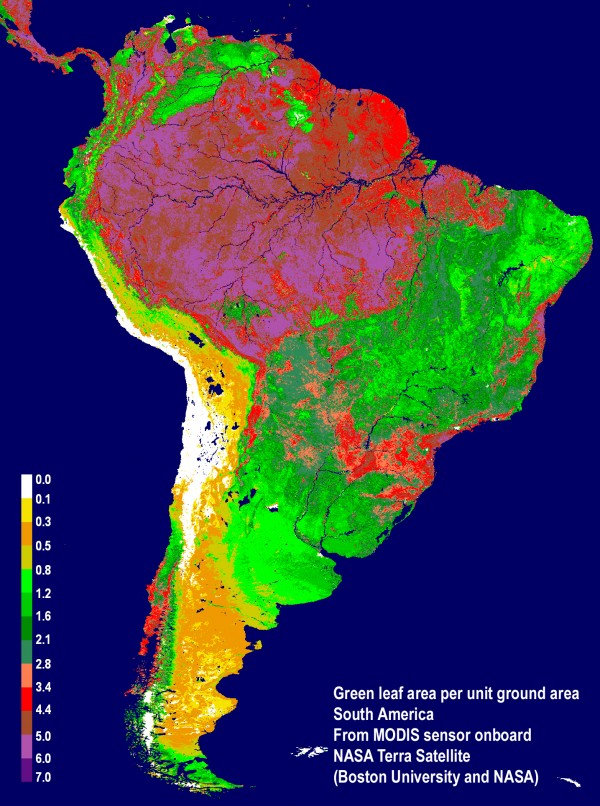 With NEX, the study’s authors quickly obtained a large-scale view of the impact of the drought on the Amazon forests and were able to complete the analysis by January 2011. Similar reports about the impact of the 2005 drought were published about two years after the fact.  An article about the NEX project appears in this week’s issue of Eos, the weekly newspaper of the American Geophysical Union.