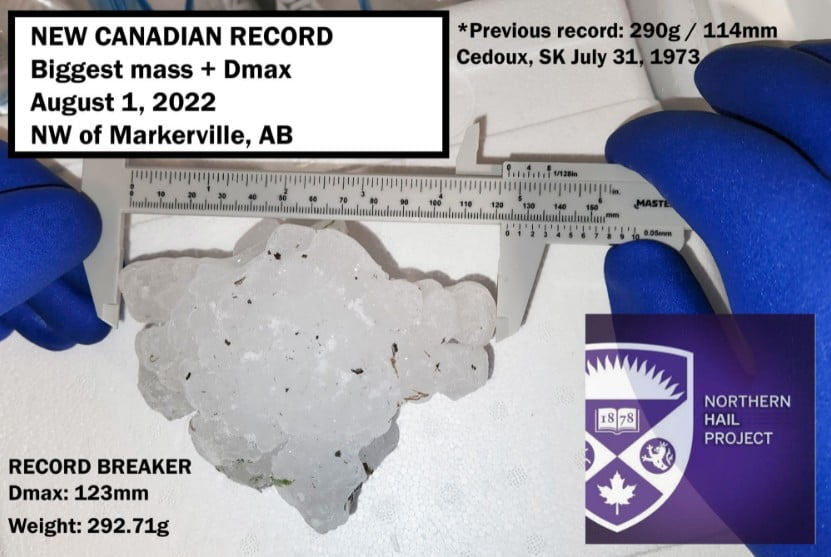 A giant hailstone was found near Markerville, Alberta on Monday, August 1, 2022, setting a new record for the largest recorded hailstone in Canada.

The record-breaker, measuring 123 mm (4.84 inches) in diameter and weighing 292.71 g (10.32 ounces), was found near the hamlet of Markerville by a team from the Northern Hail Project (NHP) led by Francis Lavigne-Theriault.

The team followed a storm to Markerville (about 35 km / 21.7 miles) southwest of Red Deer, Alberta) and found several baseball-sized hailstones.

The team traveled farther south and approximately 20 minutes after the storm had passed (18:14 MDT) and recovered several larger hailstones under a tree canopy, many of which were grapefruit to softball-size including the record breaker.

Lavigne-Theriault and the team ultimately collected seven bags at the aforementioned location, all of which are baseball-sized hail or larger (at least 70 mm /2.75 inches in diameter). The samples are currently being stored in a freezer.

“It wasn’t until I returned and started sifting through the bags that I found the record-breaking stone,” said Lavigne-Theriault. “It was bagged with other stones without realizing what we had in our possession!”

NHP executive director Julian Brimelow and some of his severe weather colleagues from around the world maintain a database of record hailstones. Currently, only 22 hailstones, including the Markerville one, have weighed more than 290 g (10.22 ounces).

Because giant hailstones are so rare, the international research community does not have a good understanding yet of what conditions are required for hailstorms to produce them.

“Every new data point helps inform us on what conditions are required,” said Brimelow. “Once we have measured and 3D-scanned the Markerville hailstone, we can then make thin sections. The growth layers evident in those will reveal information on the hailstone’s growth history in the storm.”

The researchers can also use ice from the different layers for chemical and isotope analyses to also help them understand the hailstone’s journey through the storm.

3D scans of the stone can also be used to make silicon molds or 3D prints that the NHP team can use to make ice replicas for conducting experiments to study fall behavior and aerodynamics of these giant hailstones.

“By any measure, Monday’s storm was remarkable,” said Brimelow. “If you were to ask experts where in Canada a new record largest hailstone would be found, they would probably say Saskatchewan. We were expecting significant severe hail in Alberta on Monday, but not a new national record.”

For comparison, the current record holder for the largest hailstone in North America is a stone that fell near Vivian, South Dakota on July 23, 2010. That stone weighed 879 g (31 ounces) and had a maximum diameter of 203 mm (7.99 inches).