Tropical Cyclone "Tiffany" formed in the Coral Sea on January 9, 2022, as the 5th named storm of the 2021/22 Australian region cyclone season. Tiffany is expected to bring damaging to destructive winds and heavy rain to communities in far north Queensland from the morning of January 10, 2022 (LT). Parts of Queensland already saw major flooding this week after prolonged heavy rainfall brought by Ex-Tropical Cyclone "Seth" described by BOM as incredibly rare. 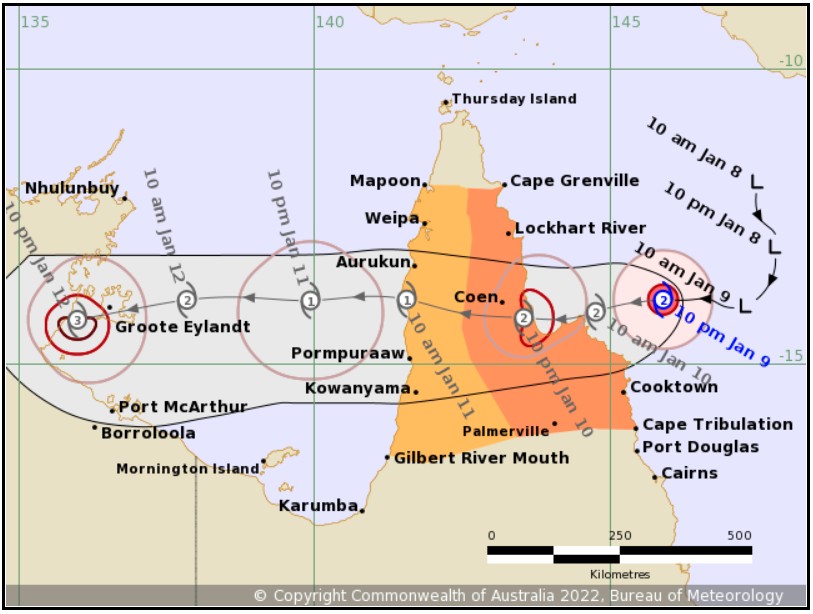 The cyclone continues to strengthen as it approaches the far north Queensland coast.

Landfall is expected between Cooktown and Lockhart River, with the timing dependent on whether Tiffany moves south or north of Cape Melville, BOM said.

Tiffany will weaken slightly over land but may maintain tropical cyclone strength as it moves westward across the Cape.

The system is then expected to move into the Gulf of Carpentaria on Tuesday and re-intensify quickly as it moves towards the Northern Territory coast.

A severe tropical cyclone coastal impact on the Northern Territory coast is possible on Wednesday, January 12 or Thursday, January 13.

Gales with gusts to 110 km/h (68 mph) will develop between Cape Tribulation and Coen, including Cooktown, early Monday as Tiffany approaches the coast. These gales may extend north to Lockhart River and Cape Grenville if the cyclone takes a more northerly track.

Destructive wind gusts to 130 km/h (80 mph) are expected later on Monday as the center of the cyclone makes landfall.

Gales with gusts to 100 km/h (60 mph) may extend westward across the Cape York Peninsula between Gilbert River Mouth and Mapoon, including Weipa, and Pormpuraaw, on Tuesday.

Heavy rainfall is occurring in the warning area (Gilbert River Mouth to Mapoon and Cape Grenville to Cape Tribulation) and is expected to persist through Monday and into Tuesday as the system moves across Cape York Peninsula. Widespread 24-hour totals of 100 to 150 mm (4 – 5.9 inches) are expected, with isolated 24-hour totals of 200 to 250 mm (7.9 – 9.8 inches) possible. 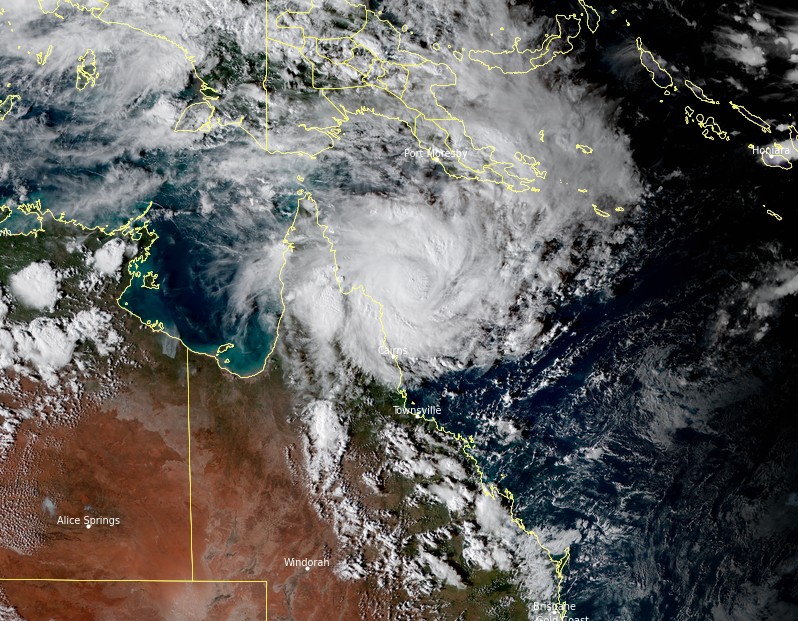 Parts of Queensland have already experienced flooding over the past couple of days after prolonged heavy rain brought by stalled Ex-Tropical Cyclone "Seth."

One person drowned after his vehicle became submerged in floodwaters at Kanigan.

Police had been called to rescue 23 people in 11 vehicles. Eight of those were found safe yesterday, but the remaining 15 people were unaccounted for with rescue crews unable to access many areas.

BOM spokesman said this was extremely rare event as storms rarely sit in the same region for such a long period of time.

"This was incredibly rare," the spokesperson said. "The magnitude of what we saw really escalated during the night. It was a really evolving situation."