At 15:00 UTC (23:00 Philippine Standard Time) on September 6, the Japan Meteorological Agency (JMA) upgraded it to a Severe Tropical Storm.

According to the Philippine Atmospheric, Geophysical and Astronomical Services Administration (PAGASA), the system rapidly intensified into a typhoon at that time and made its first landfall in Hernani, Eastern Samar with maximum sustained winds of 120 km/h (75 mph) near the center, and gusts of up to 150 km/h (95 mph). It was moving WNW at 15 km/h (9 mph).

Moderate to heavy with at times intense rains are expected over Mindoro Provinces and the rest of CALABARZON and Visayas.

Under these conditions, scattered to widespread flooding (including flash floods) and rain-induced landslides are possible especially in areas that are highly or very highly susceptible to these hazard as identified in hazard maps. 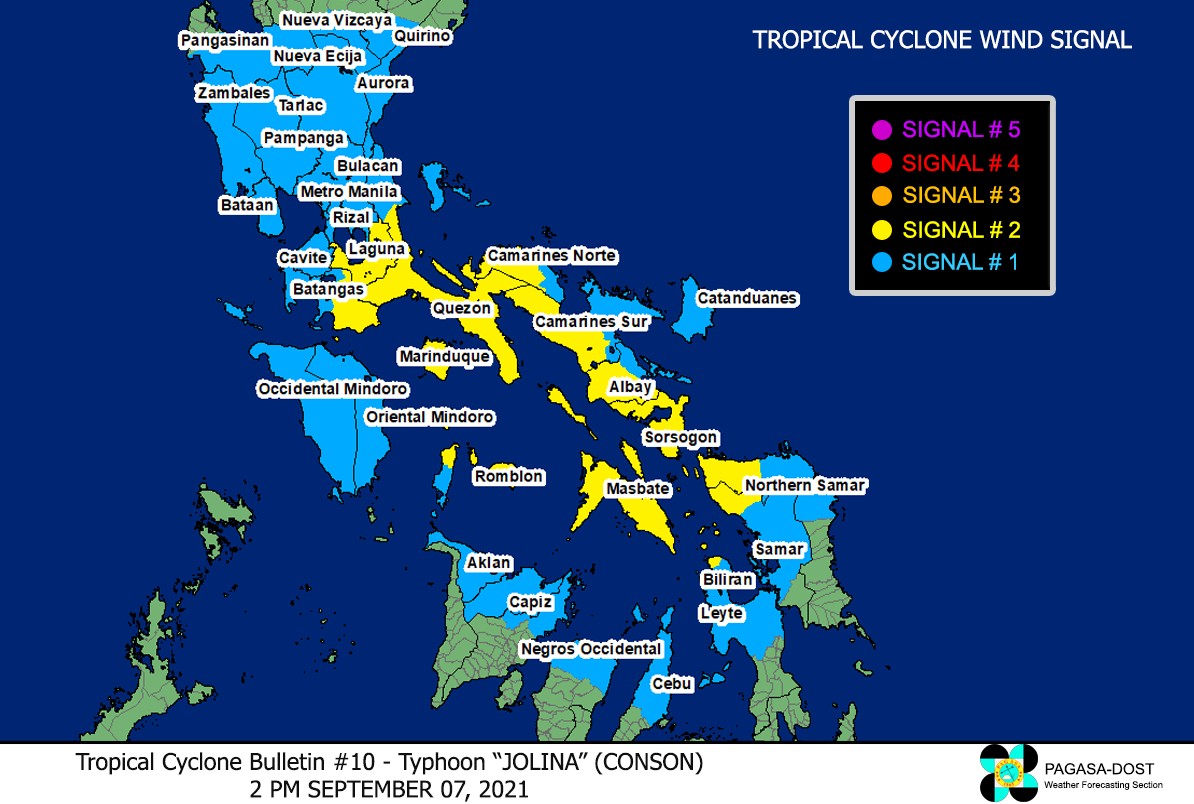 Damaging gale-force to storm-force winds are likely to occur within any of the areas where TCWS #2 is in effect. This may bring generally light to moderate damage to structures and vegetation.

Strong winds (strong breeze to near gale conditions) with occasional gusts will be experienced in areas where Tropical Cyclone Wind Signal (TCWS) #1 is in effect. This may result with up to very light damage to structures and vegetation.

The threat of coastal inundation due to storm surge of up to 0.5 – 1 m (1.6 – 3.3 feet) continues for several coastal localities of Biliran, Sorsogon, Samar, and Masbate which may pose threat to life and property. In addition, coastal areas of localities under TCWS, especially those at #2 and #3 may experience coastal flooding due to hazardous surf conditions.

The system will bring rough to very rough seas (2.5 to 5 m / 8 to 16 feet) over the seaboards of areas where TCWS #2 and #3 are in effect. Sea travel is risky for all types of seacrafts over these waters. Mariners without the proper experience should immediately seek safe harbor.

Moderate to rough seas (1.2 to 2.8 m / 4 – 9 feet) will be experienced over the seaboards of areas where TCWS #1 is in effect, the remaining seaboards of Visayas, and the northern eastern seaboards of Mindanao.

Mariners of small seacrafts are advised to take precautionary measures when venturing out to sea. Inexperienced mariners should avoid navigating in these conditions. 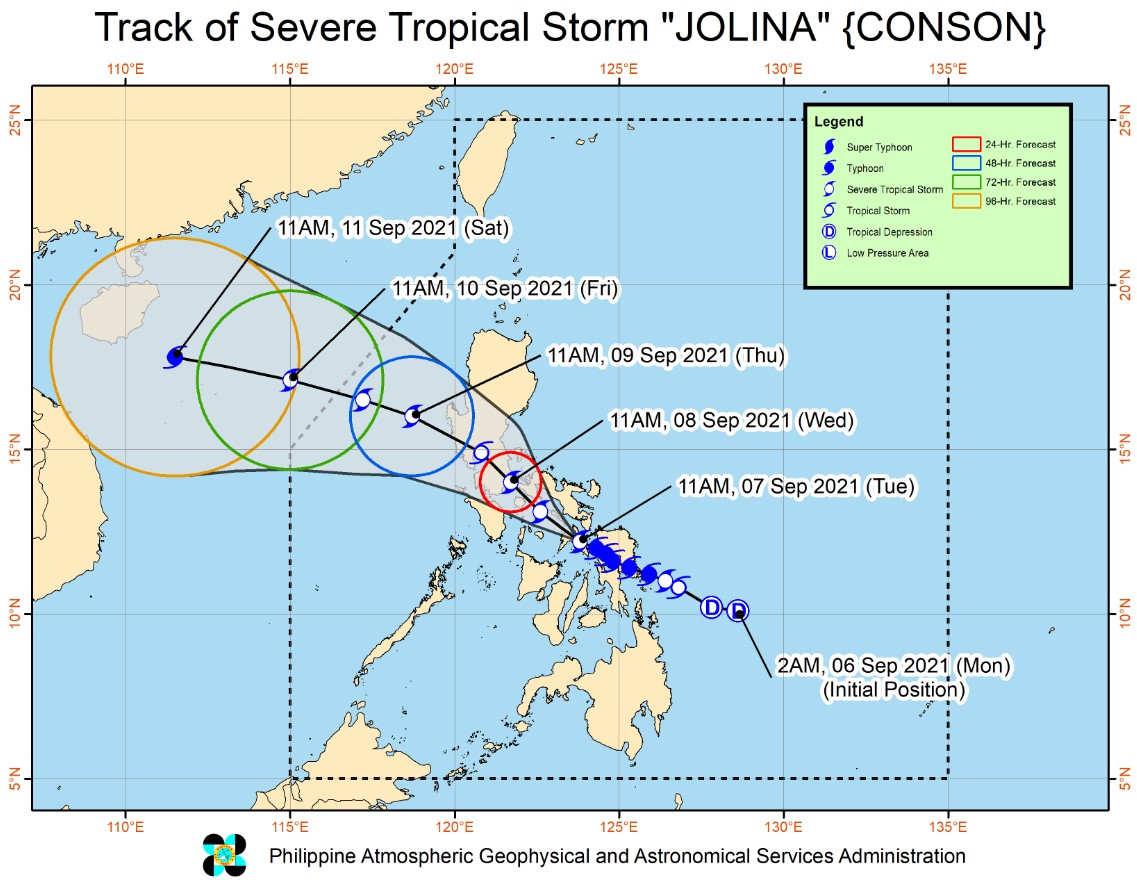 In the next 12 hours, it is expected to continue moving generally WNW traversing Masbate and Ragay Gulf before making another landfall in the vicinity of southeastern Quezon tonight or tomorrow early morning (LT).

Throughout the remainder of tomorrow and into Thursday morning, the tropical cyclone is forecast to cross Central Luzon (roughly to the east and north of Metro Manila).

Frictional effects during its traverse of Luzon landmass will weaken the system down to tropical storm category.

The storm is forecast to emerge over the West Philippine Sea before 04:00 UTC on September 9.

Re-intensification is forecast to occur beginning on Thursday afternoon as the tropical cyclone moves WNW over the West Philippine Sea towards the southern China – northern Vietnam area. 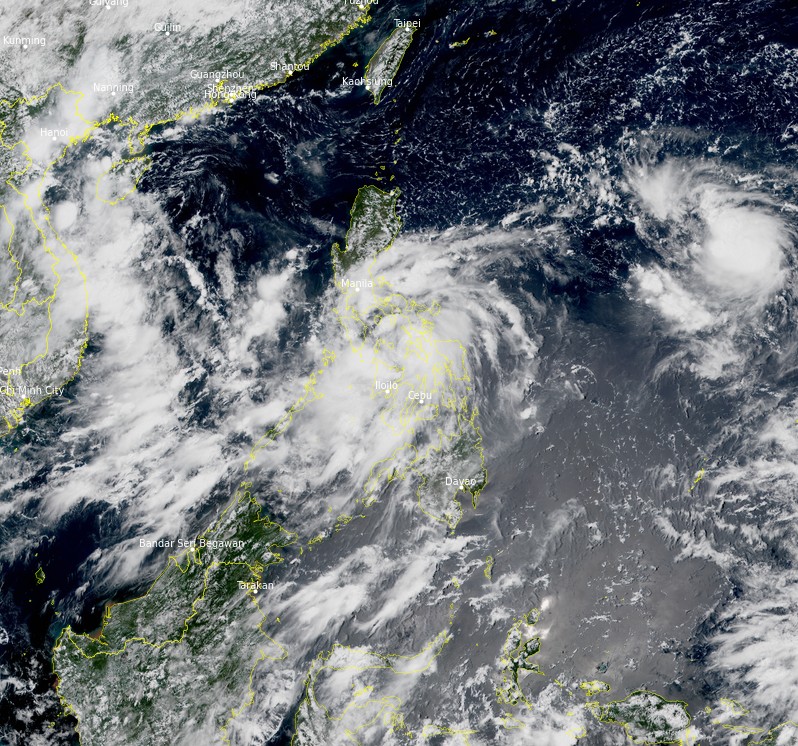 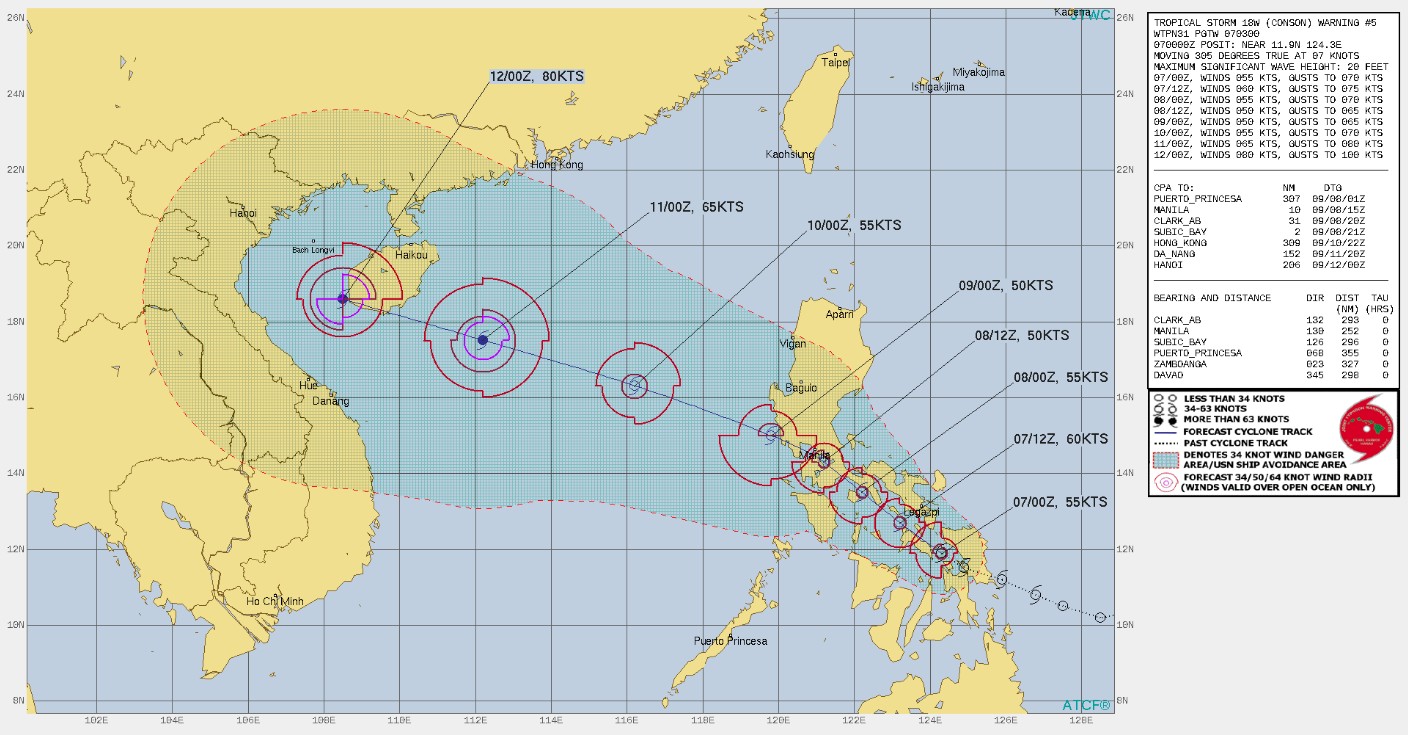 Meanwhile, another tropical cyclone — Chanthu — formed east of the Philippines as Conson approached the coastline.

The current forecast track takes it north of the Philippines while intensifying and possibly into southern Taiwan and China on September 12. 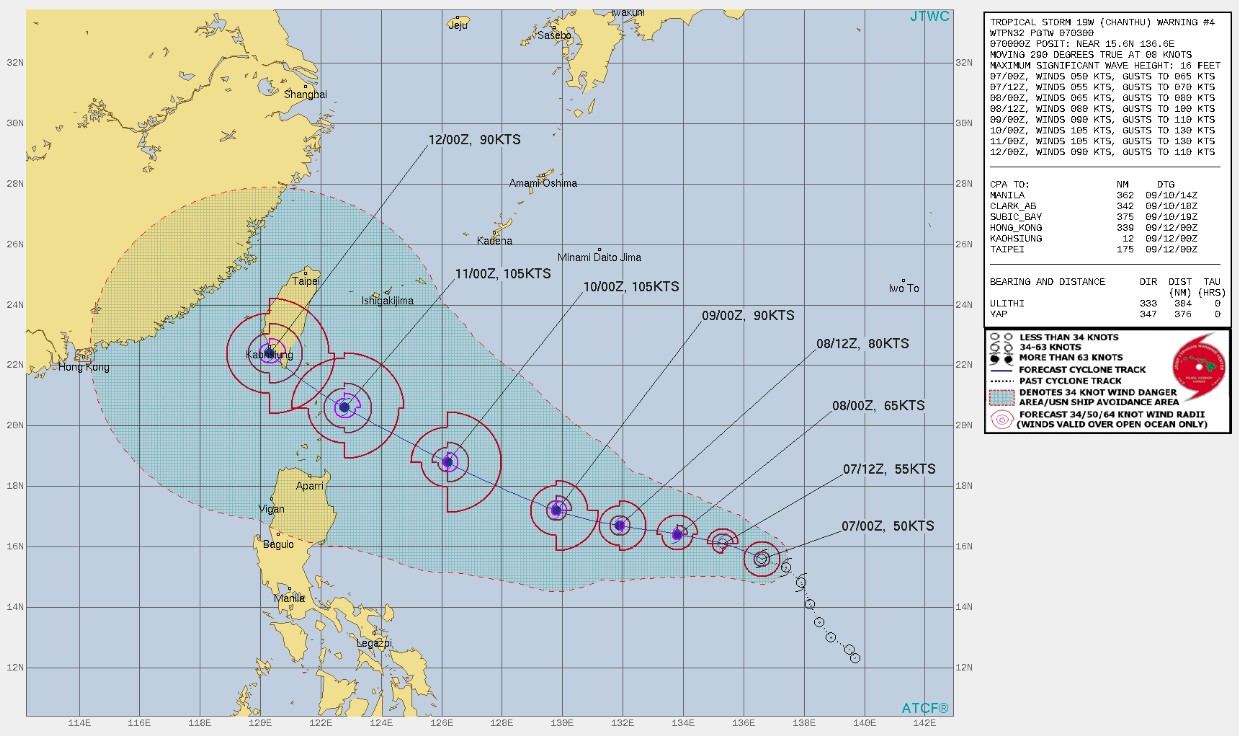