A large, slow-slip earthquake is occurring off the east coast of North Island, New Zealand. The event began off the coast of Porangahau last week in the same area as the one that occurred shortly after the massive M7.8 Kaikoura Earthquake of November 2016. Based on past events there, the event might last for a week or two.

Dr. Laura Wallace of GNS Science said the location of the current slow slip event offshore Porangahau is in the same place that they've seen slow-slip events before, and they appear to occur in that area approximately every five years.

"The event has so far caused about 2 cm (0.8 inches) of eastward displacement to 3 continuously-operating GNSS sites near the slow earthquake," Wallace said.

"Past slow slip events in this area have involved movement on the plate boundary equivalent to that which occurs in magnitude 6.5 to 7.0 earthquakes, and this one looks like it is shaping up to be similar to previous slow slip events observed near Porangahau." 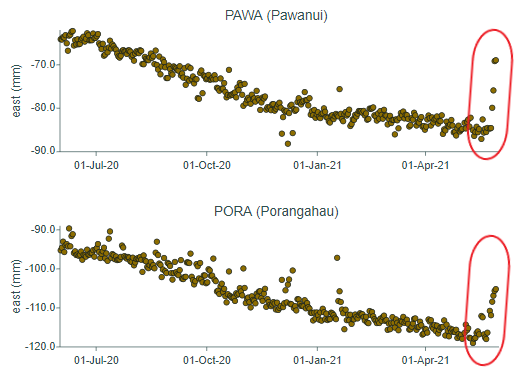 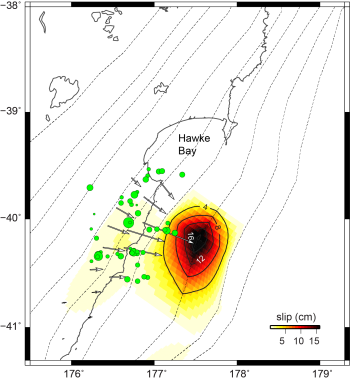 Luckily, GNS scientists can now make a better analysis of the event taking place as, for the first time ever, they have a network of 26 sensors offshore the Porangahu.

"This is the first time that we have had offshore sensors in-place and recording during a Porangahau slow slip event, so it will be very exciting to see that data when we return to retrieve the instruments later this year," Wallace told the NZ Herald.

"Our team also deployed several additional seismometers in the area a few months ago, to be able to detect small earthquakes that tend to occur during these slow slip events." 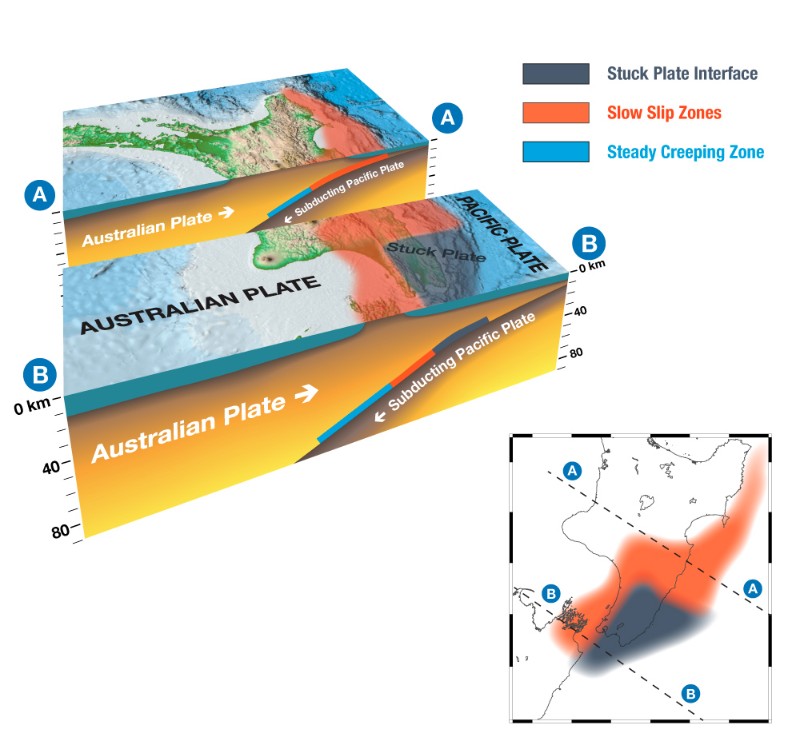 Cross-section of the slow-slip zones at the boundary between the Australian and Pacific Plates. Slow slips in the south (Kapiti and Manawatu) happen deeper than those in the north (Hawke's Bay and Gisborne. Image credit: GNS Science

Dozens of slow-slip events (also known as "silent" earthquakes) have been detected in New Zealand since 2002. They occur up to 60 km (37 miles) below the earth’s surface where the Pacific Plate meets the Australian Plate, along the Hikurangi Subduction Zone (marked by the orange zone on the image below).

Slow-slip events can move faults the equivalent of magnitude 6+ earthquakes over a period of weeks to months.

Movements caused by these slow-slip events are so slow that they are undetectable by both humans and GeoNet's seismographs.

GeoNet, in partnership with LINZ run a network of GPS stations around the country that are able to detect land movement as little as a few millimeters resulting from slow-slip events.