There is a LAND and MARINE TSUNAMI THREAT.

The first waves may reach New Zealand in the areas around Lottin Point at approximately 09:49 am NZDT (20:49 UTC, March 4). Tsunami activity will continue for several hours and the threat must be regarded as real until the warning is canceled, NEMA said.

"Evacuation advice overrides the current COVID-19 Alert Level requirements. Listen to local Civil Defence authorities and follow any instructions. If you are told to evacuate do not stay at home. Stay 2 m [6.5 feet] away from others if you can and if it is safe to do so." 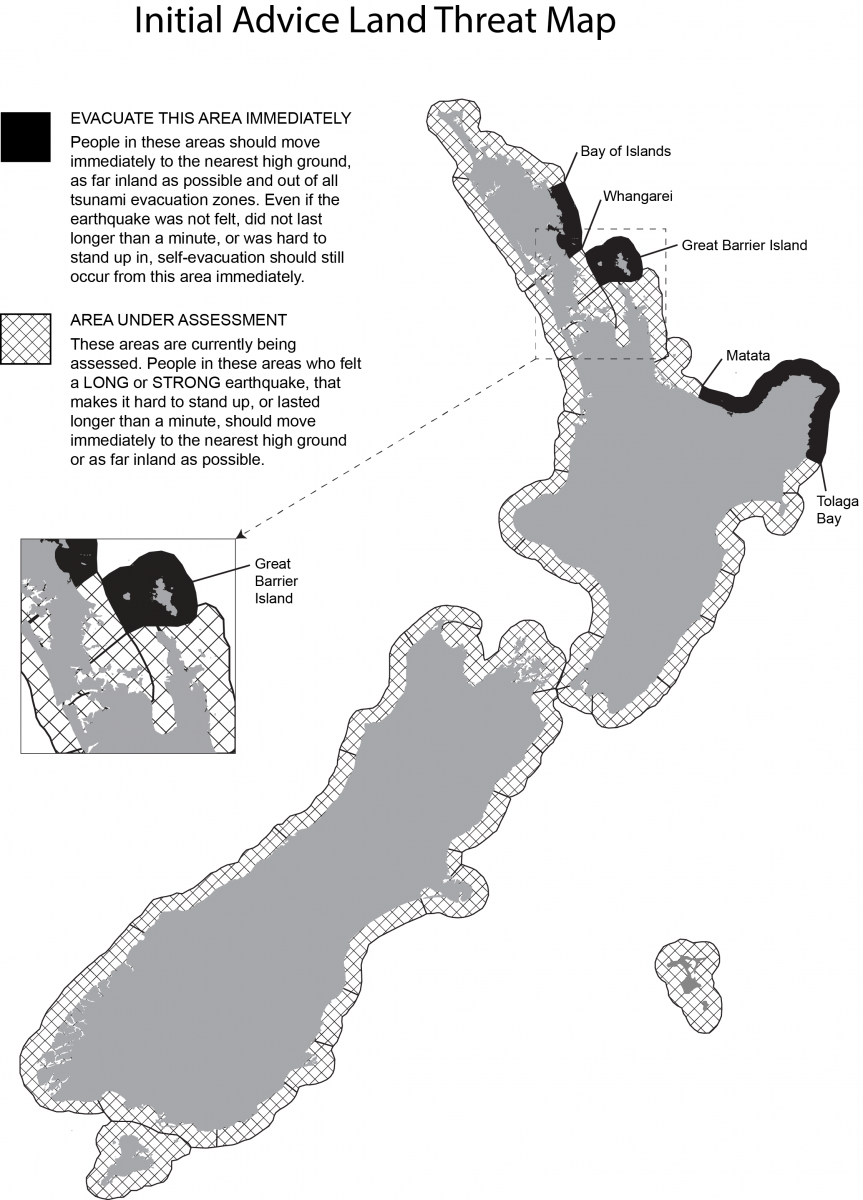 This is a Tsunami Warning for New Zealand coastal areas following the magnitude 8.1 earthquake near KERMADEC ISLANDS REGION.

AREAS UNDER LAND AND MARINE WARNING:

Coastal inundation (flooding of land areas) is expected in the following areas:

The West Coast of the North Island from CAPE REINGA to AHIPARA.

The East Coast of the North Island from CAPE REINGA to WHANGAREI, from MATATA to TOLAGA BAY including Whakatane and Opotiki.

Strong and unusual currents and unpredictable surges near the shore are expected in the following areas. This means a threat to beach, harbour, estuary and small boat activities.

The East Coast of the North Island from WHANGAREI to MATATA including Whangarei, the East Coast of Auckland, Waiheke Island, Waitemata Harbour and Tauranga, from TOLAGA BAY to LAKE FERRY including Gisborne and Napier.

The West and South Coasts of the South Island from FAREWELL SPIT to PUYSEGUR POINT including Westport, Greymouth and Hokitika.

The top of the South Island from FAREWELL SPIT to PORT UNDERWOOD including Nelson, Picton and the Marlborough Sounds.

The East and South Coasts of the South Island from the WAIPARA RIVER to the RAKAIA RIVER including Christchurch and Banks Peninsula, from the TAIERI RIVER to PUYSEGUR POINT including Invercargill.

And the CHATHAM ISLANDS.

There is no tsunami threat in all other areas.

The first waves may reach New Zealand in the areas around Lottin Point at approximately 9:49am New Zealand Daylight Time.

The severity of currents and surges will vary within a particular coastal area and over the period this warning is in effect.

The first wave may not be the largest. Tsunami activity will continue for several hours and the threat must be regarded as real until this warning is cancelled.

People in all New Zealand coastal areas should:

Evacuation advice overrides the current COVID-19 Alert Level requirements. Listen to local Civil Defence authorities and follow any instructions regarding evacuation of your area. If you are told to evacuate do not stay at home. Stay 2 metres away from others if you can and if it is safe to do so.

This warning will remain in effect until a cancellation message is issued by the National Emergency Management Agency. 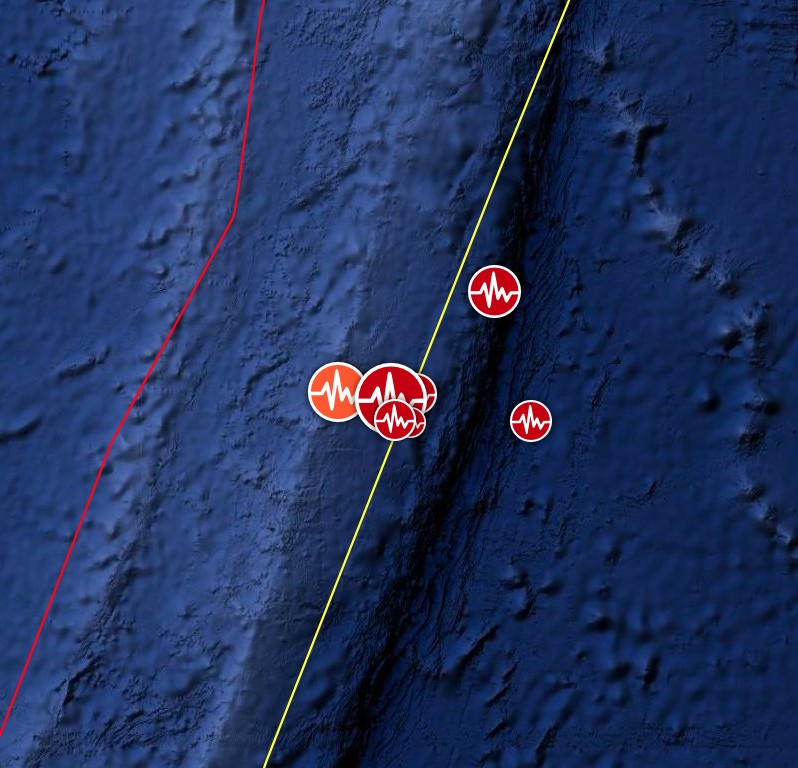 Persons located in threatened coastal areas should stay alert for information and follow instructions from national and local authorities. 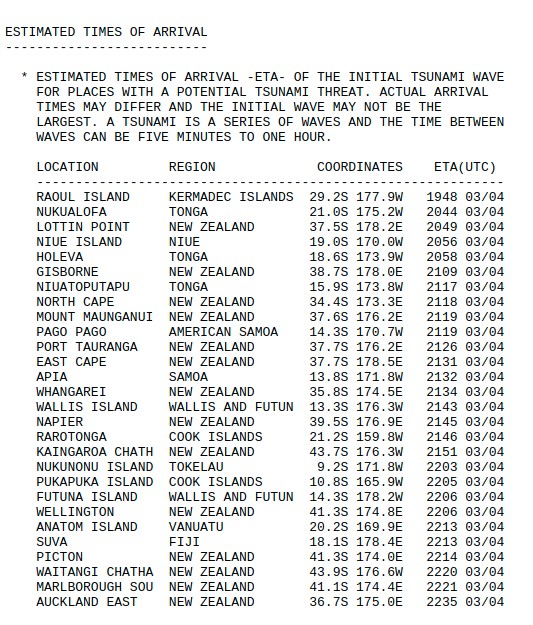 The earthquake occurred as the result of reverse faulting in the Tonga-Kermadec subduction zone at a depth of ~22 km (14 miles), the USGS said.

The Tonga-Kermadec subduction zone extends north-northeast from the North Island of New Zealand for more than 2 500 km (1 550 miles) through Tonga to within 100 km (62 miles) of Samoa.

Focal mechanism solutions for the event indicate rupture occurred as a result of reverse faulting, either by low angle thrust motion on a west-dipping fault or by high angle reverse motion on an east-dipping fault.

The location, depth, and style of faulting are consistent with the earthquake having occurred on or near the west-dipping subducting plate interface between the Pacific and Australia plates.

The proximity and timing of the two events indicates that the M7.4 was likely a foreshock of the M8.1 earthquake.

Additionally, a M7.3 oblique reverse faulting earthquake occurred ~6 hours prior to the M7.8 and ~900 km (560 miles) to the south. However, the spatial and temporal gap between these earthquakes likely indicates that static stress changes induced by the earlier M7.3 did not directly cause the M7.4 or M 8.1 earthquakes, according to the USGS.

The M8.1 earthquake is the strongest earthquake to hit anywhere in the world since M8.2 near Fiji on August 19, 2018. 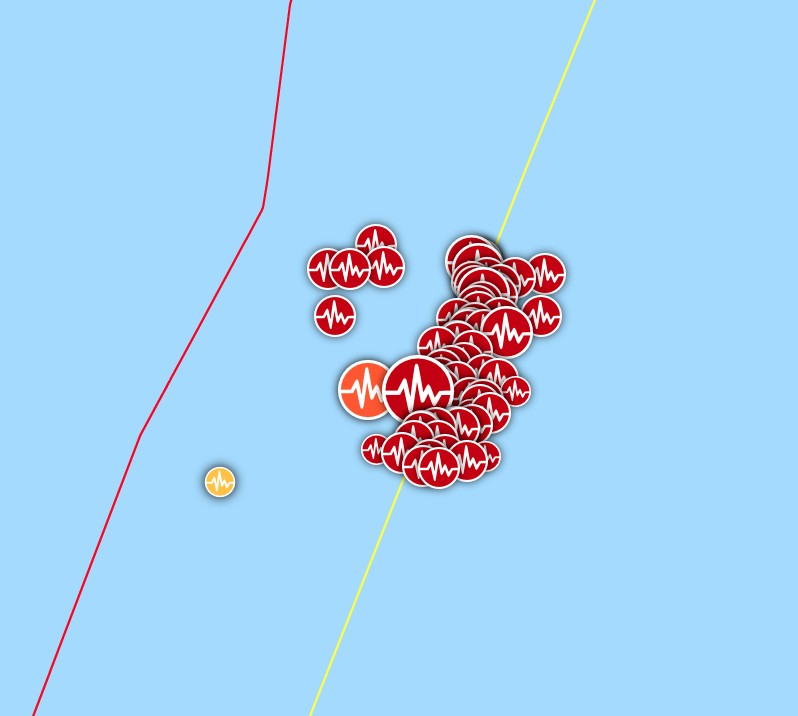