SERNAGEOMIN has raised the technical alert for Laguna del Maule Volcanic Complex from Green to Yellow on February 22, 2021, after an increased number of earthquakes detected over the past two weeks.

The Southern Andes Volcanological Observatory (OVDAS) detected 533 volcano-tectonic (VT) earthquakes, commonly associated with a rock fracture within the volcanic system, and deformation rate of 2.3 cm (0.9 inches) over the past 30 days at the station closest to the center of deformation. This rate is higher than the average registered since 2012.

The highest horizontal displacement rate was estimated at 1.4 cm (0.5 inches) at the NIEB station, southwest of the maximum deformation.

Seismic events of the volcano-tectonic type have been observed to have been persistent in time and have increased in energy.

The seismicity continues to be located close to the area where CO2 anomalies have been detected over the past year.

A hazard zone with a radius of 2 km (1.2 miles) was reported around the site of the CO2 anomaly, and residents/tourists urged not to access it.

The alert level for the Laguna del Maule Volcanic Complex was raised to Yellow on June 18, 2020 and lowered back to Green on November 8. 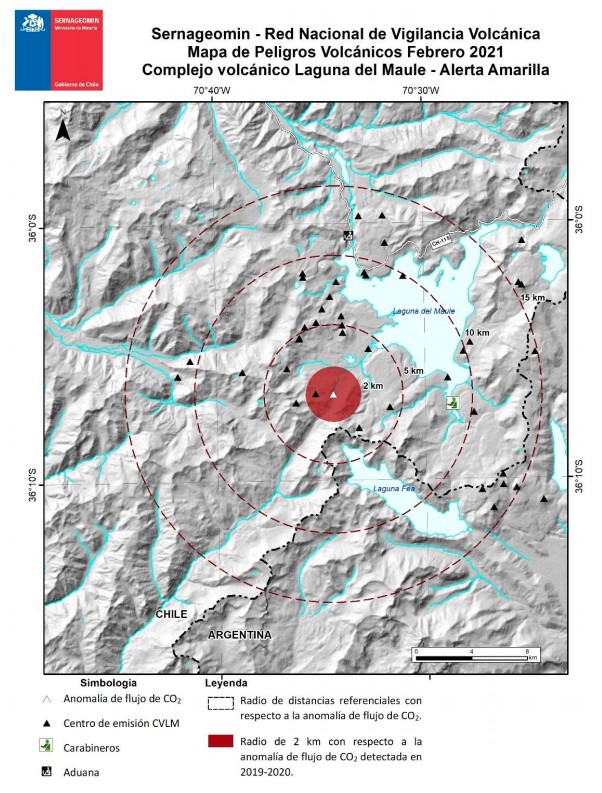 The 15 x 25 km (9 x 15 miles) wide Laguna del Maule caldera contains a cluster of small stratovolcanoes, lava domes, and pyroclastic cones of Pleistocene-to-Holocene age. The caldera lies mostly on the Chilean side of the border, but partially extends into Argentina.

A cluster of Pleistocene cinder cones was constructed on the NW side of the Maule lake, which occupies part of the northern portion of the caldera. The latest activity produced an explosion crater on the E side of the lake and a series of Holocene rhyolitic lava domes and blocky lava flows that surround it. (GVP)