Researchers at the European Center for Medium-range Weather Forecasts and TU Freiberg developed a new framework to improve forecasting of extreme rainfall events in Mediterranean countries. The scientists noted that it was challenging to predict how many days in advance, when, and where exactly heavy rain will occur in the region.

Countries around the Mediterranean region are frequently affected by extreme rainfall events, which can have devastating consequences for economies and societies.

"It is, however, extremely challenging to forecast many days in advance when and where exactly heavy rainfall will occur. Thus, researchers strive to develop new tools to better predict extreme weather phenomena allowing for early warnings and adequate mitigation strategies," explained lead author Nikolaos Mastrantonas.

The researchers studied whether data from 1979 to the present, grouping the daily weather into nine patterns of distinct atmospheric characteristics over the region.

The findings show that there is a strong relationship between the location of the extreme weather event and the nine patterns.

"We can now use the data to come up with a model that will help to better predict extreme rain in the Mediterranean," said Professor Jörg Matschullat of TU Bergakademie Freiberg, who supervises Mastrantonas' Ph.D.

"When it comes to climate, the Mediterranean Sea is a particularly interesting region as it is surrounded by large continents and mountain ranges. The regional climate of the area is also dependent on large-scale patterns over the Atlantic Ocean, the Balkans, and the Black Sea."

The nine patterns are associated with unstable low-pressure systems such as cut-off lows and troughs, or with stable anticyclonic conditions, like ridges, spreading over hundreds of kilometers. 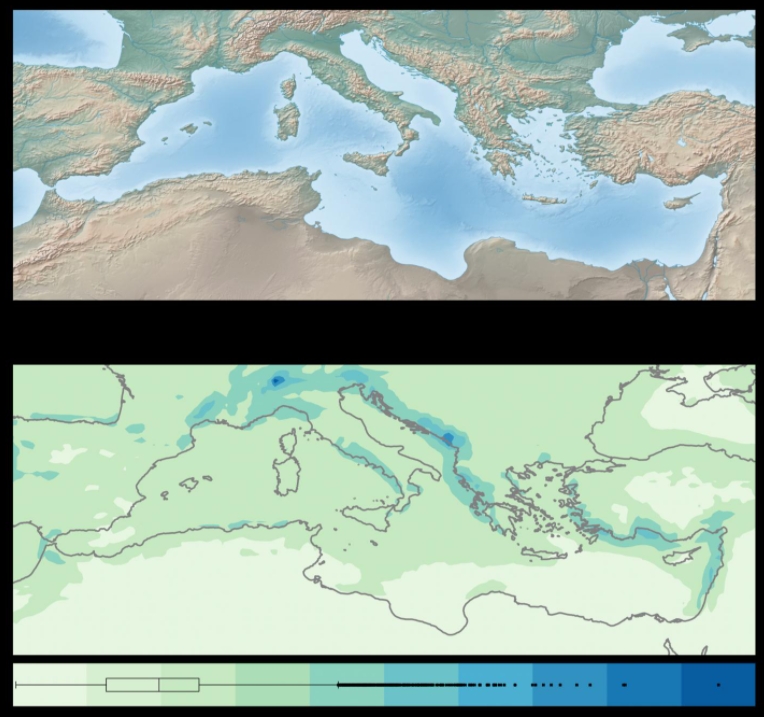 "Such conditions lead to extreme precipitation events at different subregions of the Mediterranean," said Mastrantonas.

For instance, a low-pressure system centered over the Bay of Biscay raises the possibility of extreme rainfall over mountainous and coastal regions in Spain, Morocco, Italy, and the West Balkansmore than sixfold.

The team also discovered that mountains create a strong link between distant areas. For example, in Central-Western Italy, three in every 10 extremes occur simultaneously with extremes over Montenegro and Croatia.

"This is a result of the Apennines that block a substantial part of the airflow, and frequently force the moisture to precipitate in the western part of Italy, and on the same day over Croatia," the lead author added.

Professor Matschullat clarifies, "As the next step of this work, we will quantify how reliable the state-of-the-art weather forecasting models are in predicting the identified nine patterns."

"Our intention is to incorporate such information into new forecasting products informing about extreme weather over the Mediterranean at sub-seasonal scales."

The Mediterranean region is strongly affected by extreme precipitation events (EPEs), sometimes leading to severe negative impacts on society, economy, and the environment. Understanding such natural hazards and their drivers is essential to mitigate related risks. Here, EPEs over the Mediterranean between 1979 and 2019 are analysed, using ERA5, the latest reanalysis dataset from ECMWF. EPEs are determined based on the 99th percentile of their daily distribution (P99). The different EPE characteristics are assessed, based on seasonality and spatiotemporal dependencies. To better understand their connection to large‐scale atmospheric flow patterns, Empirical Orthogonal Function analysis and subsequent non‐hierarchical K‐means clustering are used to quantify the importance of weather regimes to EPE frequency. The analysis is performed for different variables, depicting atmospheric variability in the lower and middle troposphere. Results show a clear spatial division in EPE occurrence, with winter and autumn being the seasons of highest EPE frequency for the eastern and western Mediterranean, respectively. There is a high degree of temporal dependencies with 20% of the EPEs (median value based on all studied grid cells), occurring up to 1 week after a preceding P99 event at the same location. Local orography is a key modulator of the spatiotemporal connections and substantially enhances the probability of co‐occurrence of EPEs even for distant locations. The clustering clearly demonstrates the prevalence of distinct synoptic‐scale atmospheric conditions during the occurrence of EPEs for different locations within the region. Results indicate that clustering, based on a combination of sea level pressure (SLP) and geopotential height at 500 hPa (Z500), can increase the conditional probability of EPEs by more than three (3) times (median value for all grid cells) from the nominal probability of 1% for the P99 EPEs. Such strong spatiotemporal dependencies and connections to large‐scale patterns can support extended‐range forecasts.