As a cold arctic air mass remains in place across much of the United States, wintry precipitation will bring hazards to the Pacific Northwest, the Southern Plains, Mississippi Valley into the Ohio Valley, and the Mid-Atlantic to Northeast this weekend into at least early next week. Temperatures will remain 11 – 22 °C (20 to 40 °F) below normal across the center of the country on Saturday, February 13, 2021.

A very active weekend is ahead for winter weather as large parts of the U.S. experience concerns for extremely cold temperatures, heavy snow, and ice. Coast to coast from the Pacific Northwest to the Mid-Atlantic, there is an array of winter weather headlines in effect.

Nearly 300 new daily temperature records could be set from Canada to Texas over the weekend and into the next week, said Marc Chenard, a senior forecaster at the NWS Weather Prediction Center.

Along with hazardous travel and extremely low temperatures, local media report natural gas pipes and processing plants are shutting down, disrupting the output of the heating fuel.

Texas officials are reporting record power demand and a surge in electricity price as well as prices for gas, propane and heating oil.

The reason is not just elevated demand but also 'freeze-offs' — when wells shut down due to liquids freezing inside pipelines.

According to Chenard, the country can expect a mix of ultra-cold lows, with high temperatures that struggle to be anything but frigid.

"It's going to be a mess," NWS Fort Worth meteorologist Jason Dunn said. "This is extremely unusual. I would go as far as to say that it could be a historic event."

Referring to a massive pileup crash involving 130 vehicles near Fort Worth on February 11, Dunn said people there are just not used to it. "They are not used to driving on it and add in the bitter cold and they are just not prepared for it. The travel will become life-threatening."

"We need your help to share this information with all your friends and family! The time to get ready is today. Conditions will start to deteriorate Saturday night thru next week, with single-digit temperatures Monday night," NWS Fort Worth said. 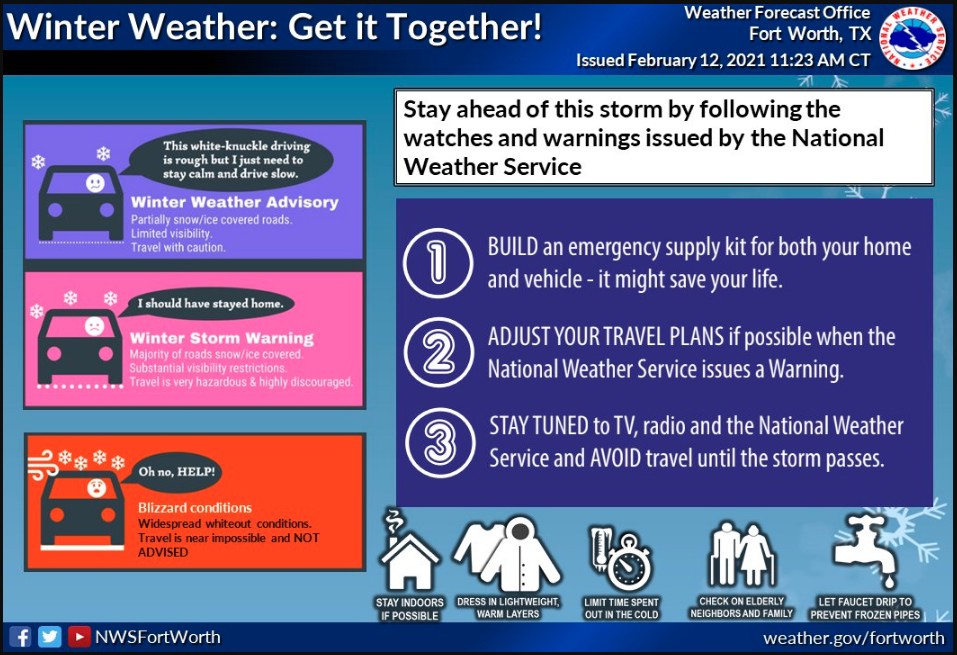 An intrusion of bitterly cold temperatures combined with an active storm track emerging out of the Pacific and Gulf of Mexico will lead to a myriad of winter weather hazards across the continental U.S. this weekend, NWS forecaster Mullinax noted in Short Range Public Discussion issued 08:19 UTC on Saturday, February 13.

Starting in the East, areas of low pressure riding along a quasi-stationary boundary off the Southeast coast induce showers and thunderstorms from the Carolinas to Florida, Mullinax said.

Flash Flood Watches are in effect for parts of the Florida Panhandle and both southern Georgia and Alabama this weekend where over 50 mm (2 inches) of rainfall is expected.

Winter Weather Advisories extend from northern North Carolina to the Delaware Valley where ice accumulations as high as 6 mm (0.25 inches) are possible into Saturday evening.

Up to 13 mm (0.5 inches) of ice is possible in these areas, with downed tree limbs and power outages expected. Hazardous travel conditions will be common throughout these areas of the Mid-Atlantic Saturday night and into Sunday morning, February 14.

A major winter storm is unfolding in the West as a deep fetch of Pacific moisture clashes with very cold temperatures from the Pacific Northwest to the Intermountain West.

Significant snow accumulations are expected in western Washington and Oregon with dangerously icy conditions also possible in the Willamette Valley into midday Saturday.

Heavy mountain snow is anticipated in the higher elevations of the West on Saturday, including portions of the Great Basin and some lower-lying valleys as well.

By Sunday, a deepening upper trough over the Four Corners region and well below normal temperatures entrenched throughout the Plains foster an environment favorable for disruptive snow and ice accumulations in the South-Central region.

The central and southern Plains can expect a snowy Sunday with blustery winds helping to cause whiteout conditions and high snowdrifts.

The latest forecast through Sunday night calls for as much as a foot of snow in parts of Oklahoma and the Texas Panhandle. By Sunday night, an icy wintry mix is forecast to set up from southern and eastern Texas to the Lower Mississippi Valley.

Travel conditions Sunday night into Monday morning in these areas will be treacherous with some roads becoming impossible to travel on safely.

Look for moderate-to-heavy snow to develop over the lower Great Lakes and into the northern Mid-Atlantic by Monday morning.

Winter Storm Watches have been posted for parts of the Ohio and Tennessee Valleys in response to the growing threat for heavy snowfall and dangerous ice accumulations.

On top of all the disruptive wintry weather and precarious travel conditions, teeth-chattering cold continues across the Nation's Heartland this weekend and into the first half of the upcoming week.

Numerous daily record low max temps are likely to be broken from the Northwest to the Plains. High temperatures are forecast to be in the single digits in the Central Plains and Midwest today, then struggle to get above zero on Sunday.

Actual low temperatures in the northern Rockies and Plains are forecast to be as cold as -30 °C (-34 °F). Add in gusty winds and the result is life-threatening wind chills between -34 to -51 °C (-30 to -60 °F)  in the North-Central U.S. Wind Chill Advisories extend as far south as the Southern Plains and look to persist into the start of the work-week.