Delta made landfall at 10:45 UTC on October 7, 2020, along the northeastern coast of the Yucatan Peninsula, near Puerto Morelos, as a high-end Category 2 hurricane with maximum sustained winds of 175 km/h (110 mph). The storm is now heading toward Louisiana, U.S., with landfall expected before 19:00 LT on Friday, October 9.

The storm weakened into a Category 1 hurricane as it moved over Yucatan, damaging trees and powerlines, and causing other structural damage throughout the peninsula.

A 65-years-old man died in Tizimin before the arrival of the storm after falling from the second floor of his house during preparations. Two others were injured in separate incidents before Delta's arrival.

At least 9 people were killed in Yucatan, Tabasco, and Chiapas States after floods and landslides. Over 35 000 people have been evacuated to temporary evacuation centers in Yucatan.

Delta strengthened back to a Category 2 hurricane by 06:00 UTC on October 8.

The system had maximum sustained winds of 155 km/h (100 mph) and minimum central pressure of 973 hPa. 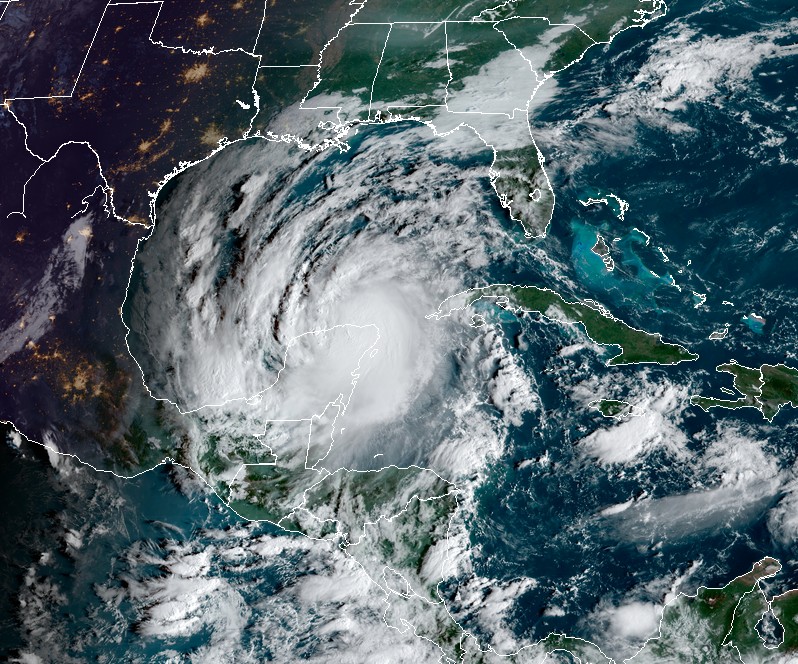 On Tuesday, October 6, Louisiana Gov. John Bel Edwards declared a state of emergency, allowing the state to begin its preparations and to assist local governments as they respond.

"Everyone in South Louisiana should pay close attention to the weather in the coming days and heed the advice and directions of their local officials. Now is the time to make preparations for Delta’s impacts."

"All of Louisiana’s coast is in the tracking cone, and we are well aware that impacts can be felt outside of the track," Edwards said Tuesday.

More than a dozen Louisiana cities or parishes have issued evacuation orders or recommendations ahead of the town, including Cameron, which is still under a mandatory evacuation forced by Hurricane "Laura" ahead of its devastating landfall on August 27.

"We've actually never been lifted from the mandatory evacuation, so it’s kind of like there’s not supposed to be anybody down here," Cameron Fire Chief Tim Dupont told The Weather Channel Wednesday afternoon.

Just to give everyone an idea of the damage we haven't recovered from yet. This is an aerial shot of Lake Charles. Look at the blue tarps on all those roofs! pic.twitter.com/iNjoa8Idp1

The firefighters are among the only people who've come back to Cameron, and they've been living in trailers, TWC's Jan Wesner Childs noted.

"Very, very few people have returned," Dupont said. Electricity to the town isn't expected to be restored until January, assuming Delta doesn't set that schedule back even more.

By 09:00 UTC, Beta's center was located about 725 km (450 miles) SSE of Cameron. It is expected to become a major hurricane by tonight as it moves over the central Gulf of Mexico.

A Storm Surge Watch is in effect for:
– High Island, TX to Sabine Pass.
– East of Ocean Springs, Mississippi to the Mississippi/Alabama border.

A Hurricane Warning is in effect for:
– East of Sabine Pass to Morgan City, Louisiana.

A Tropical Storm Warning is in effect for:
– San Luis Pass, Texas to Sabine Pass.
– East of Morgan City, Louisiana to the mouth of the Pearl River, including New Orleans.
– Lake Pontchartrain and Lake Maurepas.

A Tropical Storm Watch is in effect for:
– East of the mouth of the Pearl River to Bay St. Louis Mississippi.

On the forecast track, the center of Delta will move inland within the hurricane warning area Friday afternoon or Friday night.

According to the NHC, the water could reach the following heights above ground somewhere in the indicated areas if the peak surge occurs at the time of high tide:

The deepest water will occur along the immediate coast near and to the east of the landfall location, where the surge will be accompanied by large and dangerous waves. 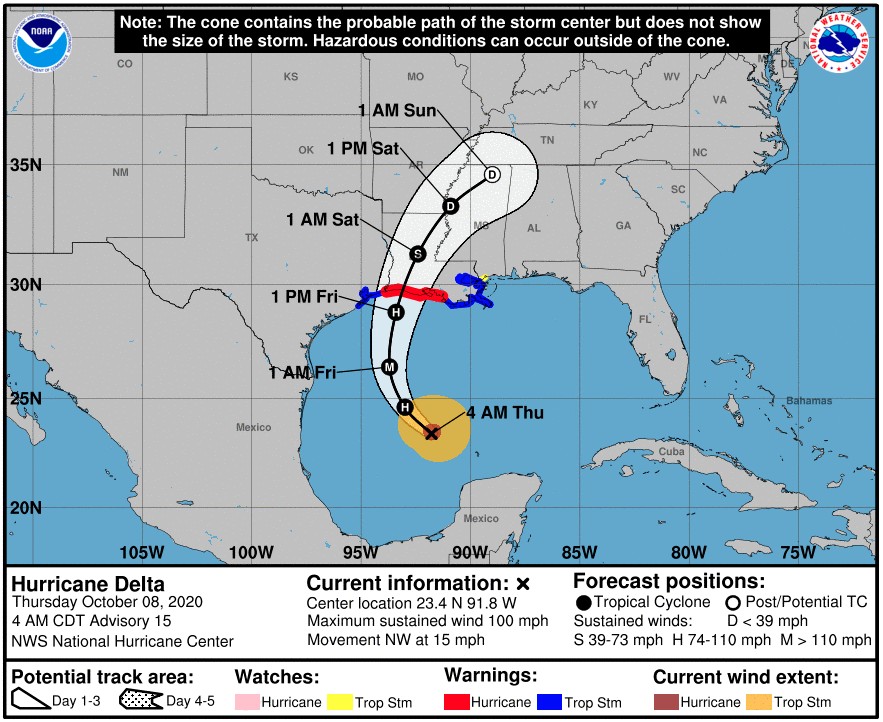 Friday through Saturday, Delta is expected to produce 125 – 250 mm (5 to 10 inches) of rain, with isolated maximum totals of 380 mm (15 inches), for southwest into south-central Louisiana. These rainfall amounts will lead to significant flash, urban, small stream flooding, along with minor to isolated moderate river flooding.

As Delta moves farther inland, 25 to 75 mm (1 to 3 inches) of rain, with locally higher amounts, is expected in the Ohio Valley and Mid Atlantic this weekend.

A few tornadoes are possible late tonight through Friday over the southern parts of Louisiana and Mississippi.

Swells from Delta will begin to affect portions of the northern and western Gulf coast later today. These swells are likely to cause life-threatening surf and rip current conditions.

NW motion with a reduction in forward speed is expected this afternoon (local time), followed by a turn toward the north by late tonight, and a north-northeastward motion by Friday afternoon or Friday night. 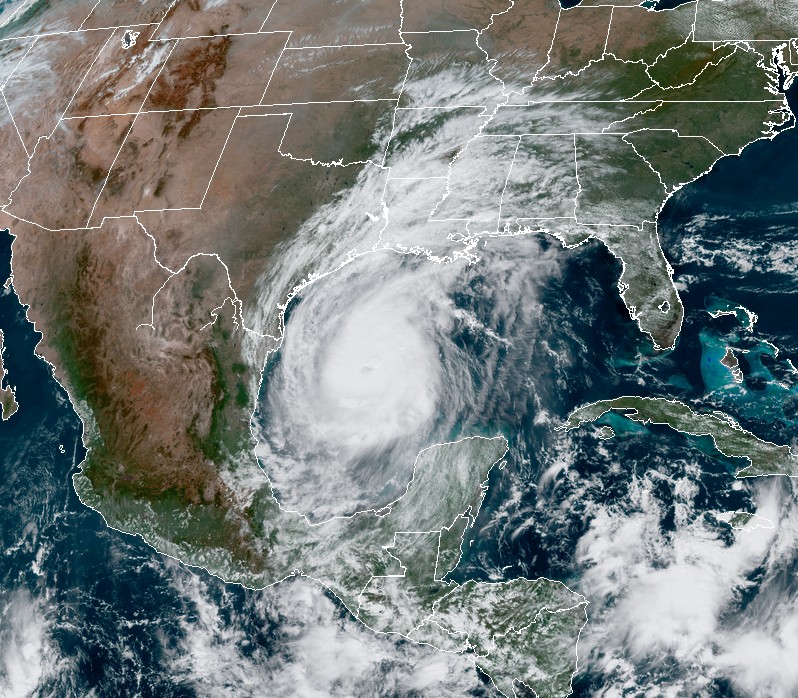 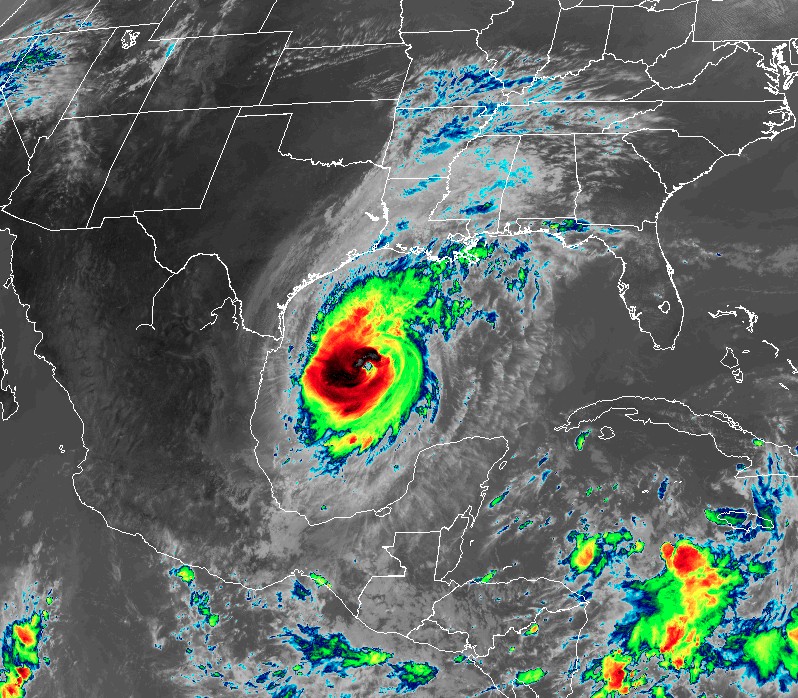 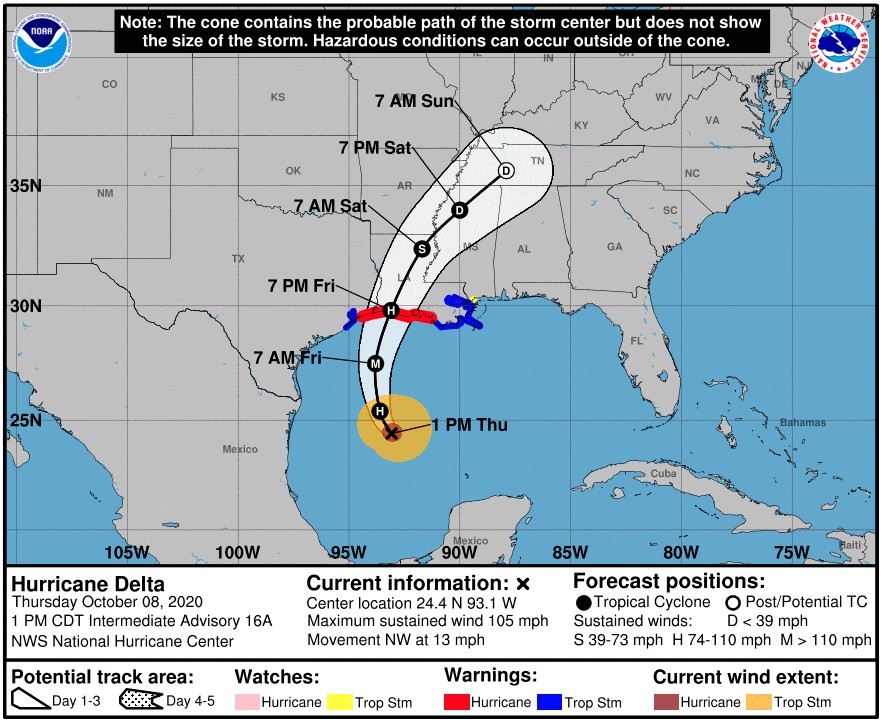